With the 10th pick in the 2014 MLB Draft, the Mets can potentially draft Kyle Schwarber. Who is Schwarber and would he be worth selecting? 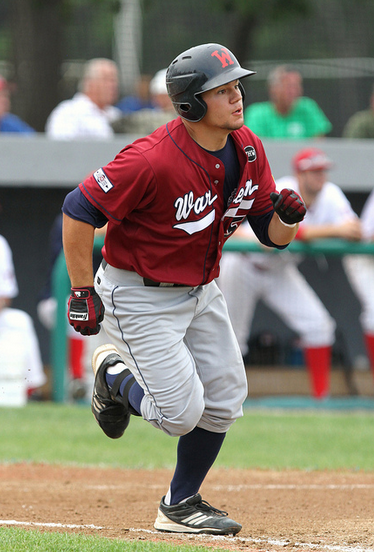 Despite being a Second Team All-Ohio linebacker selection in high school, Kyle Schwarber's main sports focus was always baseball. And despite a .408 batting average and 18 home runs, many would characterize Kyle Schwarber's high-school baseball career as something of a disappointment. After missing significant time during his junior year, Schwarber missed nearly a month and a half of playing time due to an arm injury. As a result, he went unsigned out of high school and attended the University of Indiana. Whether or not he would have signed with a team out of high school if they did approach him is anyone's guess, but fully healthy and more mature, both physically and mentally, Kyle Schwarber is now considered one of the premier talents in the entire 2014 draft class. "I see that as a blessing right now", he has said.

As a freshman, Schwarber had a season that took the league by storm. "He's kind of a well-kept secret", said Indiana coach Tracy Smith. "It's always funny with the venues we play in or some of the coaches we face from some of the Southern conferences. They're like, ‘Who's that guy? Where did you get that guy?'" Fully healthy, Schwarber put up the numbers many knew he was capable of, hitting .300/.390/.513 for the season. Ranking in the top ten in seven offensive categories, he was named Big Ten Freshman of the Week three times, was a unanimous selection to the Big Ten All-Freshman team, and was named Louisville Slugger Freshman All-American by Collegiate Baseball newspaper. Amazingly, Schwarber didn't even start out as the Hoosiers' primary catcher. He was given the opportunity to play the position when the incumbent transferred out of Indiana University. He certainly took the ball and ran with it.

As a sophomore, Schwarber only got better. Despite dedicating much of his free time to improving behind the dish, his offensive game took a huge step forward as well. Hitting .366/.456/.647 on the year, he was named the best catcher in the country by Perfect Game USA and the National Collegiate Baseball Writers Association. His 18 home runs, .647 slugging percentage, 152 total bases, .456 on-base percentage, and 42 walks led the Big Ten, comparing very favorably to the best collegiate players across the country. In his junior season, more of the same: His .340 batting average, .450 on-base percentage, and .615 slugging percentage were among the best in college baseball.

Schwarber's best asset is, of course, his bat. He isn't the tallest player, but his frame is very thick and muscular, and he has been able to tap into that core strength to generate a lot of power over the course of his high-school and collegiate career; his 18 home runs in 2013 ranked third among all collegiate players in the country. When not punishing pitchers by depositing their offerings into the stands, Schwarber has shown himself to be a competent hitter overall, using the entire field and understanding how to work counts. Though capable of putting up above-average power numbers, he doesn't completely uppercut his swing. It is fairly level and linear, giving him the ability to hit for average in addition to power. He has had trouble with pitches inside over the course of his career, a hole stemming from his long swing and thick frame, but with a shorter stroke and some thinning out, that weakness could be eliminated.

Defensively, Schwarber has a few things going for him, but the sum of those individual parts is an average projection at best. He has a strong arm, but takes too long transferring the ball and popping up to throw out runners with any kind of regulatory. Still, Schwarber has made progress in that regard, improving to a 33% caught stealing rate after posting only a 19% rate in 2013, so the hope is that with more streamlined mechanics he can be more effective at nabbing baserunners. Though he's been fairly competent catching the Indiana Hoosiers' pitching staff, he's struggled in national competitions catching pitchers he was less familiar with.

His body looks like it would be durable enough to play the position, but given his defensive shortcomings he is unlikely to stick at catcher. If moved elsewhere on the diamond, he doesn't lose all of his positional value, as Schwarber is probably athletic enough to play in the outfield. His arm would undoubtedly be strong enough for right field, but he doesn't seem to have the requisite speed to play the position. As such, he might be consigned to left field or, if all else fails, first base. The ability to split any or all of those positions while still being regularly penciled in as catcher is a valuable versatility.

Schwarber's a little divisive as a prospect, in large part because many scouts don't believe he'll stick behind the plate. They have a point. While Kennesaw State's Max Pentecost profiles as an average defensive catcher, Schwarber isn't so lucky, possessing a less athletic frame and slower reactions behind the plate. Despite this, I like his chances a little more than most, due to his work ethic and the fact that he's shown clear, incremental improvement across the board each season he's been back there. The arm strength is actually pretty good, and he really just needs to clean up his release and become a little lighter on his feet, which is certainly what is most worrisome about his defense. The odds are still better that he'll end up at first, but I am more optimistic than most.

At the plate, he has plus raw power and patience. I do wish he'd calm down his swing a touch, but I have been impressed with his ability to turn on inside fastballs despite not having much of a hand load—it really illustrates how strong Schwarber's lower body is and how efficient his weight transfer is.