With the 10th pick in the 2014 MLB Draft, the Mets can potentially draft Bradley Zimmer. Who is Zimmer, and would he be worth selecting? 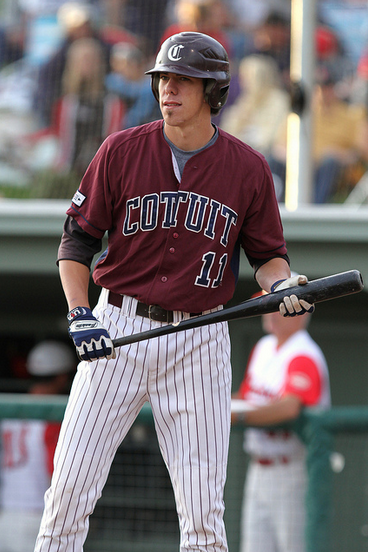 Bradley Zimmer comes from a family of athletes. His mother Cathy ran track in college at San Diego State University, his father Eric played baseball at University of California at San Diego, and his brother Kyle was drafted fifth overall in the 2012 Major League Baseball amateur draft and is not only one of the best Kansas City Royals prospects, but one of the best prospects in baseball today. It should come as no surprise, then, that Bradley is highly regarded himself, and is poised to be a top draft selection this year.

A well-decorated, well-regarded player on his high school baseball team, Zimmer followed in his brother's footsteps and went to the University of San Francisco. He started 42 games in his first year there, the most of any freshman on the team roster, playing mostly right field. While he held his own against older, more polished players, he didn't exactly impress, hitting .242/.274/.314. Still, the team as a whole didn't exactly light the world on fire, and as a result, he ranked among the team leaders in a few offensive categories, including doubles, triples, and stolen bases. He bulked up for the 2013 season, adding about fifteen pounds to his big 6'5" frame, and that paid massive dividends. He hit .320, got on base at a .437 clip, and slugged .512. His highlight that season was a 13-game hitting streak, from February 26 to March 22. He attended the Cape Cod Baseball League that summer, and while his stats were nothing too spectacular because he only played sixteen games there, he won the the CCBL playoff MVP award.

Zimmer lived up to the high expectations in 2014, hitting .369/.456/.579 in 52 games. He once again had a lengthy mid-season hitting streak, this time getting to 19 games, from Match 8 through April 10. He ended the season among the leaders in eight different offensive categories: batting average, on-base percentage, slugging percentage, home runs, triples, total bases, runs scored, and stolen bases. Perfect Game USA ranked the junior the sixth-best college prospect in the country, while Baseball America ranked him the eighth-best collegiate player.

Offensively, Zimmer has a somewhat unorthodox swing that produces solid line drive contact but little more at this point, as he doesn't lift the ball very much. Some don't see that swing as ever adding enough loft to balls to make him much of a power threat, but at the same time, Zimmer is a big, strong kid. He should grow into additional power. The swing is a bit long, leaving him vulnerable to strikeouts at times, but his plate discipline has grown exponentially since he first began his collegiate career. The youngster has maintained roughly a 1:1 strikeout-to-walk ratio for two straight years. He also has a bit of speed and is an above-average runner that has a "second gear." He has bona fide double-digit stolen base speed on the basepaths, but he needs to better pick and choose his spots to cut down on his caught stealing rate. He led off for the University of San Francisco for most of 2014 and much of 2013, but he profiles better further down the order—just not in the middle of the order right now.

Defensively, Zimmer has an above-average arm, and he is able to tap into his speed to cover a lot of ground in the outfield. He primarily plays right field but can navigate center field as well. Center field has been more of a secondary position for him than a permanent home, but some scouts are unsure which position he is more suited for going forward. Those that see him as a right fielder cite his strong arm and the additional defensive burden of center field, something they doubt he will be able to handle. Those that see him as a center fielder cite his passable defensive chops there and the fact that they do not see him possessing or developing the necessary offensive power to be penciled into an MLB lineup as a right fielder.

Most scouts agree that Zimmer has five-tool potential, but a few of his tools need some refinement.

Zimmer's the enigmatic college hitter of this year's draft, a lean, 6-foot-5-inch hitter with above-average speed and the potential to play center field as a pro. It's easy to imagine him using those long arms to leverage the ball over the right field fence for home runs. Unfortunately, it just doesn't happen often due to just a terribly timed swing that has other inconsistencies. When he keeps his hands up and back and brings his weight forward at the point of contact, the ball will positively jump off his bat. Most of the time, however, he'll drop his hands before swinging and sometimes will move his front foot forward without bringing the rest of his weight off his back foot. This gives his swing an almost tentative appearance, almost like he can't decide if he wants to swing or not. If he gets that right, and if he adds a little muscle, he could be an average defensive center fielder who hits .280 with 20-plus homers. As it is, I see more of a .260 hitter with 10 homers who might be too big to stick in center. At the very least, he has the arm for right. Zimmer will go to a team that thinks they can clean up his mechanical issues, and there's star potential if he can.

"He's tough as nails, and he loves to play the game. He's got it all, except power right now. That's the tool they're not seeing; you've got to project that, and it will come. He's a gap guy now, but he'll learn to turn on the ball and hit 20 in the big leagues"