It wasn't a pretty night for Zack Wheeler or the Mets' lineup.

If you missed the Mets’ Friday night game in Colorado, you didn’t miss much. For the second straight night, the team fell behind in a big way early and never really threatened to come back. Zack Wheeler had the worst start of his young career, and the Mets’ lineup was mostly lifeless. 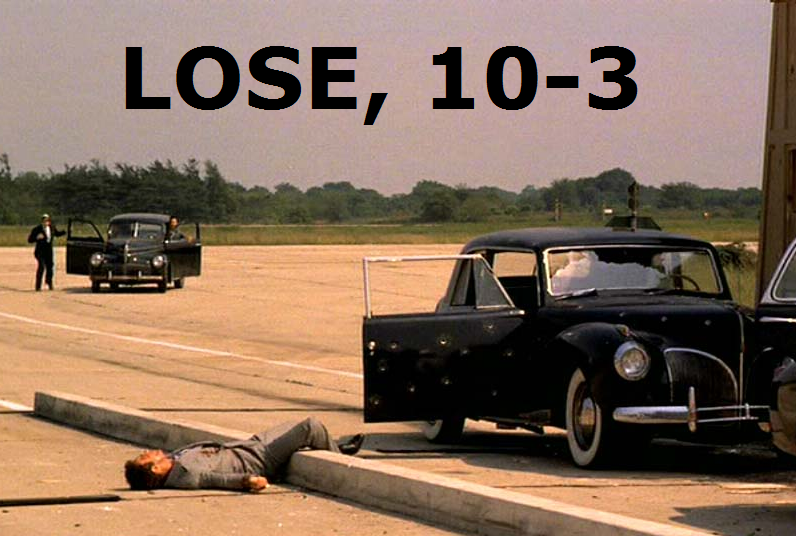 The Mets actually got off to a great start in the top of the first. Juan Lagares doubled, and Daniel Murphy followed up with a single to put runners on the corners with nobody out. A wild pitch by Jorge De La Rosa allowed Lagares to score the game’s first run and Murphy to advance to second base. But Murphy then tried to steal second off the pitcher, who stepped off the rubber and threw to third to retire him easily there. The Mets no longer had De La Rosa, who entered the game with a 5.23 ERA, on the ropes. Following a David Wright single, Chris Young and Curtis Granderson were retired to end what looked like a very promising inning just a few minutes earlier.

Things went south quickly in the bottom of the first. Wheeler gave up a leadoff single, walked the next hitter he faced, and gave up a run-scoring single to Troy Tulowitzki. With runners still and first and single, Justin Morneau doubled, scoring the lead runner and putting the other on third base. There was still nobody out.

A dribbler off the bat of Wilin Rosario went ever so slowly down the third base line, looking like it would roll into foul territory, but it never did. In fact, it took a turn away from the foul line and towards the infield grass before it came to a stop. The Rockies were ahead 3-1 with runners on the corners and still nobody out.Wheeler retired Corey Dickerson on a sacrifice fly to center, and Wilin Rosario mercifully retired himself, getting thrown out at second base on the play. One batter later, Wheeler was out of the inning, but the damage had been done.

The Mets didn’t score again through the fifth inning, but the Rockies did. They added two runs in the second when Tulowitzki singled with two outs in the inning. Both runs crossed the plate well before Tulowitzki was caught in a would-be rundown between first and second before giving himself up entirely. David Wright crossed the infield after cutting off the throw from the outfield on the play and tagged the motionless Tulowitzki himself. On the field, that might have been the highlight of the game.

Colorado’s seventh run scored on a Charlie Blackmon ground out in the fourth inning, partially thanks to the fact that the leadoff hitter in the inning reached on a throwing error by Ruben Tejada before coming around to score on the ground out. Wheeler finished the inning, but that was it for him. He allowed seven runs, six earned, on seven hits and two walks. He struck out only one opponent after striking out ten last Friday.

Games at Coors Field are never really over, of course, thanks to the hitter-friendly environment, and the Mets flirted with a full-fledged comeback in the sixth. Chris Young drew a leadoff walk, and Curtis Granderson hit a home run to right field to reduce the Rockies’ lead from six to four. Josh Satin walked and Travis d’Arnaud singled, but Ruben Tejada came up next and promptly grounded into a dispiriting double play. Bobby Abreu pinch hit for Jeurys Familia, who had thrown a scoreless fifth inning, but struck out looking to officially put the kibosh on the Mets’ best chance to get back in the game.

Carlos Torres took over on the mound for the sixth inning and threw a scoreless frame, but he was kept in for the seventh. That inning didn’t go so well. Charlie Blackmon homered to begin the inning, and back-to-back-to-back singles scored the Rockies’ ninth run of the game. A Wilin Rosario sacrifice fly plated the tenth. Torres retired the next two hitters he faced, but the Mets were again down by seven runs. Torres more than doubled his ERA on the season in the process.

Both teams went pretty quietly from there, not that the Rockies needed to be anything more than silent at the plate to secure their victory.

The teams will play the third game of the series on Saturday night at 8:10 pm EDT. Jenrry Mejia takes the mound for the Mets, while lefty Franklin Morales gets the start for the Rockies. 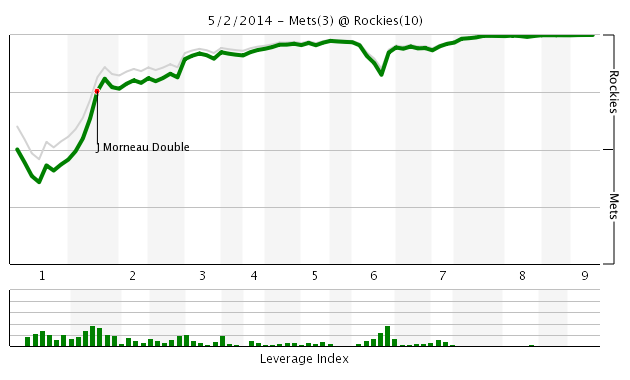