Mets vs. Rockies Recap: New York's relationship with Coors Field is on the rocks

After a couple of blowout losses, the Mets really looked like they were finally going to win a game in Colorado this weekend on Saturday night. They did not.

Share All sharing options for: Mets vs. Rockies Recap: New York's relationship with Coors Field is on the rocks

Step aside, Turner Field, for the Mets have met their match in Coors Field. After leading six-nothing early on Saturday night, the team blew the lead, came back to tie the game at eight, fell behind again, tied the game again, and retook the lead before surrendering a walk-off home run to the Rockies in the ninth inning. After a couple of blowout losses, this one made it feel like there isn’t any way the Mets will escape Colorado with a win. 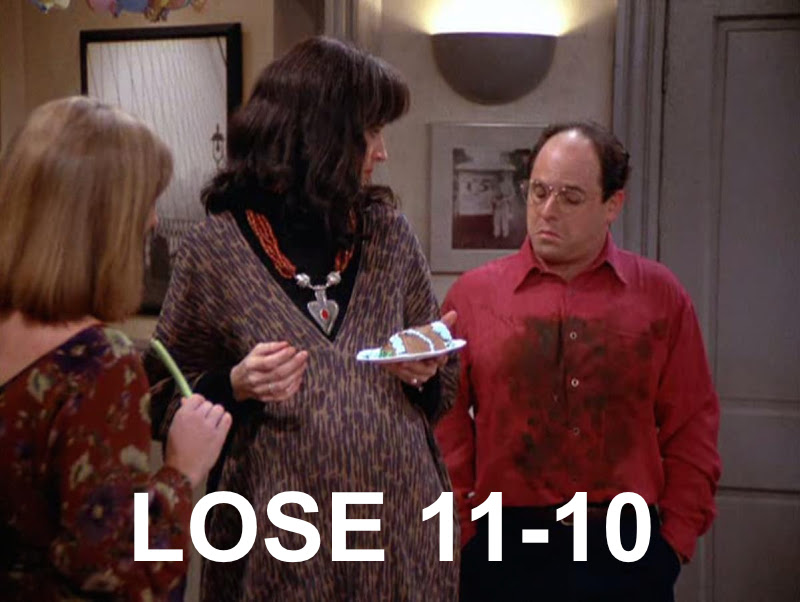 The game began well enough. Daniel Murpy tripled—barely, as the Rockies very nearly retired him at third base—with one out in the first inning, and David Wright doubled to score him. Later in the inning, back-to-back singles by Anthony Recker and Lucas Duda drove in a run apiece. Heading to the bottom of the first, the Mets were ahead by three.

Jenrry Mejia pitched without issue through the first two innings, and the Mets tacked on three more runs in the third. They scored, one at a time, on a Curtis Granderson single, an Anthony Recker double, and when Ruben Tejada reached base on the seemingly-impossible error by Colorado third baseman Nolan Arenado. So the Mets were ahead by six.

Mejia put up another zero in the third and did so again in the fourth. The fifth, however, was a pitcher’s worst nightmare. Ryan Wheeler led off with a home run. Jordnan Pacheco singled, and Mejia walked DJ LaMahieu. Pinch hitter Brandon Barns hit into what should have been a double play, but the Mets were only able to retire the runner at second base on the play, as Daniel Murphy’s throw popped softly out of Lucas Duda’s glove at first base.

Charlie Blackmon singled in a run, Drew Stubbs did the same, and Carlos Gonzalez made it three straight run-scoring singles. Mejia hit Troy Tulowitzki with a pitch to load the bases with still just one out in the inning. Despite a low pitch count, he had clearly come undone. Clinging to a 6-4 lead, though, Mejia stayed in the game to face Nolan Arenado, who launched a go-ahead grand slam. The Rockies were up 8-6, and Mejia’s night was finally over.

That’s two starts in a row that have seen Mejia implode in a middle inning after pitching well beforehand. His numbers the third time through the order in six starts this year are terrible. In five starts last year, he improved the second and third times through an opposing lineup. The totality of the sample is still small, but it’s not time to write off Mejia as a starting pitcher yet.

Daisuke Matsuzaka came in to finish off the fifth and retired the only two batters he faced in it. The ballpark being Coors Field, the Mets tied the game right up in the sixth. scoring once on a Chris Young double and again on a Curtis Granderson single.

Neither team scored again until the bottom of the seventh. With one out, Matsuzaka gave up a single and a double to put runners at second and third. Terry Collins had him intentionally walk Corey Dickerson to load the bases, and Jordan Pacheco hit a sacrifice fly to put the Rockies up 9-8. Matsuzaka retired the next hitter he faced, limiting the damage in what could have been a worse inning.

Again, the Mets quickly tied the game, this time on a single by Chris Young in the top of the eighth. Scott Rice took over for Matsuzaka in the bottom of the inning and allowed just a walk to Drew Stubbs in a scoreless inning.

The Mets finally reclaimed the lead in the top of the ninth against LaTroy Hawkins, as pinch-hitter Bobby Abreu hit a one-out double and gave way to pinch runner Eric Young Jr, who moved to third on a ground out by Josh Satin. Juan Lagares singled to plate him, and the Mets were up 10-9. Daniel Murphy singled, advancing Lagares to third, and he took second base on what was officially scored defensive indifference. The Rockies walked David Wright to load the bases, but Chris Young—who had a great night at the plate up to that point—lined out to right field. The Mets could have used a few more runs.

Kyle Farnsworth came in to pitch the bottom of the ninth. He gave up a single to Troy Tulowitzki. Nolan Arenado hit a fly ball a long way to center field, but it stayed in the park for Juan Lagares to catch. Unfortunately for the Mets, Tulowitzki tagged up from first and reached second as Lagares’s strong throw was just a bit off line. Pinch hitter Charlie Culberson hit a walk-off home run to dead center, ending the game as Dinger, the Rockies’ mascot, continued to annoy the hell out of Mets fans behind home plate.

The series finale, if you’re stil interested in watching, is scheduled for 4:10 pm EDT on Sunday afternoon. 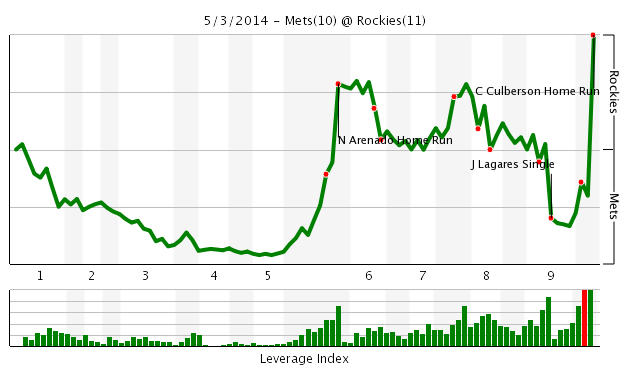