The forces of evil triumph as Henderson Alvarez hurls a complete game shutout against the Mets.

Share All sharing options for: Mets vs. Marlins Recap: Miami wins, universe deaf to our pain

I don't like the Marlins. At all. As a Mets fan, you're supposed to boo the Yankees or the Phillies or the Braves the most, but the Marlins are the only team I truly, deeply, sincerely despise. Watching them celebrate like Little Leaguers after shutting down Shea Stadium for good in the last game of the 2008 season is one of the truly traumatic experiences of my adult life.

Granted, the Mets are also to blame for this trauma for failing to beat the Marlins that day. Also, there is not a single player remaining on the Marlins roster now who played for that '08 team. The Marlins have changed their color scheme and their stadium and even their name since then, eschewing Florida for Miami. I don't care. I still want nothing good to happen to the Marlins, and every time something good does happen to them, I feel the universe has failed us all.

I realize such a flat-out admission of bias hurts my journalistic credibility. Fortunately, I've never claimed to be a journalist or have integrity. So while the Mets' second loss in Miami was less of a gut punch than the first, it still bugs me to no end. 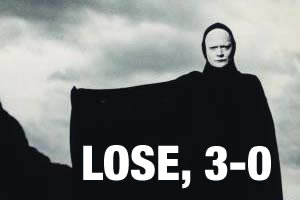 Bartolo Colon was coming off a rather rough outing in the chilly climes of Denver, but the tropical air of Miami didn't seem to do him much good, either. With one out in the bottom of the first, he plunked Derek Dietrich, who has been known to take one for the team. (Or stand right on top of the plate and dare the pitcher to throw inside, also known as the Chase Utley Shuffle.) Giancarlo Stanton followed by crushing one to straightaway center field. The Mets had to feel fortunate when this Stantonian blast bounced off the wall for a one-run double instead of a two-run homer. The reprieve did not last long, however, as Casey McGehee soon singled home Stanton. As things would turn out, that second run would prove patently unnecessary.

Colon escaped that inning without further damage, aided by McGehee getting thrown out while attempting to go from first to third on a single, then worked around a leadoff hit in the second, and induced an inning-ending GIDP from McGehee in the third. Colon also negotiated a two-out error by Daniel Murphy in the fourth. All in all, he had a good night in Miami, which is more than anyone else in a Mets uniform can say.

Colon's teammates could do very little against Marlins starter Henderson Alvarez. It wasn't that Alvarez was especially overpowering or tricky. The Mets had simply acquired one of their periodic bouts of Miami-itis, a condition that renders any effort they make in south Florida completely pointless. Symptoms include fatigue, futile swings, and constant feelings of dread stemming from unrelenting thoughts that nothing they do in Miami will result in a win.

Case in point: David Wright singled with two out in the top of the first, then saw Marlins hurler Henderson Alvarez whip a pickoff throw past the first baseman. In a typical bit of Mets-in-Miami luck, that throw bounced off the stands and into the waiting arms of Derek Dietrich, allowing him to throw out Wright by a healthy margin as he broke for second. The Mets proceeded to go down in order in the second and third.

The Mets mounted one of their few threats in the top of the fourth when Juan Lagares belted a leadoff double into the right field corner. A grounder moved Lagares to third, meaning all David Wright needed to do to plate the first Mets run was hit a fly ball to the outfield. Wright managed a hard line drive to center, but Marcell Ozuna picked it off for the second out, at a spot too shallow for Lagares to safely tag up and score. Curtis Granderson followed with another hard hit ball, but not hit so hard that Stanton couldn't run it down in right field.

At this point, it occurred to me that maybe the Marlins aren't stealing signs, as the Braves suspected. Perhaps they've cast a spell on their home ballpark that causes their own BABIP to increase in indirect proportion to the visitors'. Miami's hits all seemed just fall in or zip past gloves, while the Mets' contact seemed to go the exact opposite way. Such outcomes could also be explained by the teams' respective fielding abilities or defensive positioning, but I prefer to blame black magic, because the Marlins are evil.

Witness the fifth inning. In the top half, when Lucas Duda snuck a one-out single up the middle, this weak base hit felt like a small miracle. It was soon rendered moot by a Travis d'Arnaud grounder that went for a double play. The Marlins provided stark contrast in the bottom half, collecting back-to-back two-out singles on broken bat parachutes by Dietrich and Stanton. That set things up nicely for McGehee, who laced his own single to shallow center, scoring the Marlins' third run.

Witness also the top of the sixth, when the Mets attempted their own two-out rally. Lagares was hit by a pitch while trying to pull back a bunt, then Murphy doubled to put two runners in scoring position. This put the Mets in a perfect position to strand some more runners, which they did when Wright ground out to short. Or hey, why not take a look at the seventh, when a potential hit by Chris Young was robbed at the third base line by McGehee, who is not exactly Brooks Robinson.

Colon continued to pitch, if not spectaculary, then at least efficiently, as he set Miami down in order in the sixth and seveth innings. His pitch count was reasonable after the seventh, but the Mets were all but forced to pinch hit for him in the top of the eighth. Eric Young batted in Colon's place that inning, and the only difference between his performance at the plate and what Colon might have done is that EY can't provide comic relief by swinging a batting helmet off his head. Young struck out looking for the third out.

With Colon out of the picture, the Mets turned to Jose Valverde to pitch the bottom of the eighth. He promptly walked the first batter he faced, Stanton, who also executed a rare (for him) steal of second. Valverde imitated some relief pitcher not named Valverde by striking out the next three batters in a row to escape danger.

Theoretically, this gave the Mets some semblance of a chance to rally in the top of the ninth. Lagares unwisely swung at the very pitch he saw and popped out. Murphy made Alvarez work a bit harder, seeing eight pitches before belting a double to right-center. In his first RBI opportunity of the game, Wright emulated the first two by grounding out to second. And since so many games have already ended with Curtis Granderson striking out swinging, this one might as well have, too. So it did.

In conclusion: The Marlins won, proving the universe hates us all and wants us to be unhappy. 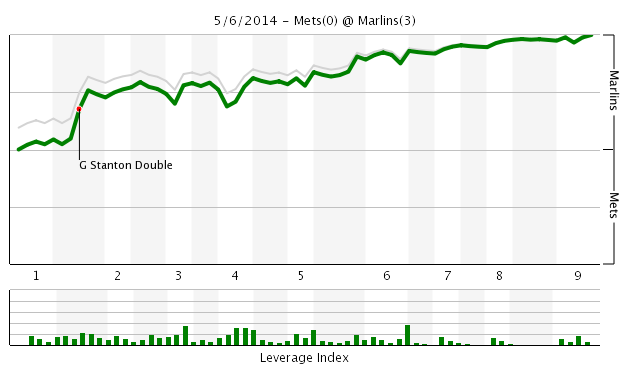