In his Mets debut, Taylor Teagarden belted a sixth inning grand slam that proved the margin of error in snapping the team's six-game losing streak.

For the last week, while watching the Mets, it was difficult for fans to believe that they would ever win another game. Sheer probability said they would, but you'd be hard pressed to think so while watching them build feeble leads in Chicago and San Francisco, only to blow them all.

It fell to Daisuke Matsuzaka to be the stopper tonight. While the pitcher acquitted himself well enough, the longball would prove the Mets' saving grace, as homers accounted for the entirety of their runs. They even managed to hit them with men on base, with the biggest blow coming from a guy who last played for a team called the *consults media guide* 51ers? No, that can't be right. 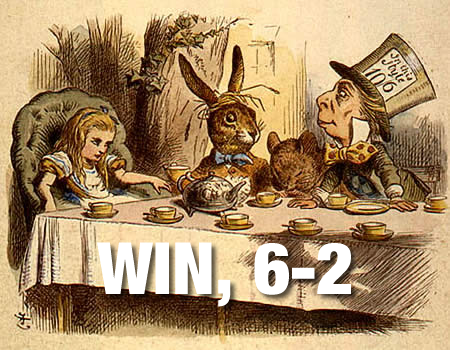 Matsuzaka pitched much the same way he has all season, turning in an unglamorous but solid outing. He didn't exactly erase memories of his rough outing in Chicago, but he kept Milwaukee off the board in the early going. A pair of walks in the top of the first were stranded, and his second inning went smoothly with 2Ks and a groundout. In the third, Dice-K allowed a leadoff single to his opposite number, Marco Estrada, and a two-out hit to Jonathan Lucroy, but induced a fielder's choice from old friend Carlos Gomez to end the inning.

Meanwhile, the Mets batters picked up right where they left off on their deadly 11-game road trip, which is to say nowhere. They went quietly in the bottom of the first against Brewers starter Marco Estrada, save for a long fly ball from Ruben Tejada that stubbornly refused to leave the yard. Chris Young bunted his way on with one out in the second and stole a bag, but that's as far as the rally went.

Two quick outs to start the bottom of the third didn't bode well for the home nine either, but Tejada turned in a tough at bat and worked a walk. That brought to the plate Daniel Murphy, who spent his off day giving a speech at 1600 Pennsylvania Avenue on the subject of paternity leave (and implicitly telling a certain drive-time sports yakker where he could stick it). Murph transitioned back from pol to pull hitter by belting a fat pitch barely over the fence in right field—a spot where no lefty but Chase Utley has thought to hit a ball—for a two-run homer.

Throughout the latter half of their roadtrip, the Mets had no problem taking early leads. Keeping them was another matter, and that pattern looked like it might play itself out immediately after Murph's dinger. With one out in the fourth, Matsuzaka nailed Khris Davis with a pitch. Lyle Overbay then snuck a double down the right field line, and Davis, who was running on the play, scored easily to cut the Mets' lead in half. Dice-K caught a break shortly thereafter when Overbay tried to run to third on a grounder hit in front of him and was tagged out by a mile.

Milwaukee's threats ended there, and the rest of Matsuzaka's evening was punctuated by jam-eluding. The top of the fifth began with a free pass issued to the adorably named Scooter Gennett (who I think was friends with either Dobie Gillis or Gidget), but Dice-K recovered by inducing a GIDP from Ryan Braun, and caught Lucroy looking to end the frame. The sixth started even rougher for the pitcher, as a line drive off the bat of Gomez nailed him in the back of the right leg. Somehow, he had the presence of mind to track down the ball and throw out Gomez before collapsing to the field in a pained laugh-cry. The shot didn't have any adverse effects, as Matsuzaka retired the next two batters with little trouble.

Over this stretch, the game had felt eerily similar to the bulk of the Mets' recent roadtrip, because while Matsuzaka held down the fort, his teammates made few threats to add onto their lead. After going down 1-2-3 in the bottom of the fourth, Matt den Dekker hit a one-out single in the fifth and moved to second on a sac bunt. That was as far as he got, however, as Tejada lined out to left.

The sixth looked like it would play out in a similarly frustrating fashion. David Wright and Curtis Granderson walked with one out in the sixth, and after Chris Young struck out, Lucas Duda took four wide to load the bases. Lately, the Mets have been putting tons of runners on base—not for baseball but for science, so they can see how many ways those runners can be stranded. In this particular case, three walks left the bat in the hands of the recently recalled Taylor Teagarden, who switched places with Travis d'Arnaud and fit right into the Mets' offense by striking out in his first two at bats. He did not appear a likely candidate to end the Mets' allergies to RISP.

Amazingly, the catcher took a cue from Murph and lofted a ball into Utley's Corner, where it bounced on top of the fence and into the crowd. Barely a grand slam, to be sure, but still worth four runs. In so doing, Teagarden became the first Met to hit a grand slam in his team debut since the immortal Colin Cowgill did it on opening day in 2013. More importantly, his blast gave the Mets a 6-1 lead.

With five runs to play with, the Mets swapped a bruised Dice-K for Vic Black in the top of the seventh. He allowed a leadoff single by Overbay, but erased him by getting Juan Sgeura to bounce into a groundball double play.

Things got a little dicey in the top of the eighth, when Jeurys Familia took the mound and gave up a leadoff single to Gennett and, after a strikeout of Braun that pleased the crowd (and the broadast booth, who stuck it to Braun all night), hit Lucroy in the ribs to put two men on base. Gomez then belted a double to the gap in right-center that scored Gennett. The Brewers were in a prime position to launch themselves right back into this game, but Familia fanned Aramis Ramirez and Khris Davis to wriggle off the hook.

The Mets had a few chances to expand their lead late, but couldn't convert. In the seventh, Tejada hit a one-out double against new Milwaukee hurler Mike Fiers and Murphy walked, but neither would come around to score. Chris Young reached in the eighth when a line drive bounced off Gennett's glove, but Zach Duke struck out Duda and got Teagarden to bounce into an inning-ending double play. What a bum, that Teagarden. What have you done for us lately, ya bum?!

Jenrry Mejia made these failures immaterial, as he set down the Brewers in order in the top of the ninth, capping the night with a K of Irving Falu (one of my favorite Bob & Ray characters).

In summary: The Mets hit more than one homer with men on base, did not relinquish a lead, and wrapped up their first victory in over a week in less than three hours. Made it look easy, too. Maybe they should try this "winning" fad more often. 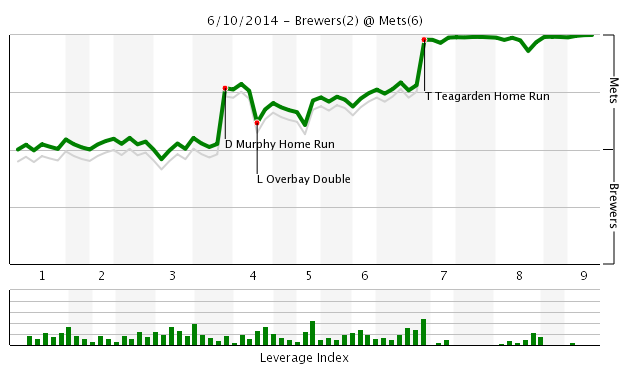