Who will represent the Mets at the All-Star Game?

David Wright is currently the leader at third base in National League All-Star voting but if he doesn't win, who will represent the Mets at the 2014 All-Star Game?

Share All sharing options for: Who will represent the Mets at the All-Star Game?

Unlike in 2013, when Matt Harvey and David Wright kicked ass for the Mets in the first half of the season, there are no obviously-deserving All Stars on the Mets roster. So who will be the Mets' representative to the All-Star Game at Target Field in Minneapolis on July 15, 2014?

Should Wright win the voting at third base, which he is currently leading, the question will have an easy answer. But he leads second place Nolan Arenado by fewer than 100,000 votes, and hasn't exactly been tearing the cover off the ball. Arenado has a broken finger, and likely won't be back before the All-Star break. However, Pablo Sandoval is in third place and has a history of late surges to claim the starting spot. Perhaps he could overtake Wright in the voting.

If Wright doesn't win, a Mets representative will have to be selected. I'll assume that the Mets won't have multiple representatives this season. Here are several players who might be worthy of the honor:

It hasn't been fun watching D-Wright struggle through the first half. His walks and power are down and his strikeouts are up. Bad luck hasn't been to blame. Furthermore, his defense looks worse than it did in each of the last two seasons. Matt Carpenter, Todd Frazier, and Anthony Rendon are all probably more deserving of making the team, strictly based on performance. Still, he's David Wright, and MLB is featuring him in All-Star Game promotional materials: 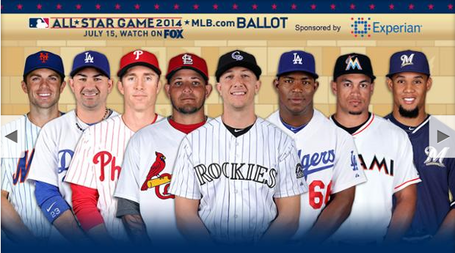 Maybe he'll catch fire in late June to prop up his reputation-based case. He's due for a hot streak.

Murph has been the second- or third-best second baseman in the league this season. Chase Utley has been the best and will almost certainly win the vote. Neil Walker has also played well and his numbers are comparable to Murphy's. For the most part, it's been a standard season for Murphy: .300ish average, high contact rate, doubles power, and below-average defense. However, he's walking at a career-best rate of 8.3%, which has driven his OBP up to a terrific .361.

Walker has him beat in the power department but they're very close in overall performance. Both have been superior to Brandon Phillips, who has made the All-Star team in three of the last four seasons. Of the three Mets players listed here, Murphy is most deserving of a trip to Minneapolis.

Niese has been the Mets' best starting pitcher this season. He has the lowest ERA of any starter and is second to Bartolo Colon in innings pitched. However, his strikeouts-per-nine-innings rate of 6.28 is a career low, as is his swinging-strike rate of 6.1%. He's not missing bats like he used to and much of his success has been due to suppressing home runs.

There is stiff competition among starting pitchers in the National League. Stephen Strasburg, Johnny Cueto, Adam Wainwright, Tim Hudson, and Michael Wacha are just some of the hurlers having terrific seasons. It's been fun watching homegrown Niese enjoy a nice first half, but his chances of making the All-Star team appear slim.

If Wright isn't elected by fans, I bet he'll be selected as a reserve. He's more of a "name" player than Murphy, while Niese's competition is just too strong.

The All-Star rosters will be revealed the weekend of July 5-6. Vote in the poll below, which asks a different question than the one in the title of this post: "Which Mets player is most deserving of making the All-Star Game?"