Mets Uniform Review: So much navy blue, you'd think the Yankees were in town

The Padres and Brewers didn't bring the most exciting uniforms to Queens, but there were some interesting patriotic looks to consider from around the league.

Share All sharing options for: Mets Uniform Review: So much navy blue, you'd think the Yankees were in town 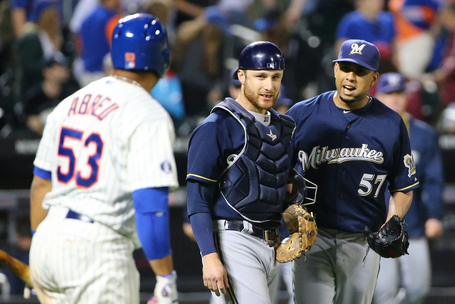 The Brewers wore their dark blue "Milwaukee" jerseys for their entire three-night stays in Queens, and it made me wonder about the uniform etiquette between home and road teams. For example, did the Brewers even bring their gray jerseys with them? What if the Mets wanted to wear blue one night? Would they yield to the guests, force the Brewers to wear gray, or would both sides wear blue like in one of those gross spring training games? Maybe this is all worked out beforehand? 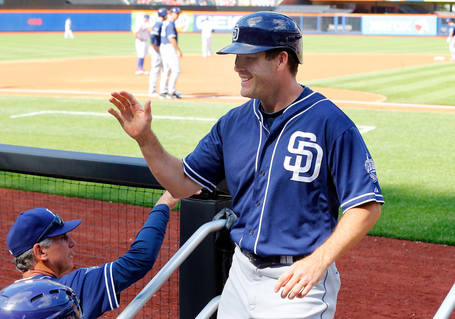 The Padres have a great history of colorful uniforms, but they currently sport the most boring duds in the majors. In fact, San Diego's standard road set is so plain, that it makes this humble blue outfit look flashy. I don't really mind the "SD" alternative jerseys, and they do serve to remind us that the Padres used to be a more colorful team, even in the post-brown era. Just a few years ago, they were experimenting with fun sand-colored road uniforms that were admittedly a little whacky. Regardless, the important thing is that they stood out, which is something we can't say about any of San Diego's current looks. Even the camoflauge uniforms are starting to blend in (get it?) now that the Mets, Reds, and other teams are emulating it. 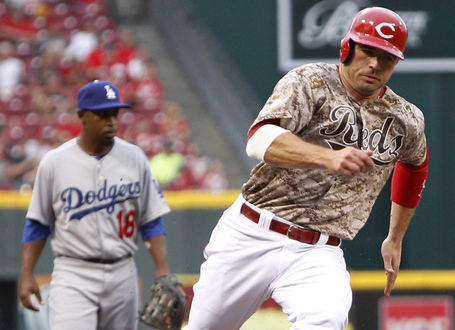 See, I told you the camo is getting popular. A little too popular, if you ask me, but I suppose if fans like it, you gotta wear it. Here are the Reds wearing a jersey that is not red, and it wouldn't be that big of a deal, except that the rest of their uniform is red. Red belt, red arm band, and a red helmet all do not go well with a camouflage jersey. At least when the Padres do this, they go all in with helmets and other accessories. The Reds went the cheap route, and they end up looking a little silly.

In the distance, you can see Chone Figgins sporting the Dodgers' "new" alternate road uniform. Before this season, the team had not worn "Dodgers" on the road since 1998, and the throwback look is solid, even if it is too close to the home design. For now, the team will go back and forth between wearing "Dodgers" and "Los Angeles" on the road, but don't be surprised if it chooses to go one way or the other exclusively in a year or two. 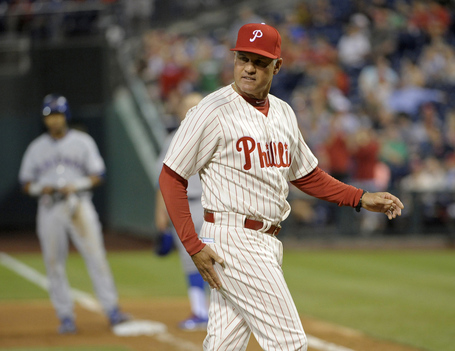 The Phillies hosted a retro weekend a few days ago, and what better team to entertain than the Cubs, who, as we explored last week, are already knee-deep in throwback jerseys this season. As you can see, the 1964 uniforms worn by Philadelphia aren't too much of a departure from what they wear today. The biggest difference is the altered "P" on the cap, while the cream color of the jersey is close to what the 2014 Phillies wear on their non-pinstriped outfit. 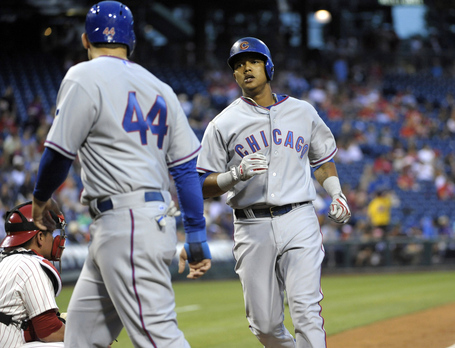 Did the Cubs ever look bad? I guess a franchise with a 100-year championship drought has to have something going for it, right? This isn't the club's best look throughout the years, but the red outline on the blue block letters gives the uniform a little flair that the monotone Phillies throwback lacks. The Cubs, like the Dodgers, have gone back and forth between wearing their team name and city name on the road, but I would suggest sticking with "Chicago" in the future. The four-letter "Cubs" can get a little awkward on a shirt when you don't have a dope script logo like the Mets do. 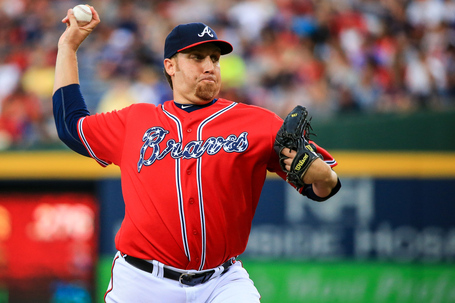 Yes, the Braves wore a jersey last week that made the team script look like the American flag. This is a little interesting because not too long ago there was a mini controversy regarding the Indians' logo appearing in a stars-and-stripes design. Most people don't have as big a problem with the Braves as they have with Chief Wahoo, but it's still a curious decision by Atlanta management given the winds of change surrounding the Chief as well as the Washington Redskins.

Do the stars in the "Braves" font have anything to do with the absence of the signature tomahawk on Atlanta's jersey? The Braves do occasionally wear an alternate cream-colored jersey with no tomahawk under the script, but that jersey has player numbers to make up for it. This new flashy alternate has neither a tomahawk nor numbers, making it look rather empty underneath the script.