The Mets opened a three-game series in St. Louis with a fairly uninspiring loss.

Coming into Monday night’s series opener, Cardinals pitcher Carlos Martinez had made just one major league start, though he had quite a bit more experience working out of a major league bullpen. Mets pitcher Jacob deGrom had just six major league starts to his name, but he’s pitched solely as a starting pitcher in his professional career. Martinez undoubtedly came out on top. 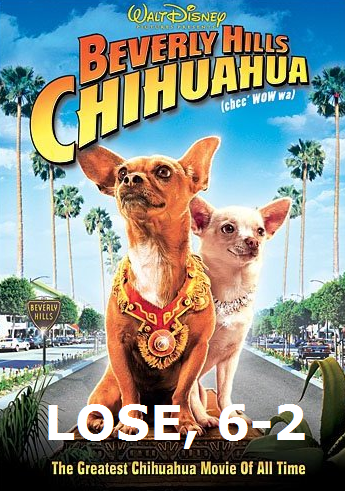 After the Mets went down in order—and quickly—in the top of the first, deGrom surrendered the first run of the game on a one-out walk and a pair of singles immediately thereafter. But he got out of the inning with a ground ball double play off the bat of Matt Adams—a temporary reprieve in what would become a long evening for deGrom.

Neither team scored in the second, but the Mets evened the score in the top of the third. Ruben Tejada drew a leadoff walk, and deGrom, who was hitting in the eighth spot of the Mets’ lineup, sacrifice bunted him to second base. Eric Young Jr. then reached on an infield single to short as Jhonny Peralta botched his throw to first base, and the Mets had runners on second and third. Curtis Granderson’s sacrifice fly tied the game at one, but the Mets weren’t able to score again in the inning.

The Cardinals took the lead again in the bottom of the third on a one-out single and a couple of two-out singles. With runners on first and second and two outs, Yadier Molina singled to left field, where Eric Young was playing as he returned from the disabled list, but Allen Craig was thrown out at the plate by Young by a wide margin.

In the fourth, the Mets got their best opportunity to grab the lead from St. Louis. Bobby Abreu walked, and Lucas Duda doubled. The Mets had men on second and third and nobody out, but they would not score. Taylor Teagarden popped out. The Cardinals intentionally walked Ruben Tejada. Jacob deGrom hit a hard line drive to the right side of the infield, but Cardinals second baseman Kolten Wong caught it. And Eric Young struck out swinging to end the inning and the Mets’ last real threat to win the game.

While deGrom threw a scoreless fourth, the Mets didn’t do much in the fifth. The Cardinals did, though. After a leadoff strikeout in the bottom of that ining, the Cardinals strung together a double-single-double-triple-walk-single sequence. By the time that was all over, the Cardinals were up 6-1, and Terry Collins turned to Dana Eveland out of the Mets’ bullpen.

Eveland got out of the inning without allowing another run to score, but the game went mostly quiet from there. The Mets put up a courtesy run in the eighth on a pinch-hit single by Chris Young, but that was pretty much it. 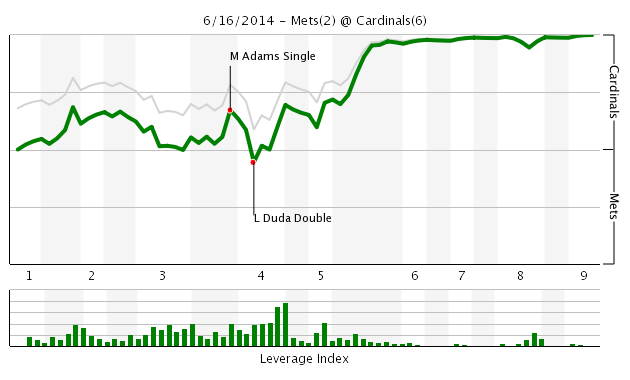