Like a bad improv team, the Mets fail to take suggestions from their scene partners and drop another ugly, punchless game in St. Louis.

Lately I've felt the same way about the Mets as I do about friends who keep inviting me to things on Facebook: I love you but I really don't want to go see your improv group. Because lately, the Mets do resemble improv. Bad improv. Really bad improv. Freshman year roommate who took a class in Clowning bad improv.

Witness Terry Collins catching a case of La Russa-itis in the Mets' first two games in St. Louis. La Russa-itis is a condition by which a manager makes moves that serve little purpose but to show just how hard he is managing. This condition has proven fatal to everyone who has suffered it, save its namesake. This explains why Collins made some curious lineup changes that wouldn't have looked out of place in an improv show.

Can I get a suggestion from the audience? Okay, I heard 'bat the pitcher eighth and start Eric Young for some reason'!

Jon Niese also seemed to be winging it tonight as he slugged his way through a good-not-great outing. But Niese's teammates failed to "yes, and" the pitcher, negating his repeated suggestions that gee, some runs would be nice by failing to hit for any appreciable amount of time.

I'd suggest the Mets hitters brush up on Truth in Comedy but they're already pretty comedic as it is, provided you root for the team that they're playing.

As might be expected, Michael Wacha retired the Mets in order in the top of the first. They got something of a chance in the second when Lucas Duda dunked a double into the left field corner and Anthony Recker walked. But when Ruben Tejada struck out swinging, that brought up Jon Niese one batter sooner than usual, and the pitcher dribbled a comebacker to Wacha to end the threat. The Mets forgot to go back their "where" and went quietly once again in the third.

Jon Niese allowed a one-out single to Peter Bourjos in the bottom of the first, but nothing else. He was not so fortunate in the second when Yadier Molina (perhaps you've heard of him?) belted Niese's first pitch of the inning just over the fence in left field. SNY pointed out the fact that this was Molina's first ever regular season home run against the Mets so, hey, good for him. Niese allowed a two-out single to Daniel Descaclo but stopped the Cards' offense at that point, then set them down 1-2-3 in the third.

In the top of the fourth, David Wright imitated the competition by smacking a Wacha pitch for a game-tying leadoff homer. For Wright, who has been suffering through a miserable season and an even more miserable June, it was his first longball hit on the road all season. It was a classic Wright homer, too, one where he reached down to get the ball and pulled it into the left field seats. Some more of those would be a welcome sight indeed.

With a run to his credit, Niese put up another zero on the board in the fourth and finished the frame with less than 50 pitches thrown. If he had any thoughts about getting a lead to work with, they were dispelled in the top of the fifth, when Eric Young singled and Curtis Granderson doubled with two outs. The Mets failed to find the game of this secene when Daniel Murphy strike out on a pitch in the dirt to conclude business.

Niese then contributed to his own troubles when he hit Descalco with a pitch to start the bottom of the fifth. After Wacha bunted him over to second, Niese struck out Bourjos, and an escape route appeared to be in sight. The Cards closed it off when Jon Jay zipped a hit just past Lucas Duda at first, easily scoring Descalco. The ball kicked around in the right field corner, allowing Jay to scoot all the way to third and score when Matt Holliday hit an almost identical ball down the left field line for a double.

Now two runs in arrears, the Mets once again put a pair of runners on base when Wright hit a leadoff double and Duda worked a one-out walk. This was obviously an attempt to start from the middle rather than present a bunch of boring exposition, a solid improv choice. It was once again wasted when Recker swung at Wacha's first pitch and lofted a harmless fly to center, and Tejada struck out swinging to eschew a run-scoring opportunity in a quintessentially 2014 Mets fashion.

Niese still had a more than reasonable pitch count to begin the bottom of the sixth, and though he gave up a one-out double to Jhonny Peralta, he had every chance to make it a scoreless inning. First, he got Mark Ellis to line out to left. Then he induced a soft liner to second off the bat of Descalco. It should have gone for the final out of the inning, but Murphy inexplicably dropped it. Niese and the Mets paid for Murph's error when pinch hitter Kolten Wong singled to center to bring in Peralta with yet another two-out RBI.

Murph committed another gaffe when Wong attempted to steal second. Recker's throw to second appeared it would arrive in time to nail Wong, but Descalco danced off third base as Wong slid into second. This "game" distracted Murph and inspiring him to wing a throw to nail the runner at third. Thus the inning was prolonged, and thus was Bourjos able to score Descalco on an infield hit, and thus the Cards enjoyed a 5-1 lead that was cavernous when pitted against the useless Mets offense.

Fresh off his stomach-discomfort-shortened start on Sunday, Daisuke Matsuzaka took Niese's palce in the bottom of the seventh. He allowed a leadoff double to Holliday and saw him take third on a wild pitch, but a pair of strikeouts and a groundout kept him anchored there. Matsuzaka pitched the eighth as well and gave up a single to pinch hitter Matt Adams that Bobby Abreu misplayed into a two-base hit, then walked Bourjos, but struck out Jay to end the inning.

So Dice-K was able to put up a pair of zeroes, for all the good it did the Mets.Sam Freeman took over mound duties for the Cardinals in the top of the seventh and the Mets offered him no trouble, going down in order in both that inning and the eighth.

But lo, some signs of life detected! Jason Motte was handed a four-run lead in the top of the ninth and promptly allowed a leadoff homer to Duda, followed by a double from pinch hitter Eric Campbell. Within the span of four pitches, the Mets had given the Cardinals an honest to goodness save situation!

It was at this point that St. Louis sidearmer Pat Neshek entered the game to restore order. He induced a comebacker from Tejada, then watched pinch hitter Matt den Dekker and Eric Young swing at their first pitches and hit harmless pop ups. 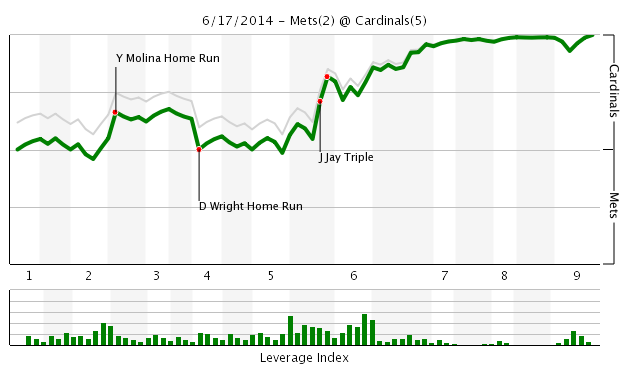