Mets vs Cardinals Recap: Bartolo Colon dominant on mound and at plate in 3-2 win

It was the Bartolo Colon Show today in St. Louis, as the big guy pitched eight great innings, hit a double, and scored a run.

Share All sharing options for: Mets vs Cardinals Recap: Bartolo Colon dominant on mound and at plate in 3-2 win

Bartolo Colon did some out-of-the-ordinary things today. Most notably, he hit a double, his first hit since 2005. He scored a run, his first since 2002. He executed two sacrifice bunts, something he has struggled with this season. And he notched more groundball outs than flyball outs during his eight strong innings pitched, a rarity for one of the most pronounced flyball pitchers in the league. Combine all of these feats and Colon was easily the most valuable Met in today's 3-2 win over the Cardinals. 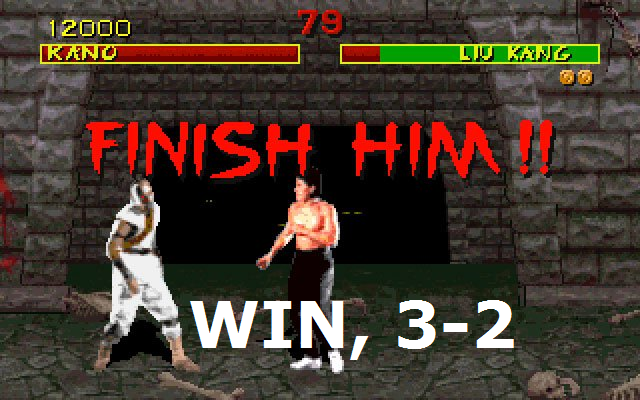 The day didn't start off great for Colon. Matt Carpenter sent his third pitch of the game over the right field fence to give the Cardinals a 1-0 lead. That would be the only run the Cardinals scored against the big guy, though, as he allowed just four more baserunners before departing after the eighth inning.

Colon didn't miss bats -- he struck out just one batter and generated only two swinging strikes out of 86 pitches -- but he pounded the strike zone and rolled double plays when he needed them. He threw a first-pitch strike 22 times in 27 chances, good for a 81% rate. Compare to the 60% league-average rate. The one time he allowed two baserunners in an inning he induced a groundball double play. It was a fine pitching performance, and yet it took a backseat to the glorious double he hit leading off the sixth inning.

With the Mets down 1-0, and the lineup struggling against Cardinals starter Lance Lynn, Colon gave his team a jolt. He doubled to left field, chugging to second base without needing to slide. Eric Young Jr. followed with a double of his own that scored Colon easily, depriving us of the wonder/terror of a Colon play at the plate and tying the game 1-1. Two batters later, David Wright drove Young home with a single, and the Mets had a 2-1 lead.

The Mets added an important insurance run when Young doubled home Wilmer Flores in the seventh inning. The way Colon was pitching, it seemed like a 3-1 lead would be enough. Leaving Colon in to pitch the ninth inning seemed like a no-brainer move, especially with Colon having thrown just 86 pitches in generally low-stress situations. Terry Collins disagreed, and removed Colon for pinch-hitter Bobby Abreu in the top of the ninth inning (Abreu flew out to end the frame). Jenrry Mejia started the ninth inning.

Mejia has been decent out of the 'pen this season, but he was shaky today. Carpenter led off the ninth with a double, and Mejia drilled the next batter, Jon Jay. Mets fans everywhere were justifiably cursing Terry Collins. However, Mejia got Matt Holliday to ground into a double play, and Mets fans cooled down a bit. Allen Craig then drove in a run with an infield single, cutting the Mets's lead to 3-2. Matt Adams stepped up to the plate with pinch runner Peter Bourjos on first and two outs.

Adams is atrocious against lefthanded pitchers, so Collins brought in in Dana Eveland. It was a curious move because Josh Edgin seemed like the better option. However, pulling Mejia for a southpaw was the correct decision. Eveland got Adams to ground out to end the game and the Mets avoided a sweep.

This was a much-needed win for the Mets, who had lost 11 of their previous 14 games. Collins is fortunate that this game didn't slip away, as he would've taken a beating for pulling Colon. Our heroes start a four-game series in Miami on Thursday at 7:10 pm ET. The pitching matchup in game one is Zack Wheeler vs Andrew Heaney. 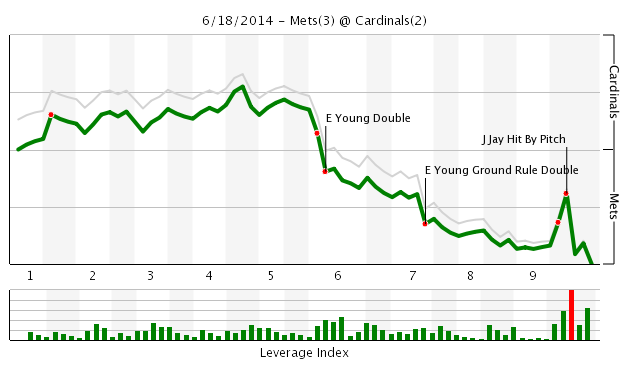