The brilliant backstop caught every pitch of the Mets' first two postseason runs.

Share All sharing options for: Top 50 Mets of All Time: #30 Jerry Grote

"Fuck Willie Mays! He's not the toughest guy in the world. The first pitch, we're going to throw right at his fucking head, knock his ass down and see if he can hit from there!'"

Jerry Grote had a way of getting his point across to a young pitcher, like on the above occasion, Bill Denehy's first outing against the Giants.

"Anytime I was pitching," Jon Matlack remembered of his Rookie-of-the-Year season, "anytime I bounced a ball and there was nobody on base, he would just about clean me off the mound throwing the ball back at me. He was extremely intimidating."

Jerry Koosman remembered the way Grote would "handcuff" a pitcher who wasn't doing what he wanted, intentionally whipping the ball at his belt buckle. "I told him, 'if you throw the ball back at me like that one more time I am going to break your fucking neck," recalled Koos. "We had great respect for each other after that."

According to Ron Swoboda, Grote's teammates could "barely stand him. He was a red-ass Texan who loved to fuck with people but who didn't like anyone to fuck with him. It was a one-way street. Grote is Grote."

Then he added: "And we would not have been as good without him behind home plate." 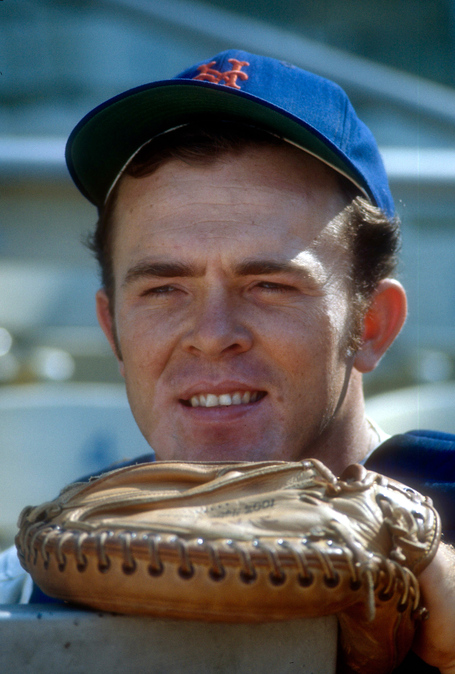 Gerald Wayne Grote (slant rhymes with groady) was born in San Antonio, Texas, a few months after the Battle of Midway. Sticking to the Pacific Theater, he attended Douglas MacArthur high school in San Antonio, where he caught, pitched, played third base, ran track, and won a title in cross country.

The brand new Houston Colt .45s offered Grote a contract out of high school, and he turned them down. Instead, he enrolled at nearby Trinity University and apprenticed in the catching mysteries under former Detroit Tigers manager Del Baker. Baker had backstopped in the majors in the nineteen-teens.

In 1962, Grote signed with Houston after all and was sent to the San Antonio Missions of the Texas League. By the end of the year, at twenty years old, he was a major leaguer.

Joe Torre once observed that Johnny Bench is a "hitter who catches," whereas Grote is a "catcher who hits." In his early years, he didn’t hit much. Grote put up a line of .182/.241/.261 in 103 games with the newly christened Astros. He worked hard, though, in a chicken-wire batting cage he built on his parent's farm.

Grote looked promising behind the plate, throwing out seven of his first eight attempted basestealers. But he couldn’t keep his spot in the lineup, and sunk back to the minors for all of 1965.

Grote’s break came that fall when, in a trade for pitchers Tom Parsons and Gary Kroll, he joined a Mets team that had churned through fourteen catchers in its first four years of existence. The Mets were about due for a backstop to stick, and they welcomed a glove-first candidate.

"He didn't knock down the fences," remembered front-office man Bing Divine. "But he could really catch and handle a pitcher, call a game and throw. I don't think anyone else had a big opinion of him." 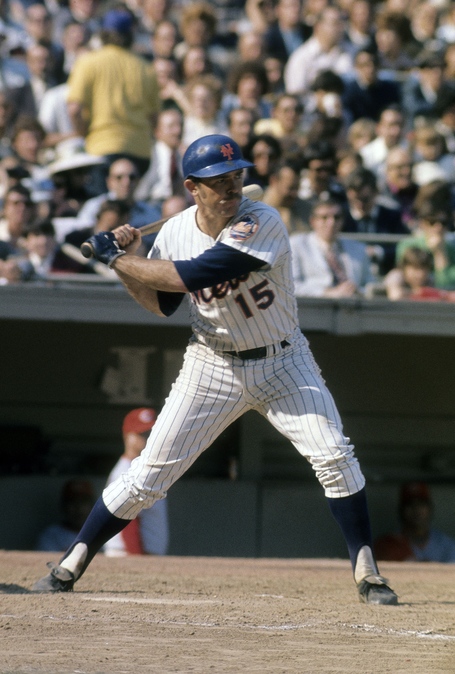 Grote started 101 games for Wes Westrum's 1966 Mets, slugging 12 points below his on-base percentage of .327, but looking like a gold-glove caliber defenseman. "He was about the finest young receiver I have ever seen," remembered Westrum. Otherwise the skipper was no fan of Grote’s.

Put yourself in Westrum’s shoes on a July night at Dodger Stadium, 1967. Your talented young catcher is on route to a season OPS+ of 38, but he’s your talented young catcher, so you’re playing him. In the course of the game, you use both your backup catchers off the bench, then watch in alarm as Grote barks at the ump over balls and strikes. You’ve warned him about this. You’ve warned him to quit yelling at his own pitchers, too. Then, after the 7th inning, Grote carries his pissyness into the dugout and tosses a towel onto the field. This earns him an instant ejection and outfielder Tommy Reynolds the right to strap on knee pads in what turns out to be a 11 inning loss. That was Grote.

The Texan caught his second break in the fall of 1967, with the hiring of Gil Hodges as manager. "Gil changed me completely as a hitter," Grote recalled. "Gil got me up on the bat and told me all I had to do was make contact, keep the ball in play, use the whole field."

Grote excelled behind the plate, throwing out 44 percent of attempted basestealers in his first three seasons. He went all of 1968 – over a thousand innings – with just one passed ball. The unexpected part was that his bat caught up. In Gil’s first year, Grote led the team with a .357 on-base percentage, earning a spot on the all-star team, where he started ahead of Johnny Bench.

Heading into the miracle season, 1969, "only Grote seemed to know." So remembered Tom Seaver, who recalled Grote saying "repeatedly that we could win, we were good enough to compete with anybody, we had the best team in the league. I thought we could be a .500 team." Of course, Grote was well positioned, having helped shape the young arms that were about to blast apart the league.

It’s famously hard to know how to credit a catcher for good pitching, but take a look at some key choices made by the championship-era Mets. Westrum, a catcher, was succeeded as manager by Gil Hodges, who had caught in the minor leagues. Hodges’s coaches were Yogi Berra, Rube Walker, and Joe Pignatano, three catchers. When Gil died, the greatest of those catchers took his place. What should we conclude that this historically pitching-rich team felt about catching? And they stuck fast with Grote.

"He’s the best catcher a pitcher would want to throw to," said Seaver. Matlack remembered: "He would come out to the mound, and you might have first and second and one out, and whoever you were facing, he’d relay to you exactly what had happened the previous at-bats, pitch by pitch by pitch, exactly where the guy hit the ball…"

As for his opponents, Bench said that he’d gladly play third base if ever he shared a lineup with Grote. Steals king Lou Brock called him the hardest man to run on in baseball.

Grote put up a .991 fielding percentage in 1969 and swatted a career best six home runs and 40 RBI. He went 2-4 with a double the day the Mets clinched their first miraculous playoff appearance. In the postseason he caught every pitch, as he would catch every postseason pitch in ’73, and thus every Mets postseason pitch from 1962 until October 8, 1986. The Mets became World Champions with four consecutive wins in which opponents scored a total of five runs. 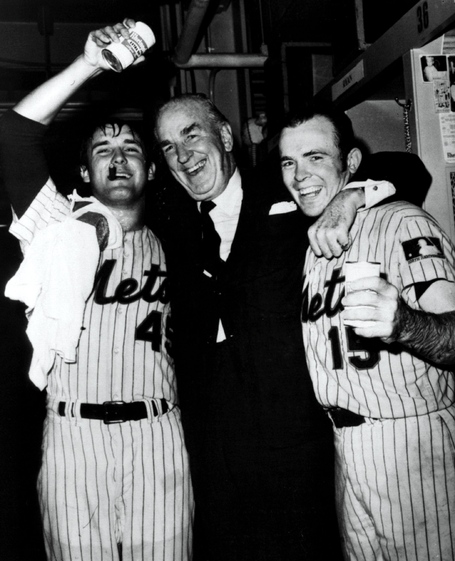 The next two seasons, Grote caught 125 and 126 games. With Grote behind the plate in 1971, opponents hit .227 and scored just 400 runs in 122 games, earning the brilliant receiver a cover photo on Sports Illustrated. But the team’s hot start was squandered by late summer. In the spring, Hodges died, and something seemed to have come to an end.

A banged-up Grote lost starts to Duff Dyer in 1972, then went in for elbow surgery in September. In May of 1973, Pittsburgh’s Ramon Hernandez threw a pitch that broke his right forearm. Upon returning to action, he immediately fractured his pinkie on a foul tip. Grote’s .256/.290/.316 slashline was nothing to be afeared, but he was healthy for the sparkling stretch run wherein the Mets won nine of 11 to edge out the Cardinals. In the clinching game, Grote smacked a two-run single that put the Mets up 3-zip.

The Mets posted a 1.33 ERA against the Reds to win the League Series, which included Grote handling a 12-inning Game Four.  In the World Series, Grote went 8-for-30 as the Mets lost in seven games – including extra inning Games Two and Three – to the defending champion Oakland A’s. As the team entered its long period of darkness, Grote was the one player to have appeared in all 188 innings of postseason light.

For the second time in his career, Jerry Grote was an all-star in 1974. This time, Johnny Bench didn't back him up; he backed up Bench. Grote appeared in only 97 games due to injuries that year, but did find an opportunity to put his red ass on display.

It was a home game against the Cubs, and the Daily News had just run an article detailing the Mets’ curious suspicion that umpires were stealing baseballs and walking them home. Umpire Bruce Froemming sent a snarky note to the Mets clubhouse before the game, and Grote responded, it appears, by letting an eighth inning pitch zip past his glove and nail the official. "It was a bush league stunt," Froemming said, "strictly out of class D."

The Mets invited six different catchers to training camp in 1975. Grote responded by having his best year in some time, batting .296/.357/.373 and leading the league with a .995 fielding percentage. Things were working on both sides of his game: Seaver won his third Cy Young award; Grote was the fourth hardest man in the league to strike out. The only shame of it was that the Mets finished in third place. They would grow used to that.

By the end of 1976, another fine offensive year, Grote’s back problems had become chronic. He played only four games that September. The following spring it was 25-year-old John Stearns’s turn to be the Mets principal catcher. "I am here," Grote conceded, "to help him and fill in for him on the days he needs a rest."

Stearns put up a 112 OPS+ in 139 games and made the All-Star Game. Grote appeared in just 42 contests, including 11 starts at third base, before being shipped off as part of team dismantling that began in earnest with the "Midnight Massacre." Neither minor leaguer that the Dodgers swapped for Grote ever made it to the big leagues.

Grote would never again play more than a couple dozen games in a season, though luck or fate placed him in two more World Series, 1977 and 1978, both Dodger losses to the Yankees. In 1981 he "retired to be with my wife and kids." It backfired: "Last November, she filed for divorce, so I decided to get it back together again." That meant a contract with the Kansas City Royals, where he would have one 7-RBI night and hit .304 before being cut after 22 games. The Dodgers brought him back for just a pair of September contests and that was the end.

On his website, Grote expresses thanks to have played in a city "where baseball was as big as King Kong and the Boys of Summer were more popular in Brooklyn than the Beach Boys at a California rock concert." He played 1234 games as a Met, It was a script to compare with Robert Redford’s The Natural and it didn’t take Hollywood effects to light up Shea Stadium."

That was true, and it didn't take much to light up Grote either, whose red ass could be spotted from Laguardia-bound jets. 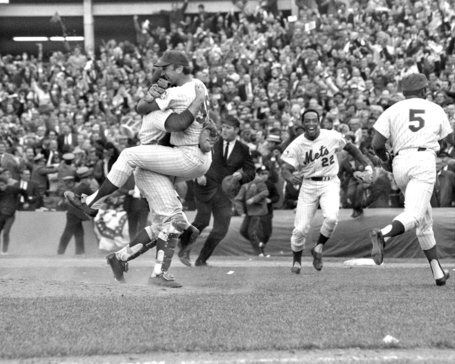