Mets vs. Marlins Recap: Mets send Marlins under the sea with blowout victory

The Mets won a laugher in Miami on Sunday afternoon to take three or four games from the division rival Marlins.

Share All sharing options for: Mets vs. Marlins Recap: Mets send Marlins under the sea with blowout victory

After taking two of the first three games they played in Miami, the Mets took the opportunity to win the four-game series on Sunday afternoon and ran with it. The team has had its share of wild losses when visiting the Marlins over the years, which makes a blowout victory feel that much better. 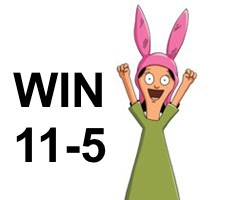 The Mets didn’t score in the first inning of the game, but they scored plenty after that. In the second, Lucas Duda led off with a single, and although he got a bad read on Kirk Nieuwenhuis’s ensuing double and did not score, the Mets did not squander the inning. Ruben Tejada drew a walk to load the bases, and Anthony Recker hit a long sacrifice fly—long enough that Marcell Ozuna couldn’t throw out Duda at home plate—to get the Mets on the board. That play advanced Nieuwenhuis to third base, too, which wound up mattering quite a bit.

For the first time in a long time, the Mets used the suicide squeeze with Jon Niese—hitting eighth in the lineup today—at the plate. Niese dropped down a perfect bunt, and Nieuwenhuis scored easily as the Marlins had no choice but to get the out at first base. Eric Young Jr. then flied out to end the inning, but the Mets had gotten a pair of runs after loading the bases with the bottom of the order due up.

After Niese threw a scoreless second, the Mets got right back to it in the third. Curtis Granderson singles and moved to third on Daniel Murphy’s single. David Wright hit a sacrifice fly to plate Granderson, and after an out by Duda, Nieuwenhuis hit a long double to score Murphy. The Mets were up 4-0.

Niese kept the Marlins off the board in the bottom of the third, and the Mets added three more runs in the top of the fourth. With two outs and just Jon Niese standing on second base, Granderson drew a walk, and Murphy hit a three-run home. Even in Miami, the seven-run lead felt pretty safe.

Of course, there had to be a little bit of stress before the Mets could win the game. Neither team scored or did much else at the plate through the top of the sixth, but the Mets and Niese got into quite a jam in the bottom of that inning.

What should have been a leadoff out off the bat of Jeff Mathis turned into a double over Curtis Granderson’s head in right field. After a sac bunt moved Mathis to third, Reed Johnson doubled to get the Marlins on the board. Niese retired Ed Lucas for the second out of the inning, but that’s when things got shaky. Giancarlo Stanton singled in a run, and Niese walked Casey McGehee before Marcell Ozuna singled to cut the Mets’ lead to 7-3. And Niese walked Jeff Baker to load the bases, but he stayed in the game and struck out Derek Dietrich to end the inning—and his start—with the team’s lead firmly intact.

The Mets prevented the possibility of another such situation by scoring four more runs in the seventh. With runners on the corners and one out, Ruben Tejada singled in a run. Anthony Recker doubled to score another. After Eric Campbell struck out pinch hitting for Niese, Eric Young Jr. singled to bring home the Mets’ tenth and eleventh runs of the day. That pretty much wrapped up the win.

Carlos Torres pitched two scoreless innings to get the game to the ninth, and although Gonzalez Germen had a rough outing and gave up two runs, the game wasn’t nearly close enough to warrant panic.

The Mets are off tomorrow, but they begin a two-game mini-series with the Oakland Athletics at home on Tuesday night. Bartolo Colon takes the hill for the Mets, while former Mets prospect Scott Kazmir gets the nod for the A’s. 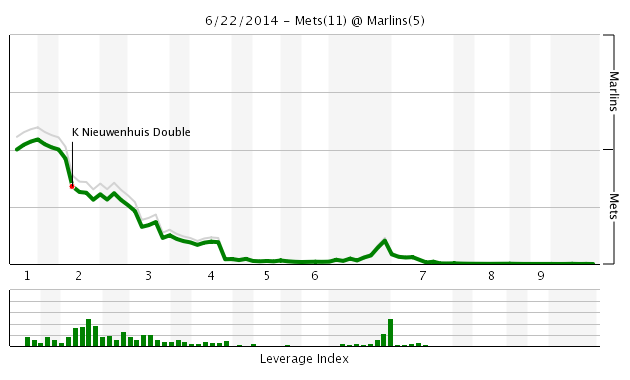