With rumors of his imminent release in the air, Chris Young went deep twice as the Mets piled on Scott Kazmir and A's in a 10-1 drubbing.

Share All sharing options for: Mets vs. A's Recap: Kazmir no match for Young's physical graffiti

Perhaps you've heard this story before. Back in 2004, Scott Kazmir was a Mets prospect, and one of the most highly regarded pitching prospects in the game. Then he was sent to Tampa Bay for starter Victor Zambrano and reliever Bartolome Fortunato by then-GM Jim Duquette. There have been worse trades in baseball history—worse trades in Mets history, even—but this one was rued almost immediately and had disastrous effects for the Mets in the seasons that followed. It was so bad a trade that people with fuzzy memories tend to assign it to either Duquette's predecessor (Steve Phillips) or his successor (Omar Minaya). This is unfair but understandable.

Kazmir went on to enjoy some great seasons for the Rays, slump and look all but finished for the Angels, revive his career with the Indians, and thrive with the A's. He came into tonight's game the AL leader in ERA (2.05), having allowed more than three runs in only one of his starts and given up only 75 hits in 90 innings. He is one of the biggest reasons why the A's own the best record in baseball.

It would be nice for the Mets to put up a respectable showing against Kazmir, if only to stave off the Hot Sprots Takes that inevitably follow any reminder of What Could Have Been. Like death and taxes, LOLMETS will always be with us, but that's no reason for the team to contribute to its own mockery.

Tonight, the Mets decided to not to add to this pile. They piled on the opposition instead. 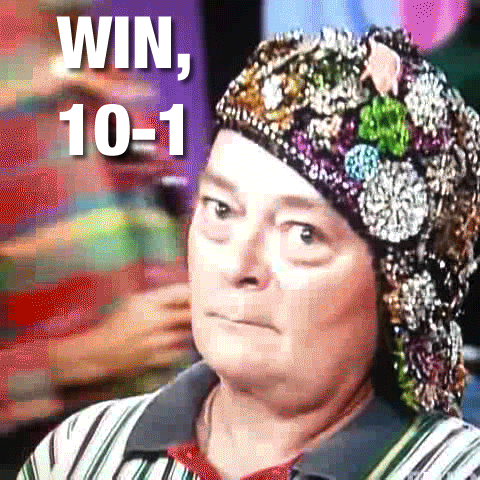 The A's worked some two-out magic against Bartolo Colon in the top of the first, beginning when Brandon Moss swung 3-0 and dunked a single into very shallow left field. Yoenis Cespedes (whose last appearance at Citi Field resulted in some titanic home runs) followed by belting a double over Chris Young's head in center, scoring Moss.

This would turn out to be a mere blip on his radar, however, as Colon would experience virtually no interference from A's hitters the rest of the way. He started the trend with a much better second inning, walking a batter but escaping unscathed, thanks in large part to a diving play by Eric Campbell at first that turned a hit into a force out.

The Mets did not exactly look like an offensive juggernaut when the evening began. Eric Young singled to start the bottom of the first, but a Daniel Murphy K and a foul out by David Wright were followed by Young getting himself picked off first. Soon, this embarrassment would be a distant memory.

The fireworks began when Campbell led off the second by dropping a double into the right field corner. Curtis Granderson then turned on a Kazmir fastball and belted it into the Mo's Zone for a two-run homer. The next batter, Chris Young, exacted some revenge on his former team (and made a bid to keep his job) by blasting a Kazmir changeup into the left field seats. You will probably not be surprised to learn this was the first time this season the Mets hit back-to-back homers.

After Colon retired the A's in order in the top of the third—the last out coming on a catch by Eric Young in left that was a little more acrobatic than it needed be—the Mets immediately got back to business in the bottom half. Murphy singled up the middle to start the inning, followed by Wright lofting a double down the right field line. After an unproductive groundout to the left side from Campbell, Granderson had the good sense to hit his grounder to first, allowing Murphy to score on the play.

Kazmir looked wary of pitching to Chris Young, who homered off of him in the second and has hit well against him in his career. So he issued a unintentional-intentional walk to face the recently recalled Travis d'Arnaud instead. That proved a mistake for Oakland, as d'Arnaud took him deep for a three-run bomb. It was a hopeful sign that what happened to the catcher in Vegas won't stay in Vegas. Though Kazmir would record the last out of the inning, d'Arnaud's homer essentially ended his inning. In hanging seven runs on his ledger in only three innings, the Mets gave Kazmir his ugliest line of the year by far.

With a healthy six-run cushion to lean on, Colon allowed a leadoff single to Cespedes in the top of the fourth but nothing else, then worked around a two-out single in the fifth while fanning two batters. In between, he collected a hit for his second start in a row, providing another burnt offering for the altars of the gif gods.

In the sixth, Colon retired the A's 1-2-3, as one play in that frame symbolized Oakland's offensive futility. Steven Vogt hit what looked like a screaming line drive down the first base line, but the ball hit umpire "Country" Joe West. The ump barely flinched while declaring the ball foul, then flexed his muscles for comic effect. A flustered Vogt went down swinging.

Meanwhile, the Mets' batters set about cushioning their starter even further. In the bottom of the fifth, Chris Young made a further argument to extend his employment by going deep again, taking A's reliever Jim Johnson deep to almost the same spot as his first homer.

The runs kept coming in the sixth. Ruben Tejada led off the inning by getting hit by a pitch from Oakland's latest hurler, Jeff Francis, moved to second on a Colon grounder, proceeded to third on an Eric Young single, and scored on a bloop hit by Murphy. A bad relay on Murphy's bloop permitted Young to move to third and score on a subsequent Wright grounder, making the score a robust 10-1.

Once New York hit double digits, Colon began to pitch like he was just getting warmed up. He set down the A's in order and struck out two batters in each of the seventh and eighth innings. He finished with eight strikeouts, with five of those coming against the last seven batters he faced. Even accounting for a Give Up factor on the part of the visitors, it was an impressive performance. Vic Black pitched a blank ninth to round things out and cap the victory.

I wouldn't count on offense like this to continue, but pitching like Colon's doesn't need 10 runs every game. Would three or four a game be too much to hope for? 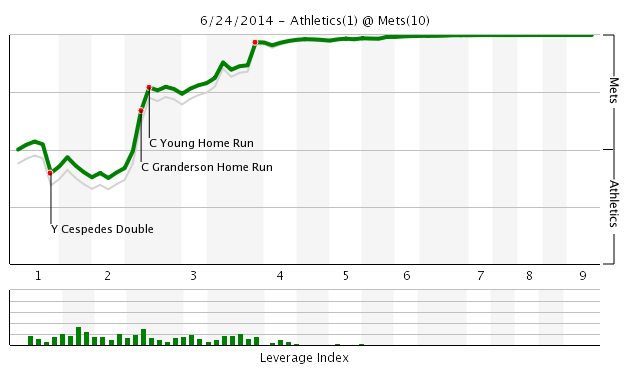