Mets vs Pirates Recap: Pitching shines, but offense unable to cash in for deGrom

Jacob deGrom had a solid start and Jenrry Mejia bailed them out twice, but the Mets couldn't put more than two runs on the board.

Share All sharing options for: Mets vs Pirates Recap: Pitching shines, but offense unable to cash in for deGrom

It was another solid start tonight for Jacob deGrom, and in what seems to be a disturbing trend, deGrom got little help en route to a no-decision. No, deGrom was not flawless by any stretch of the imagination. The young Mets starter allowed eight baserunners, but was generally efficient having posted only 90 pitches over 6.2 innings. 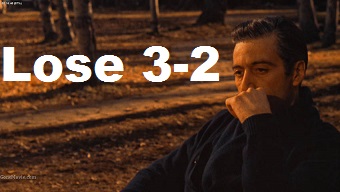 The Mets offense looked dead early on, as they managed only one hit in the first three innings. Fortunately, the top of the lineup provided a spark in the fourth, as Ruben Tejada singled and Daniel Murphy doubled, which set up a Lucas Duda two-RBI single to right field. The rally was killed quickly by Chris Young, however, as he hit into a fielder's choice and then promptly got himself picked off when he was caught leaning off first. The Pirates responded quickly in the bottom of the frame, as they had runners on first and third with one out after two singles, which were cashed in on a Jordy Mercer single. The whole situation was set up by a botched play, where it appeared Jacob deGrom failed to cover first base, which kept the inning alive.  This would consist of all of the offense that either team would provide for the rest of regulation.

The Mets again found themselves in a spot of trouble in the seventh as Pedro Alvarez singled, and was bunted over by Jordy Mercer. deGrom was able to strike Josh Harrison out, but with the left-handed Gregory Polanco coming up, Terry Collins elected to go to Josh Edgin, who got Polanco to fly out. Curtis Granderson was then robbed of an extra-base hit in the top of the eighth, and on to the ninth we went still squared at 2.

The Mets managed to create an opportunity for themselves in the ninth, as Eric Campbell singled, Juan Lagares hit into a fielder's choice to get himself on base, and then - in one of the flukiest plays of the season- Travis d'Arnaud singled when the ball ricocheted off of Mark Melancon's leg and into right field. Bobby Abreu, however, couldn't bring Lagares from third base. In the bottom of the inning, Jenrry Mejia struck out two and got a line-out after giving up a single, and we went to extra innings.

The tenth inning may have been one of the most frustrating moments of the season, as it started off by Daniel Murphy getting caught stealing in the top of the inning to make the third out. It was the bottom of the inning, however, that drew the ire of Mets fans as Josh Harrison singled and proceeded to steal second base. Ruben Tejada -assured that he had made the tag on time - called for a challenge and Terry Collins obliged. The call was upheld, and the Mets now had to fend off the winning run. Gregory Polanco then hit a ground ball, which Jenrry Mejia sent to Ruben Tejada who failed to tag Josh Harrison. Harrison got himself into a rundown, but got to third safely despite the fact it appeared he was clearly out of the basepath on two separate occasions. Terry Collins took exception and let the umpires know his feelings, but it proved to be moot as Mejia - after walking the bases loaded - struck out two and got a fly ball to send it to the eleventh.

After the Mets went down quietly in the top of the eleventh, Vic Black walked Clint Barmes, whose patience was rewarded with a walk-off RBI double by Josh Harrison. This loss knocks the Mets record down to 36-44, and sends them back to the basement of the NL East, at 5.5 games out of first. 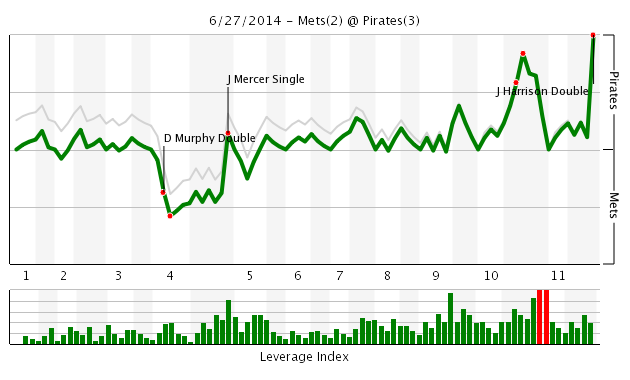