With the 10th pick in the 2014 Amateur Draft, the Mets can potentially draft Eric Fedde. Who is Fedde and would he be worth selecting? 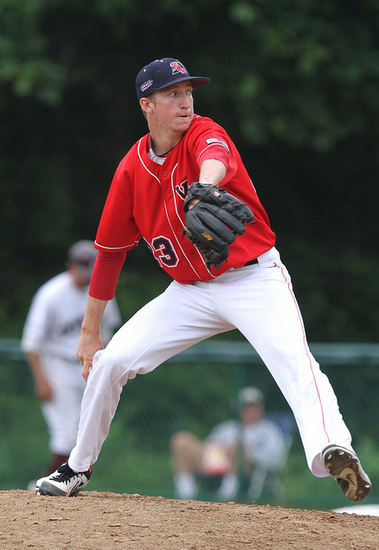 An outfielder and a shortstop for the Las Vegas High School Wildcats, Eric Fedde helped lead his team to two division championships, compiling a 73-30 record over the three seasons he played for them. Named an all-state, all-region player, the San Diego Padres saw his potential and drafted him in the 24th round of the 2011 Major League Baseball First-Year Player Draft, the 743rd player overall. He declined to play with them, opting to go to college. After graduation, he attended the University of Las Vegas, where he took a major in communication studies and was given a roster spot on the baseball team.

His rookie season went well. Making fifteen starts, he led the team in innings pitched, strikeouts, and wins. His sophomore season was very much the same. His 83 strikeouts that year were the most on the UNLV Rebels baseball team, and they ranked fourth overall in the entire Mountain West division. Both years, he received various honors and was named to various honorary teams. In the summer of 2013, he went east to play in the Cap Cod summer league. He excelled there, and that excellence continued as he left the league to play for the USA Baseball National Collegiate Team and returned to Nevada.

Entering his third year of UNLV baseball, Fedde was being watched by scouts and was on the watch list of many. Baseball America ranked him as the 12th-best pitching prospect and the 17th-best overall prospect available in the 2014 MLB Draft. Perfect Game USA tabbed the young right-hander as their Preseason Pitcher of the Year for the Mountain West division, and his name was put on the watch list for the 2014 Golden Spikes Award. Fedde was primed to have a good season, and he came out of the gates blazing.

Through eleven starts, Fedde was throwing the ball as well as he ever had. His 1.76 ERA was more than half of what it had been in his sophomore and freshman years through almost as many games and innings pitched. While his walk rate was roughly the same, his strikeout rate ballooned. In his first two years, he struck out 6.6 and 7.8 batters per nine, respectively. In his junior year, under the microscope with scouts watching his every move, the young right-hander struck out 9.6 batters per nine, a significant increase.

His season unfortunately came to a quick and sudden end when it was announced that he would need Tommy John surgery. Not long after it was revealed that East Carolina pitcher Jeff Hoffman was going to undergo Tommy John surgery, Fedde missed a start because of elbow discomfort. An MRI revealed a torn UCL, and in mid-May, he was shut down for the year to undergo the procedure. It certainly was a huge blow for the pitcher, who was being projected to be selected somewhere in the middle of the first round of the draft.

Fedde throws with a nice, easy motion, from a three-quarters angle. He repeats his delivery well, though he has a habit of dropping his arm in later innings because of fatigue, hurting his control and flattening his pitches out. He adds a bit of deception to his delivery by dropping his glove down as he starts his windup, and then lifting it back up, changing the plane of where the ball is and moving the batters eye around before the ball is pitched.

Fedde is a very tall, lanky kid, standing 6'3" but weighing only 165 pounds. It stands to reason that he will fill out a little more in the coming years, adding a little more velocity to his heater. As it is, the fastball generally sits in the low-to-mid 90s, maxing out at around 97 miles per hour. His best secondary offering is a solid slider that flashes plus potential. He has a good feel for the pitch, able to throw it anywhere in the count and for strikes, or outside the zone to set up his pitch sequence. In addition, he throws a changeup, but the pitch is a work in progress.

Obviously, his Tommy John surgery complicates things. The surgery has a high rate of success, so it's doubtful that Fedde never recovers, but the kind of pitcher he will be and how effective he will be once he returns is up in the air.

One of my favorites in the class, Fedde's stock obviously took a big hit when it was revealed that he'd require Tommy John surgery. At his best, Fedde was throwing in the low-to-mid-90s with an excellent slider that has some tremendous depth. What has especially impressed me about Fedde is how well he had commanded the breaking ball before the injury, showing drastic improvement from a year ago. With a tall, lanky frame, it was even possible to imagine Fedde finding some more velocity despite being a college pitcher, a luxury considering he had enough present velocity as it was.

While he didn't have the cleanest delivery—he can be late in turning the ball over, adding stress to his shoulder—it was mostly clean and offered some deception due to the way he'd drop his hands before bringing them back up before separation. Tommy John surgery has a high rate of recovery, so Fedde should still go before round two, though if the Mets need to choose between two college pitchers recovering from Tommy John surgery, Jeff Hoffman is the clear choice.