With the 10th pick in the 2014 MLB Draft, the Mets can potentially draft Kyle Freeland. Who is Freeland, and would he be worth selecting? 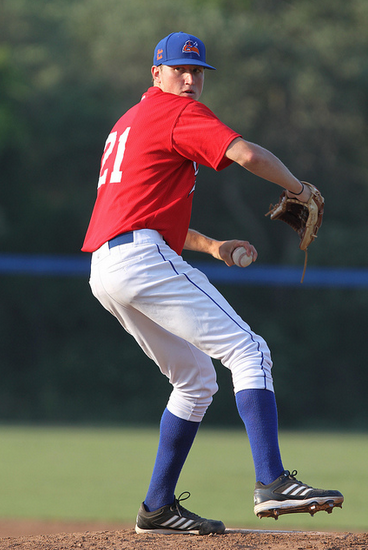 Kyle Freeland was good at baseball while playing at Thomas Jefferson High School in Denver, Colorado, earning All-State and All-District honors in his junior and senior years. Things might be very different for the young left-hander, though, if he pursued the sport he was more accomplished in: golf.

Freeland went 8-2 in his senior year, posting a 1.39 ERA in 65 innings, finishing his high school baseball career with a 1.96 ERA and 208 strikeouts. In addition, he had a cumulative .477 batting average. The Philadelphia Phillies selected Kyle with their 35th round draft pick (1,081st overall) in the 2011 MLB Draft. He rejected their offer and opted to attend the University of Evansville.

All in all, Freeland had an unimpressive season in 2012. He made the team as a freshman and actually led Purple Aces pitchers in strikeouts with 70, but that says more about the state of the team than how good he was. He was named MVC Pitcher of the Week (5/12/12) and won All-Missouri Valley Conference Honorable Mentions at the end of the season, but other than those two awards, Freeland didn't do anything particularly noteworthy on the field.

His sophomore season was very similar, though there were signs that he was improving. He allowed 107 hits and batters hit .296 off of him, but most of the contact they made was limited to singles. Freeland allowed only 16 extra-base hits over the course of the entire season. He allowed fewer than four earned runs in a game over the course of his first eight starts before petering off as the year went on.

That summer, Freeland went to play in the Cape Cod League, pitching for the Hyannis Harbor Hawks. He changed the course of his life there. The fairly unimpressive southpaw from a fairly unimpressive baseball school—the school's baseball alumni list is limited to Andy Benes, Sal Fasano, Jamey Carroll, and Rob Mauer—dominated the elite summer league, posting the 7th-best ERA total, striking out a league-leading 48 batters and walking a league-best four batters.

Before the 2014 season, scouts knew of Freeland, but he wasn't as highly touted as he is now, and was only moderately being scouted. After his performance in the Cape Cod League, they had their eyes opened. As his junior season progressed, what could've been written off as a fluke looked more and more like the real deal. The southpaw shot up the draft boards on the strength of what scouts saw on the field, and the numbers appearing on his stat line.

While his sterling 1.90 ERA was very nice, the most notable thing about his 2014 junior year is the fact that he began striking batters out at an incredible rate, while keeping walks all but nonexistent. In 14 games and 99.2 innings, he struck out 128 batters while walking only 12, good for a 10.7 strikeout-to-walk ratio. Here's how that compares to some familiar major league pitcher when they were in college.

So what changed? Freeland had generally unimpressive numbers as a freshman and sophomore, so why was he suddenly striking out the world while walking no one?

Most notably, Freeland added velocity to his fastball. As a freshman, his fastball generally clocked in in the mid-to-high 80s. Beginning in his second year, he began adding muscle mass and began using his tall frame more effectively, culminating in the splash that he made in the Cape Cod League and in college this year. That mid-to-high 80s fastball was now sitting in the low-to-mid 90s. At 170 pounds, Freeland could continue filling out, giving him further stamina and possibly even additional life on his fastball. Add to the mix a sharp breaking slider, a solid if unspectacular changeup, and a still developing curveball, and Kyle Freeland has all the ingredients of being a first-round draft pick who can become a legitimate MLB starter.

Freeland is a strike thrower, going right after batters. His fastball doesn't completely overpower batters, clocking in the low-to-mid 90s, but his control is impeccable and the southpaw is able to use different grips to produce different results. His two-seam fastball produces a lot of sink and has plus movement, and he can cut the ball. He is able to maintain his fastball speed late in games, and he doesn't lose his control as he tires.

His slider is his best secondary offering, and he uses it as his primary strikeout pitch. Reminiscent of Matt Harvey, it has very sharp break, and is thrown at a relatively high velocity, sitting in the mid-to-high 80s. He has good control of it, throwing it effectively against both lefties and righties. His changeup clocks in in the mid-80s and does not have enough of a speed differential as compared to his fastball. Like his curveball, it is just a set-up pitch more than a legitimate weapon, but both can become regular go-to pitches with some work, especially the changeup.

Some scouts have questions about his frame, which is still somewhat slight, and are concerned that his delivery could cause injury problems, but the left-hander has not yet suffered any negative effects yet. Specifically regarding his delivery and injuries, they worry about him overthrowing, and because of his whipping three-quarters arm angle, using his arms to pitch more than his trunk, putting undue stress on the limb.

In addition to his baseball skill, Freeland is a professional. Every offseason, he threw himself wholesale into the training regimens and conditioning sessions that his coaches prescribed and gave them his all. The dividends have obviously paid off, but had he not been too headstrong or convinced in his own ability, Freeland might not be in the position he now finds himself in. Wise beyond his years, Freeland even changed his own appearance to further reflect his maturity.

"My senior year in high school, freshman and sophomore years at school I had [a mullet]", he told Baseball America. "Then after my sophomore year I need to be professional for my draft year and be a grown-up. It is business time, not play time anymore."

Freeland is a testament to the belief in projection. Sometimes it feels like that every pitcher you think will add velocity as he fills out his frame doesn't, but then a pitcher like Freeland will come along who actually fulfills his projection. As a freshman he was throwing in the mid-80s. Now he'll sit 90-93 and will touch 96. That's still not an outstanding fastball, but his command is strong enough that it plays up, and he'll pair it with a good slider and changeup combo. What intrigues me the most about that slider is that he uses it against righties like another pitcher will use a cutter, making it surprisingly effective regardless of which side of the plate his opponent stands on. He's a little slight of frame, which worries me, but his delivery is super loose and easy with lots of arm speed. And again, that command has been quite good, and I see a couple of improvements that he can make mechanically if he ever loses it. Some scouts worry that his frame, reliance on his slider, and lack of track record point to a future reliever, but I think he's a future number three starter and could be a fast-riser.

"He makes my job easy on Friday nights. His ability to pound the zone makes his strikeout-walk ratio a sabermetric's dream. ,,, He's the most electric arm we've had here since Andy Benes in 1988."

"I don't see a glaring negative...It wasn't even so much the performance, but the stuff. There were probably 20 scouts there, some scouting directors, and all of them I talked to were really impressed."