The Cubs had the worst record in the game before they started the series with the Mets.

Share All sharing options for: Mets vs. Cubs Recap: deGrom shaky, comeback comes up short as Mets are swept

If there’s one way to kill the buzz of beating the Phillies four out of five times, it’s getting swept by one of the worst teams in baseball. The Mets managed that feat with a third loss in as many nights at Wrigley Field on Thursday evening. 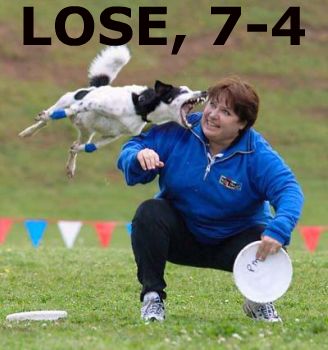 Jacob deGrom wasn’t very good in his fifth major league start. In total, he gave up four runs in five innings, threw 90 pitches, walked three, and struck out three. With the game scoreless through one-and-a-half, deGrom gave up three of those runs in the bottom of the second inning.

Luis Valbuena doubled, and deGrom walked Nate Schierholtz. Darwin Barney then hit a ground ball that was very nearly a double play, but the Mets were only able to get a force out at second base. Barney might have been out at first base, but the Mets opted not to challenge the play. Based on the replays shown on the SNY broadcast, which didn’t clearly show the runner was out at first, it’s understandable that the team didn’t challenge the play.

So with one out, Eli Whiteside hit a fly ball to left field, and Luis Valbuena tagged up from third base. Andrew Brown made a very good throw to home plate, where the umpire called Valbuena out. That would have ended the inning, but the Cubs challenged the call and won—Valbuena had gotten his hand on the plate before Travis d’Arnaud tagged him. And Travis Wood, the Cubs’ starting pitcher with a very good track record as a hitter, hit a two-run home run to put Chicago up 3-0.

The Mets loaded the bases with two outs in the fourth, but Travis d’Arnaud flew out to end the inning. The Cubs tacked on a run in the bottom of that frame on a ground out by Wood.

Despite drawing a couple of one-out walks in the fifth, the Mets were again unable to score. In the sixth, though, Ruben Tejada got the team on the scoreboard with a single that plated Andrew Brown. Later in the inning, Chris Young blooped a single to score Wilmer Flores with two outs. But that was it for the inning, as Curtis Granderson popped out with runners on the corners to end it.

Vic Black took over for deGrom in the sixth and threw a scoreless frame before Andrew Brown hit a game-tying home run in the top of the seventh. Sent back out for the bottom of the inning, Black gave up a go-ahead—and eventual game-winning—run on an Anthony Rizzo bomb.

Down by one in the eighth, the Mets went from two outs, nobody on to runners on the corners for David Wright, but Wright grounded out weakly to third base to end the inning. Wright’s season thus far brings back unpleasant memories of his 2011 campaign, which is pretty disappointing given how great he was over the past two years. And when Terry Collins turned to Jenrry Mejia to pitch the bottom of the eighth, Wright was double-switched out of the game—a move that doesn’t make much sense but probably never happens if Wright isn’t struggling.

Mejia struck out the first batter he faced, gave up a double, and got a pop out. Terry Collins had him intentionally walk Emilio Bonifacio, who has just a .293 wOBA on the year, to pitch to Junior Lake, who promptly tripled to make it 7-4 Cubs. Lake was actually thrown out at home plate after trying to score as the Mets botched their throw to third base on his triple, but it didn’t much matter. Pedro Strop set the Mets down in order in the top of the ninth to finish off the sweep. 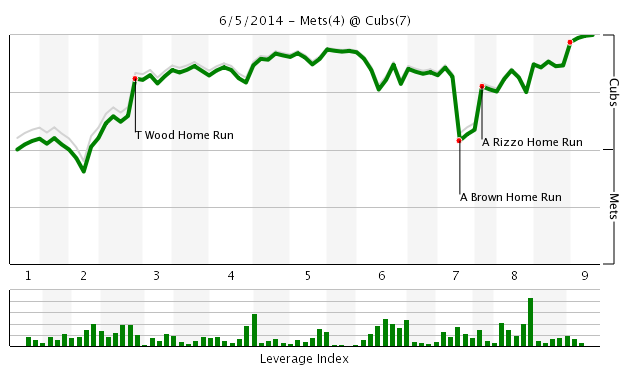