The Mets snapped an eight-game losing streak by winning the final Subway Series game in the Bronx, but a cloud still hung over them. Just before the end of that losing skid, three coaches had been fired, with the clear subtext that Bobby Valentine's job hung by a thread. This inspired a daily Valentine Death Watch in the papers, as it seemed unlikely that the manager could win back the attention and respect of his players, let alone make good on his insane promise to win 40 of the next 55 games the Mets played.

Every at bat was now fraught with peril. The tiniest of outcomes could prove the difference between someone keeping their job and losing it, or turn the Mets (who had just climbed back to .500 with their lone win at Yankee Stadium) from buyers into sellers. It was only the beginning of June, but baseball already had three bona fide checkbook flops. The Orioles, Dodgers, and Angels attempted to spend their way into competition prior to the 1999 season. All three of them were below .500, and now the Mets were threatening to turn this trio into a quartet

The only thing that could call off the dogs was a hot streak, and the Mets did their best to start one when they returned to Shea for a pair of interleague matchups on June 7. They would play exceedingly well over this stretch, alternating blowouts with gutsy come-from-behind affairs. And yet, most of the media attention would continue to focus on Valentine and his issues. This, it seemed, was exactly how Valentine wanted it.

The Mets took the opener of their three-game set hosting Toronto in commanding fashion by lashing 11 hits and six runs against an overmatched rookie named Roy Halladay. Mike Piazza went deep and Benny Agbayani hit two homers, inspiring loud cheers of BEN-NY! BEN-NY! in the 8-2 victory. The next night, star-crossed starter Jason Isringhausen earned his first W in almost two years, and did it against the exact same team and pitcher (Pat Hentgen) he'd last defeated back in September of 1997. The score was close when Izzy exited after 5 2/3 innings, but his teammates went wild in the late innings and delivered him an 11-3 win.

The finale turned out to be one of the strangest nights in the history of Shea Stadium. First, Benny Agbayani hurt himself in a freak batting practice accident; a ball bounced off the cage and smacked him in the eye, forcing him to the sidelines. Then, rumors surfaced that Bobby Bonilla had been benched, rumors the outfielder and his team were curiously cagey about discussing.

On top of this, Valentine got into a screaming match with Newsday reporter Marty Noble over accusations the manager had lobbed at him on WFAN earlier in the week and called Noble in front of a crowd of fellow media members. Oh, and the first pitch was thrown out by Venezuela's new president Hugo Chavez, who took the mound in full uniform (including pants) and brought his own glove. 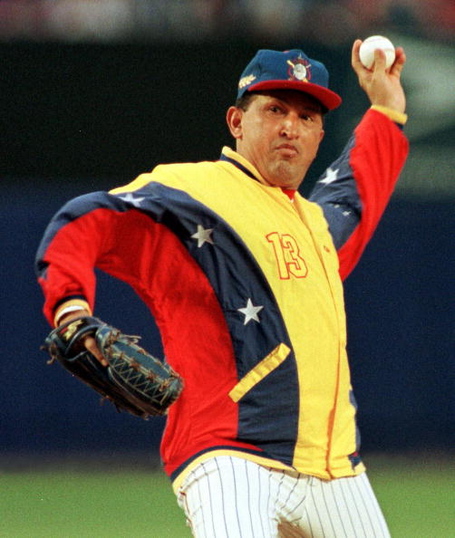 Adding to the circus atmosphere, Toronto's starter would be David Wells, making his first appearance in New York since being traded from the Yankees. More than a few in the sparse Shea crowd were on hand to cheer for Wells at the expense of the home team, and they cheered often as the bear-sized lefty shut down the Mets for eight innings, retiring 18 of 19 batters at one point. If Wells seemed like he was in a hurry to get the game over with, it might have been due to the a gala birthday celebration planned for him that evening at a hot downtown nightclub. The Times shared its eclectic guest list, which included Lorne Michaels, Penny Marshall, and Ione Skye.

The Blue Jays entered the bottom of the ninth with a 3-0 lead and a complete game in Wells's sights, but the Mets set about ruining his birthday plans when Edgardo Alfonzo and Piazza singled against Wells, and Ventura drove them both in with a two-out two-run hit. The Blue Jays turned to closer Billy Koch to shut the door, but Brian McRae defied him with a game-tying double.

When the Mets failed to bring in McRae from second, the game plodded on into extra innings. There had been plenty of weirdness to this point. No one could have guessed that the weirdness was just getting started

In the top of the twelfth inning, Piazza was called for catcher's interference, a rarely imposed penalty (and, replays showed, probably an incorrect one in this instance). Valentine burst from the dugout to protest the call and was ejected for his trouble. He returned to the dugout a short while later, which ejected managers were not supposed to do. This in itself would have been unremarkable. What was remarkable was that Valentine returned wearing a laughably transparent disguise: sunglasses, hat with indistinct logo, bootleg Mets t-shirt, mustache painted on with eye black.

The ridiculousness of the outfit made it clear that Valentine had no intention of going undetected. His was the disguise of someone who wanted to be noticed. He lingered in the dugout just long enough for him to be caught by TV cameras, immortalizing his absurd gambit for the ages.

As for the game, the Mets finally broke through on a Rey Ordoñez RBI single in the bottom of the fourteenth, giving them a 4-3 win and a sweep of Toronto. But the game was a paltry concern compared to Valentine's antics. At first, Valentine denied having re-entered the dugout, while Mets' brass remained silent on the subject, hoping in vain the story would disappear. But the evidence for Valentine's offense soon proved incontrovertible, and the press's desire to talk about it insatiable. At this point, the manager embraced the spotlight.

When the Mets began a series against the Red Sox at Shea on June 11, Valentine led reporters through the dugout tunnel for a step-by-step reenactment of his crimes. He insisted, yes, what he did might have been against the rules, but it was hardly unprecedented; he'd heard of managers sneaking back into games as part of the grounds crew or sending signals via a front-row seat. (He wouldn't name names, however.) He also asserted that he ventured no further than the top step of the stairs leading from the tunnel to the dugout, and since he hadn't really returned to the dugout, technically he hadn't broken the rules.

"One of the pictures, it looks like I was in the dugout, doesn’t it?" Valentine asked while giving his crime scene tour to reporters. "Have you guys seen that? Who else thought I was in the dugout?" Several of the reporters deigned to raise their hands. Valentine smiled and insisted, "You’re all wrong."

Dugout-Gate continued to rage as the Mets took two of three from Boston. In the first contest, a dramatic game-tying bomb by Piazza in the bottom of the ninth went to waste when John Franco put up an ugly twelfth inning that made the Mets 3-2 losers. They recovered the next night as Al Leiter turned in his second strong start in a row, and Benny Agbayani (recovered from his eye injury) went deep in a 4-2 win. Agbayni homered once more in the finale, his tenth longball since being called up, while Orel Hershiser did his best to give some rest to an overworked bullpen by pitching into the seventh. Valentine stitched together the rest by using Greg McMichael and Turk Wendell, and the Mets eked out a 5-4 win.

Not that anyone noticed, but the Mets had just completed a dominant 5-1 homestand despite Valentine's antics. Or perhaps because of them. The manager's costumery had done more than bring a note of levity to a stressed-out team. It had also put the media's focus squarely on him, leaving the players free to play.

Valentine never said he intended the disguise as a diversionary tactic, but he hinted at this as the Mets prepared for a road trip to Cincinnati and St. Louis. The National League gave him a parting gift of a fine and a two-game suspension, which he vowed to appeal, if only to "talk about it" with the league office. He did not expect to prevail, but that was beside the point.

"It's going to cost me a lot of money," he shrugged. "I don't regret the fact that it lightened the team."