The Mets have demanded buy-in for their "focused aggression" approach to hitting throughout the minors and into the majors.

On Thursday night, the New York Mets selected Oregon State outfielder Michael Conforto (Woodenville, Wash.) with the 10th selection in the first round of the MLB draft. Conforto, 21, hit .345 (70-203) with a .508 on-base percentage, seven home runs, and 56 RBI in 59 games this season as a junior for the Beavers. He was named one of the five finalists for the Dick Howser Trophy, which is given annually to the top collegiate player in the nation, and he won the PAC-12 Conference Player of the Year award for the second consecutive season. He also was the first three-time All-American in Oregon State history.

With their first-round pick, the Mets selected Oregon State outfielder Michael Conforto. He has power and patience, but will a lack of defensive ability be his downfall as a professional?

Standing 6-2 and weighing 217, Conforto bats left-handed and throws right-handed. He describes his hitting style as “relaxed aggression with smart intensity,” which seems to echo the Mets’ organizational philosophy on hitting. Simply put, general manager Sandy Alderson wants his troops to select a hittable pitch in the strike zone and connect.

“It’s difficult to say how he’s going to move through the system, but he’s a polished college player,” said Paul DePodesta, the Mets’ vice president of scouting and player development. “He fits our MO so well.”

Much has been made this season of the Mets’ hitting philosophy, mainly because they’ve been under average with the bats. As a team the Mets are batting .235 on the season, 13th of the 15 teams in the National League and 15 points below the major league team average, and their .350 slugging is dead last in the NL and MLB.

The situation has been so confounding that on May 26 Alderson fired hitting coach Dave Hudgens, who’d been one of Alderson’s allies since they began working together in Oakland in the late 80s. The release of Hudgens came on a day the team concluded a 12-game stretch in which they went 3-9 while averaging 2.6 runs, including five games in which they scored 2 or fewer runs.

Even though Hudgens was let go, Alderson remains committed to the philosophy. It’s not necessarily one of patience or taking pitches or running up pitch counts or even drawing walks. The real goal is for the batter to recognize his most hittable pitch and connect with authority, whether it’s the first pitch of the at-bat or the 10th pitch.

DePodesta calls the philosophy “focused aggression” and it’s been established throughout all levels of the organization, from the majors on down to Single-A. “Our hitting approach will not change appreciably,” Alderson said in a story by Marc Carig in Newsday on May 31.

Carig says that the philosophy is emphasized to the players from Day 1 of spring training, and if they don’t buy into it they’ll wear a different uniform. He also underscores the challenges of executing the approach: “Hitters are forced to strike a difficult balance. While they must be ready to swing at the first pitch, they must also be prepared to grind out a long at-bat if needed.

“To make those decisions, it takes elite pitch recognition skills. It takes sound mechanics to unleash powerful swings quickly enough to do damage. It takes guts to overcome the nerves that come with hitting with two strikes. This degree of difficulty requires constant reinforcement.”

DePodesta said, “A lot of it is keeping it in guys’ minds and sort of acknowledging that it’s hard to implement.” 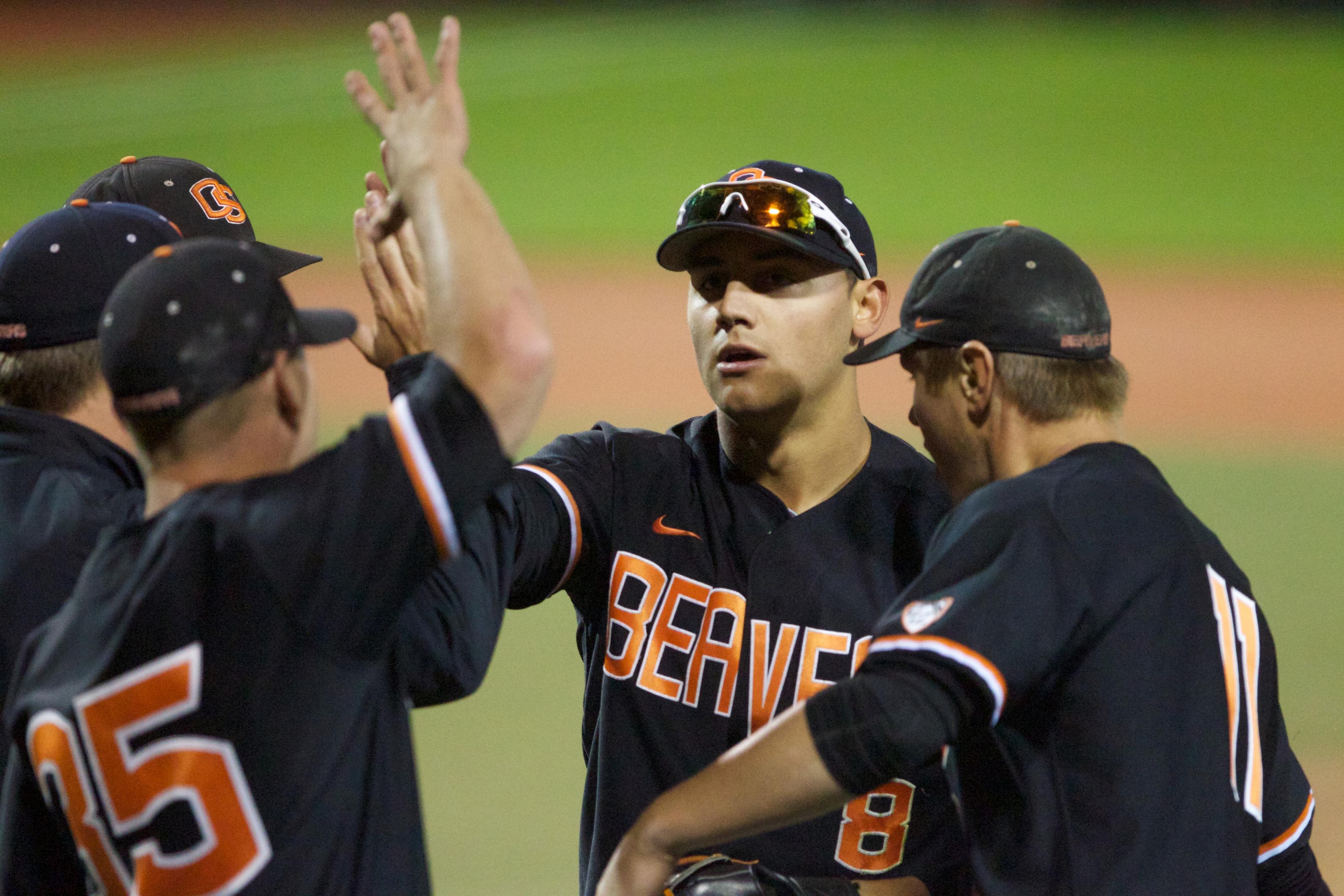 How Conforto fits into the system remains to be seen, but some scouts seem to think he has the fundamental mechanics and patience to fit the approach. “While there is some swing-and-miss to his game, he’s shown the ability to work counts, square up the baseball and could have above-average power at the next level,” according to an MLB.com draft profile video.

“At the plate, Conforto … works counts well and is willing to go the other way when necessary, and patience shouldn’t be an issue at the plate,” said Chris Crawford of MLB Draft Insider.

According to Pat Casey, his coach at Oregon Stage, Conforto has “matured as a hitter and simply gotten better. Early in his career he got fooled on balls out of the zone and off-speed, but he just kept getting better and better. For a guy that knew he was going to be a first-rounder and tempted to put up huge numbers, he did everything he could to help us win. If that meant taking a walk, he took a walk.”

In his story, Carig says that DePodesta and his scouts target prospects who might be predisposed to executing the approach once they reach the big leagues. Carig lists top draft picks Brandon Nimmo (Single-A St. Lucie) and Kevin Plawecki (Double-A Binghamton) as examples of that predisposition. Incidentally, both are thriving in the minors this year and Nimmo, in fact, is playing so well that DePodesta has said the Mets may be forced to move him up the organization sooner than planned.