Mets vs Braves Recap: Terror at Turner as Mets lose 5-3

The Mets committed three errors in an eighth inning to forget at Turner Field, transforming a 3-1 lead into a 5-3 deficit in the process.

Share All sharing options for: Mets vs Braves Recap: Terror at Turner as Mets lose 5-3

Yes, the Mets were up 3-1 heading into the bottom of the eighth inning. But the game dragged as Zack Wheeler walked five in 6.1 innings and the offense disappeared after scoring one run in each of the first three innings. With Jeurys Familia and Jenrry Mejia waiting in the bullpen, it seemed likely that the Mets would come away with a win, ugly as it was. Then the Mets played probably their worst defensive inning of the season and exited that eighth inning down 5-3. 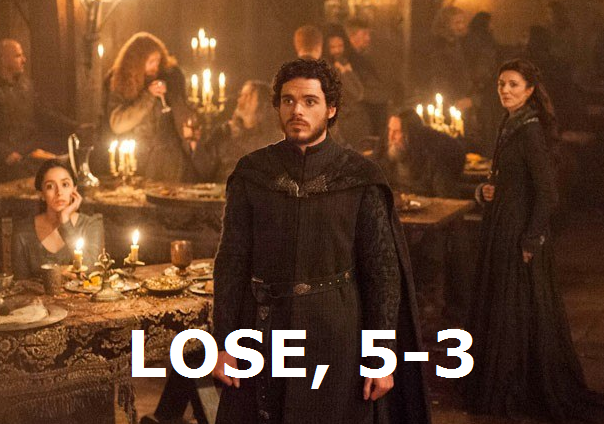 Familia started that eighth by allowing back-to-back singles to Justin Upton and Jason Heyward. It looked like he would cool off the rally when Chris Johnson tapped a tailor-made double play ball right back to the mound. However, after fielding the ball cleanly, Familia bounced the throw to second base. All runners were safe, and instead of having a runner on third with two outs, the Braves had the bases loaded with no outs. Next up was Tommy La Stella, who sharply singled up the middle to drive in one run. The usually god-like Juan Lagares bobbled the ball, allowing the tying run to score. 3-3, Mets lead gone.

Next up was Christian Bethancourt, who grounded into a fielder's choice. Then Ryan Doumit walked, loading the bases for B.J. Upton. Familia struck out the struggling Upton, and it looked like the Mets might escape the inning with a tie score. It was not to be. Andrelton Simmons hit what looked like an inning-ending groundout, but Eric Campbell committed the Mets' third error of the frame and Johnson scored the go-ahead run. Freddie Freeman drew a bases-loaded walk against new Mets pitcher Dana Eveland to extend the Braves' lead to 5-3.

Craig Kimbrel pitched the ninth inning and it went about as well as one might expect -- he sent the Mets down one-two-three. The Familia error was the turning point of the game. If he makes the play, it's likely that the Mets win. But he didn't and things fell apart. Familia's been great for a couple months now -- 31.2 IP, 39 K, 9 BB, 1.42 ERA since May 1 -- so he was due for a poor game. It's a shame it had to happen tonight.

If the Mets didn't blow the game, Zack Wheeler's gutty start would have been the big story. He didn't have his best stuff and walked five, but he allowed just one run in 6.1 innings pitched. He continued to generate ground balls and found a way to not let the game get out of hand. It's the kind of game that even the best pitchers have to grind out once in a while.

The Mets led this game 3-0, thanks to a Curtis Granderson solo home run to start the game, a Travis d'Arnaud RBI double in the second inning, and a Chris Young sacrifice fly in the third inning. The lineup shut it down after that, though, going 2-for-19 in innings four-through-nine against Braves starter Alex Wood and three relievers.

After this loss, the Mets are 37-46, eight games back of the NL East-leading Braves. Our heroes will try to even the series Tuesday night at 7:10 pm ET. The pitching matchup is Daisuke Matsuzaka vs Mike Minor. Happy July everyone. 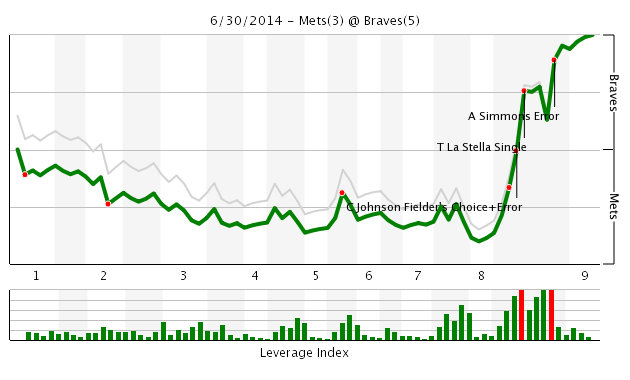