Mets Uniform Review jumps in a time machine with some Pirates

The Mets wore some brand new uniforms, and Pittsburgh flashed back to two different eras.

Share All sharing options for: Mets Uniform Review jumps in a time machine with some Pirates 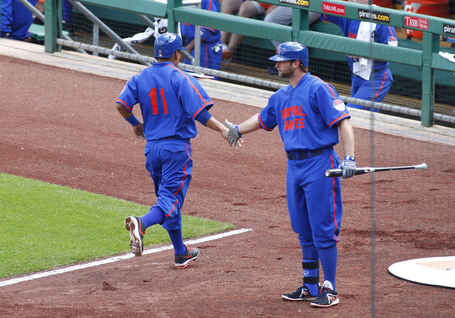 I'm not sure that the major leagues are ready for bright royal pants worn with royal blue jerseys, and that jersey script is rather bland, but the Mets do earn bonus points for attaching "RG" helmet decals to their regular batting helmets in place of the "NY" decal. The usual helmets would have looked fine with the matching colors and all, but the equipment manager went the extra mile. Good job.

Two other notes: 1) The Royal Giants played from 1905 until 1942 and were named after founder John Connor's Brooklyn Royal Cafe. 2) Given the Mets' owners love of the Dodgers, it's kind of surprising that the team didn't wear "Brooklyn" on its chest on Saturday. 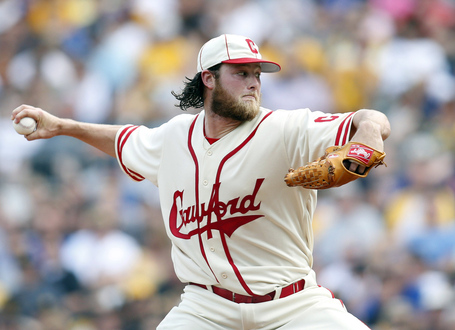 Of course, the Mets weren't the only team going retro at PNC Park. The Pirates dressed as the Crawfords, a Negro League squad that called Pittsburgh home from 1931 to 1938 before moving to Toledo in 1939. As you can see, the script on the jersey has only a singular "Crawford" on it, and that's probably because owner Gus Greenlee didn't want to confuse potential customers about the name of the club he owned, Crawford Grill.

Although the Pirates have worn these jerseys before, this is the first time that the Mets are getting a good look at them, and they are pretty sharp. Most of the uniform is basic, but the hats are very stylish. Most teams with cream-colored jerseys don't wear cream (or white) hats, but the Crawfords cap looks awesome with its red stripes and bold red "C." It gives the whole look a nice shot of personality. 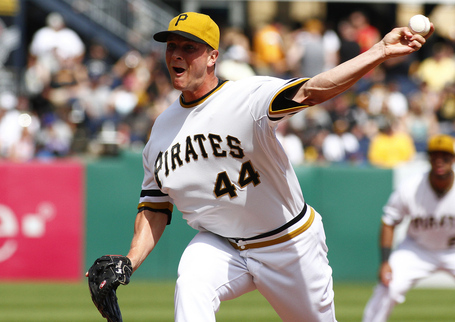 On Sunday, the Pirates went with their 1970s throwbacks that they wear regularly for weekend home games. Unlike some other Pittsburgh throwbacks you can imagine, these aren't radically different from modern uniforms, but the pullover style and mustard-and-black striping on the waistband give them a definitive throwback feel. The Mustard cap also looks swell, although I might like it better if it was that color all the way through instead of with a black brim. Since the Pirates wear those hats all the time these days, it would be nice if they got matching helmets sometime soon. 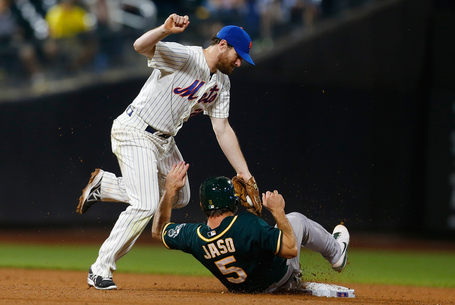 The A's wore green during both of their nights in Queens, and the Mets were smart to stay away from their own colored sets. When Oakland was visiting Baltimore earlier this season, the Orioles wore black to on the same day that Oakland wore these alternates, and the clash of dark colors was so infuriating that Manny Machado threw a bat at Josh Donaldson! Who knew that Machado was such a uniform expert? So much passion! 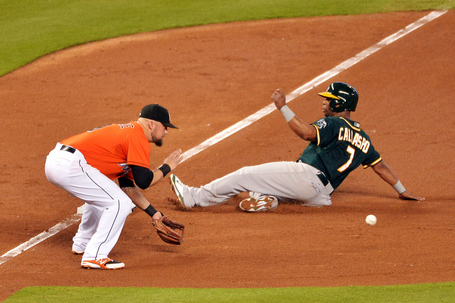 Now this is the way you pull off two colored jerseys in the same game. The orange of the Marlins and the green of the A's might not match that well, but at least you can tell the teams apart. I still have an issue with the Marlins refusing to wear their orange hats with this uniforms, though. You can see Casey McGehee's black accessories match his hat, but not any other part of the uniform. If you're going to go bright, go bright all the way!

That goes for Oakland, too. Why wear green in Miami when you can wear those bright yellow tops and create the most atomic uniform matchup since Syracuse met Michigan in the 2013 NCAA Basketball Tournament? 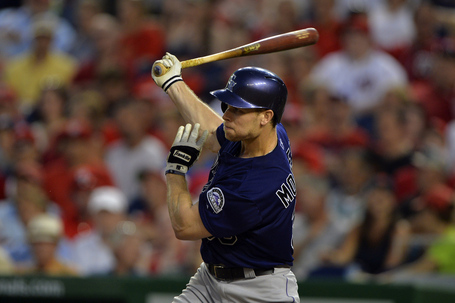 The Rockies wore their purple alternatives for this game, which are okay, but I'm not thrilled with the club's use of purple with black in general. No matter what Colorado or Northwestern say, purple doesn't go with black, so the baseball team should keep it's silver piping and either go all purple or all black with everything else. 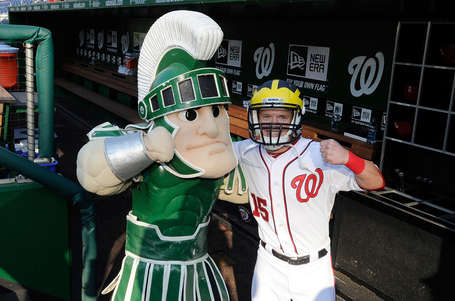 Speaking of Northwestern, the Big Ten mascots were in Washington to welcome Maryland to the conference, and Michigan native Nate McLouth got into it with Michigan State mascot, Sparty. I know McLouth had to be a pretty big Wolverines fan to have a helmet just lying around in the locker room, but I have to say, a Wisconsin helmet would have gone much better with the curly "W" on his chest.