Mets vs. Marlins Recap: deGrom and Amazins roll over Miami in first half finale

The Mets played one of their best games of the year on Sunday. We can only hope that the good times continue to roll after the All-Star break.

Share All sharing options for: Mets vs. Marlins Recap: deGrom and Amazins roll over Miami in first half finale

The Mets knew that if Jacob deGrom pitched today like he did in his last outing against Atlanta, they wouldn't need to score many runs to defeat the Marlins. Well, deGrom was awesome again, but the Amazins scored a bunch anyway. The result was a 9-1 win to cap off an 8-2 homestand. Perhaps it's too early to bury these 2014 Mets after all. 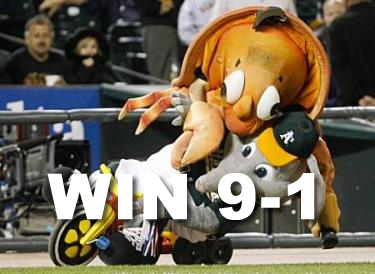 The Mets didn't waste much time asserting themselves in this one. Lucas Duda led off the top of the second with a line drive double to left-center field. Juan Lagares then laid down a bunt that Miami starting pitcher Brad Hand had trouble getting to. The throw to first wasn't in time, and the Mets had runners on the corners with nobody out. Chris Young was in the starting lineup today, so he didn't have to wait until the eighth inning to drive in a run. He came through with a sac fly to put the Mets up 1-0.

The Amazins failed to add on any more runs in the second, but there would be plenty of scoring to come later. In the meantime, deGrom was cruising through the first three innings. He notched a pair of strikeouts with high fastballs to get out of the second, and he got the first two outs in the third before Christian Yelich singled for Miami's first hit. Yelich was erased immediately when Anthony Recker threw him out trying to steal second, but more trouble would come in the fourth.

After deGrom impressively punched out Giancarlo Stanton with a curveball to record the second out of the inning, Casey McGehee poked a breaking ball up the middle for a base hit. Garrett Jones appeared to end the inning for the Marlins with a fly ball to shallow right field, but Eric Campbell lost the ball in the sun, and it fell in for a double. With runners on second and third, Marcell Ozuna hit a ground ball to short that Ruben Tejada attempted to run around. Tejada fielded and threw the ball cleanly, but Ozuna was too quick, reaching first base on time for an RBI single. Perhaps sick of depending on his defense for help, deGrom struck out Ed Lucas with high cheese to end the frame.

The score was now tied at 1-1, but the Mets would strike back in the bottom of the fourth with some unexpected offense. With two outs and Chris Young on second after a walk and a ground out, Hand chose to walk Tejada to pitch to deGrom. This was an interesting decision, because any Mets fan would tell you that deGrom has been swinging the bat just as well as Tejada this season. Sure enough, the pitcher hit a single up the middle for his first major league RBI, and Curtis Granderson followed with a bloop double down the left field line to plate another run.

The Amazins were just up 3-1, but it felt like a comfortable lead considering how well deGrom was pitching and how quickly the Mets had put their starter back on top after what seemed like a fluky Miami run. The fifth inning did nothing to dispel this notion, as deGrom used a pair of breaking balls to get two more strikeouts in a perfect frame.

In the bottom half, Jacob Turner entered the game in place of Hand, who apparently suffered a leg injury when he was struck by a Recker comebacker in the fourth. Turner was greeted by a David Wright double on a soft liner down the right field line. Two batters later, Lagares lifted a double of his own over Ozuna's head in center field to give New York a 4-1 advantage.

Miami looked to start a comeback bid in the sixth when Adeiny Hechavarria led off with a single and stole second base before a walk by Stanton brought the tying run to the plate. Fortunately, all Casey McGehee could do was roll a ground ball towards second base, and that was converted into a double play by Campbell, Tejada, and Duda. deGrom followed with a strike out of Jones to get out of trouble for good.

The bottom of the sixth saw the Mets tack on a fifth run, but the effort did not come without controversy. With Granderson on first and two outs, Wright ripped a double down the third base line. Granderson was waved home by Tim Teufel, and he appeared to beat the throw from Christian Yelich, but Miami catcher Jeff Mathis used his foot to block Granderson's slide and tag him out before he could touch the plate.

Granderson was initially called out by home plate umpire Paul Schrieber, but rookie second base ump Will Little ran in, appearing to overrule Schrieber and call Granderson safe. Was Little saying that Mathis had blocked the plate and not allowed Granderson a proper lane to slide in? That's what it looked like, but Little was instead calling obstruction on second baseman Ed Lucas. A replay showed that Lucas was standing in the basepath just beyond second base, but he appeared to move out of the way just as Granderson raced by. Nevertheless, the call stood without a challenge, rendering any plate blocking debate moot.

The Wright double put the Mets ahead 5-1, and they wouldn't need any more runs to win this one. deGrom retired the Marlins in order in the seventh, and Jeurys Familia got through the eighth with the help of a great diving stop by David Wright as well as another double play started by Campbell.

In the bottom of the eighth, Kevin Gregg came in to relieve Turner and promptly allowed the Mets to load the bases. Gregg was in turn replaced by Chris Hatcher, who walked Wright to force in a sixth New York run. Duda, Young, and Recker all followed with RBI singles to make the score 9-1 before Sam Dyson came on and got two outs to finally put the Mets' bats to rest.

To officially wrap things up, Buddy Carlyle retired the Marlins in order in the ninth.

The Mets don't play again until Friday night at 10:10 p.m. in San Diego. Bartolo Colon and Ian Kennedy are your probably starters for that game. Happy All-Star break, everyone! 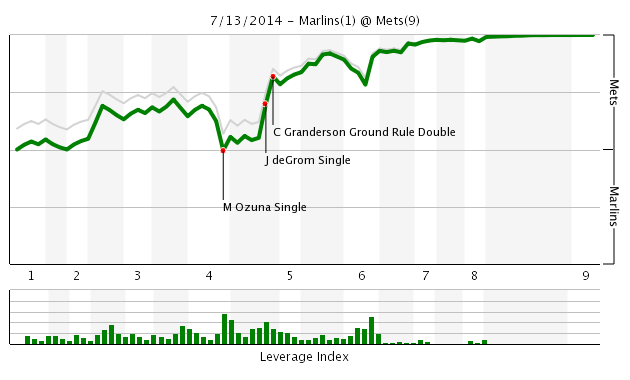