The Mets' forgotten first half

A look back at moments from the Mets' first half that may have slipped your mind.

Share All sharing options for: The Mets' forgotten first half

The first half of the Mets' season wasn't always fun but our heroes finished strong, winning seven of their last eight games. Among the big storylines of the first half were Daniel Murphy's All-Star-worthy campaign, Jon Niese's career year (so far), the emergence of Jacob deGrom and Zack Wheeler, and Lucas Duda's post-Ike Davis mashing. Mixed in with these major storylines were some minor happenings. This post recalls moments from the first half that may have slipped your mind. These first one is technically from the offseason but it's worth remembering.

A meeting with Jay Z

"Mets, Jay Z hold secret meeting about Cano" was the eye-catching New York Post headline that wasn't as exciting as it initially seemed. Jay Z's sports agency group represents Robinson Cano, so Mets reprentatives, including Jeff Wilpon and Sandy Alderson, had dinner with the rapper to touch base. The chances of the Mets signing Cano were nearly zero, but it afforded Mets brass a chance to get to know Jay Z and co. a little better. Maybe they'll cross paths again during future free agency periods. Cano signed with the Mariners and I came up with some Jeff Wilpon rap lyrics, linked here.

When Daniel Murphy's wife gave birth to the couple's first child in late March, Murph did what most fathers would do -- he took some time off from work to be with his family. It just so happened that the birth of Noah Murphy coincided with Mets Opening Day. Murphy taking paternity leave and missing a game didn't sit well with some nonsensical talk radio hosts, who criticized Murph. Luckily, just about every reasonable person took Murphy's side in the kerfuffle and defended his decision. He returned for game three of the season and made the All-Star team. Not a bad first half for Murphy, both personally and professionally.

To celebrate the six-month anniversary of his Tommy John Surgery, Matt Harvey tweeted a picture of himself in the hospital giving the middle finger. He later deleted it but you can't delete anything on the Internet forever. Here it is, in all its glory: 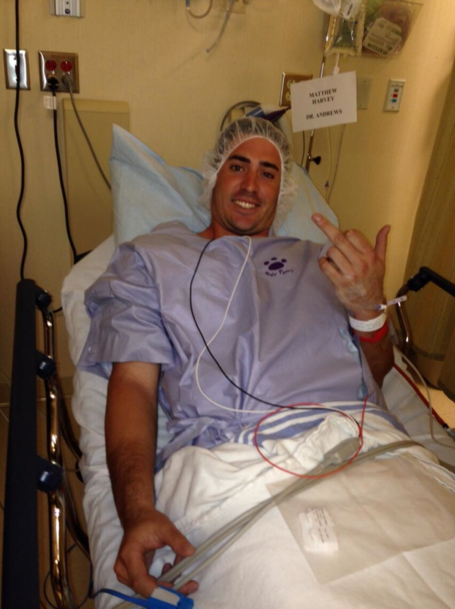 Semi-related: here is a great Harvey quote from February 2012 (via former Mets beat writer Andy McCullough at the Star-Ledger):

"People have asked me that before," Harvey said. " ‘Why aren’t you on Twitter?’ " He shrugged. "I don’t really like people knowing what I’m doing all the time."

Just because many fans and members of the media often blow things out of proportion when it comes to LOLMets doesn't mean the Mets don't do stupid things. Such was the case with the ill-advised "True New Yorker" loyalty oath letter the Mets sent out to fans. Past greats like Jerry Koosman, Dwight Gooden, Keith Hernandez, and Ron Darling lent their names to the letter, part of which read:

So today we're issuing a call to all Mets fans: Show your New York Mets pride -- stand up and say you're a true New Yorker.

Your support matters; we wouldn't have won without you. So we're calling on you to give today's club the same chance we had.

If you agree that the fans have a role to play in making amazing things happen, add your name to this letter.

I understand trying to increase interest in the team -- it was sent out after a strong homestand -- but this was just weird. Not the worst thing in the world, but not good. Darling later disavowed his participation in the project. He'll probably give more consideration before signing on to future Mets promotions.

Lucas Duda was hospitalized for a night in mid-May after getting food poisoning from a Shake Shack burger. Phillies manager Ryne Sandberg also blamed Shake Shack for a case of food poisoning he caught while the Phils were in town for a series with the Mets. Shake Shack founder Danny Meyer took umbrage with Duda and Sandberg's claims:

"It's highly unlikely... we haven't heard of one other case of food poisoning. We don't know for sure a Shake Shake burger made them sick."

For his part, Duda was able to make peace with Shake Shack a few days later:

The Shack is Back! Lucas Duda is ready for a delicious @ShakeShack burger! pic.twitter.com/TCB0UWu4Qo

Kyle Farnsworth has enjoyed a long and generally serviceable career. However, he was terrible in his 17-inning stint with the Mets early this season, back when Jose Valverde was still around and the Mets bullpen was a dumpster fire. Farnsy was cut on May 14 and was not happy about it. When asked what he would do next, he said:

He was picked up by the dreadful Houston Astros, who the Mets will play in the last series of the season. Unfortunately, the revenge fantasy was squashed when the Astros cut Farnsy in late June. He's still a free agent, so stay tuned to find out the next stop on the vengeance tour.

Jacob deGrom hasn't just been terrific on the mound. He's also batting an awesome (for a pitcher) .280/.308/.320 in 30 plate appearances. On May 15, in the first at-bat of his MLB career, he singled to center field to snap an 0-for-64 hitless streak by Mets pitchers to start the season. Zack Wheeler, Bartolo Colon, Jon Niese, and Daisuke Matsuzaka have all notched base hits since then, but Dillon Gee is still riding an 0-fer.

In mid-May, a Mets employee accidentally sent an e-mail to the New York media that included Sandy Alderson's credit card info. Apparently, the staffer was trying to secure tickets to The Lion King on Broadway for the Mets GM but sent the message to the wrong recipients. Alderson has good taste; The Lion King is delightful. And it's a wonder that this "story" was made public.