The All-Star Game featured not one, but two new sets of caps for baseball's best players to show off.

Share All sharing options for: Mets Uniform Review is chilling up north

There were only three games of "real" baseball last week, but the All-Star game in Minneapolis provided plenty to discuss with mutiple new hat designs as well as some uniform quirks. After the break, the Mets got back to business in San Diego, where the Padres taught them how to make a camouflage jersey looks alright. 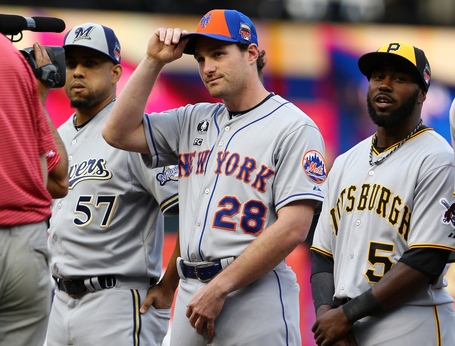 Looking good, Murph! The Mets' second baseman was on hand at Target Field to show off a flashy All-Star hat design that was almost too bright when compared to the team's understated road jersey. Also of note was that the Mets and other teams moved sleeve patches to the front of their shirts to make room for an All-Star patch on the right sleeve. You can seen the Ralph Kiner and Frank Cashen memorial logos below Daniel Murphy's right shoulder in this picture.

Apparently the patches are a lot more noticeable on the front of the uniform, because my Phillies fan friend asked me what the "FC" meant during the All-Star game. Maybe the Mets should wear it there all the time? To be fair, New York hasn't yet played Philly while wearing the patch. 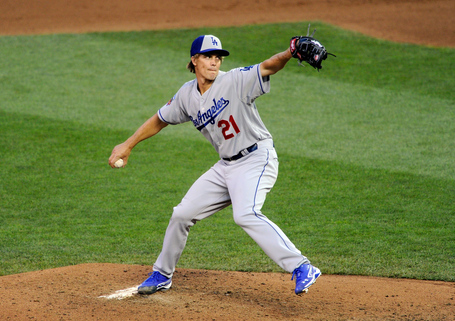 Two things about this picture of Dodgers right-hander Zack Greinke: First, the team wore "Los Angeles" across its chest for the All-Star Game even though it has been favoring the new, alternative "Dodgers" script during the regular season. Second: the All-Star caps for National League teams used gray instead of white front panels to match the gray NL jerseys. I liked how the aesthetic worked during the game, but it's a questionable marketing move to design a hat with one specific game in mind. 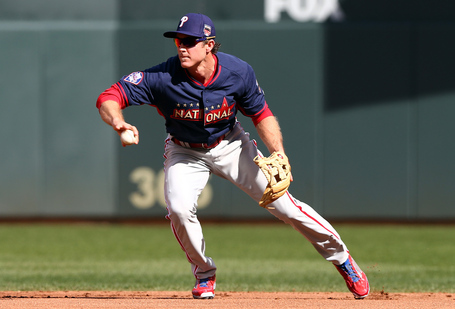 Usually these All-Star batting practice jerseys base their script off of the host club's script, but this year was a little different. The jerseys were red and blue like the Twins, but the "National" and "American" script appeared to be lifted right from the All-Star Game logo and not from anything the Twins wear with regularity. As a result, the jerseys look a little more generic than they have in years past. I suppose that's a good thing if you want an All-Star practice jersey but aren't too fond of the Twins. 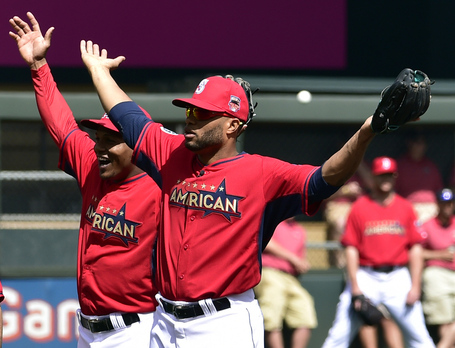 The All-Star batting practice caps were decidedly uninteresting. NL clubs wore navy caps with a red and white logo, while AL clubs wore red caps with a blue and white logo. Yes, the hats look good with the batting practice jerseys, but I'm curious to see how well these do at retail. What is a Seattle fan to do with a red Mariners cap? There aren't even any local teams whose colors match that cap. It will clash with everything, even when the Sonics come back. At least Mets fans can wear a navy "NY" cap to the Rangers game or something (or even go incognito at Yankee Stadium!).

One other thing I'm not a fan of is how the NL practice jerseys were blue on the front and red in the back (reverse for the AL). This made the All-Star celebrity game nearly impossible to follow. I realize I'm the only one who watches that, but I'd like to know which team Nelly just hit a home run for. 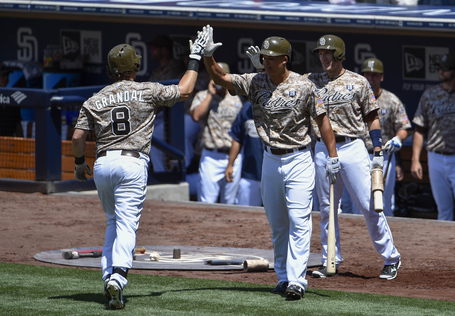 I know a lot of fans aren't big on camouflage jerseys, even if they are supposed to be patriotic. There are other ways, after all, to support the good ole US of A without dressing up to hide in the desert. The Padres, however, do the camouflage look right by not clashing it with their regular colors. When the Mets have tried it out this season, they use their regular blue and orange script over a camouflage jersey to create a look that is a bit of a mess. The blue helmets don't help, either.

The Padres, on the other hand, use brown script and special batting helmets to form an organized uniform that is actually less boring than their normal home outfit. This is just one of many reasons why the team should go back to the old mustard and mud uniforms that they won the 1984 pennant with.