The Ruben Tejada Experiment is over, it is time to #FreeWilmer: Part I

Can the Mets ever win with Ruben Tejada?

Share All sharing options for: The Ruben Tejada Experiment is over, it is time to #FreeWilmer: Part I

If you were an optimist, it would have been totally defensible for you, in the spring of 2014 to think that it would be within the realm of possibility for the Mets' former-incumbent and oft-maligned shortstop Ruben Tejada to return to Flushing and turn in a decent season after two lost years. I wasn't optimistic about the chances of that happening, but I was willing to hope.

While Ruben Tejada has been passable as a major league shortstop in recent weeks, he shouldn't be taking playing time away from Wilmer Flores.

The 2014 Mets aren't necessarily a team built to win it all, but Sandy Alderson still created the team with a winning record—if not more—in mind. Wilmer Flores' role perfectly embodies that philosophy.

As you'll recall, Tejada first appeared in the major leagues as a precocious 21-year-old, filling in for the injured and soon-to-be-departed Jose Reyes. The next season, however, was Tejada's miniature star turn: in 96 games, he batted .284 with an on-base percentage of .360. He only slugged .335, but so what? He posted positive defensive numbers and a total of 1.6 fWAR in only 96 games. And remember, he was only 22 years old.

Since then, however, it has been an up-and-down trip for Tejada (mostly down). Although he batted .289/.333/.341 in 2012, he hit only .202/.259/.260 in 2013. His defensive numbers remained strong, but over those two years he was injured, inconsistent, ineffective, and, ultimately, banished to the minor leagues by the organization that once considered him the heir apparent at shortstop.

Enter 2014: Ruben Tejada's chance at redemption. Without a clear-cut challenger to his position at shortstop, and after allegedly recommitting himself to his fitness after a lost season, Tejada was handed the reins at shortstop and told to run with them. What has happened, however, can only be described as a failure (though not a complete disaster).

After 84 games, Tejada has continued to post his traditional solidly-above-average defensive numbers, with a +1.9 UZR (+3.9 UZR/150). However, his ability with the bat has completely evaporated, as he has hit only .233/.353/.292 for the year. Overall, Tejada has been worth +0.6 fWAR, just barely above replacement level following a season in which he was actually below replacement level.

Tejada's .292 slugging percentage is terrible, but you might not appreciate just how terrible it is. Tejada is second to last out of all major leaguers in slugging percentage—161st out of 162, ahead of only Everth Cabrera (and just barely). If you were to lower the qualification standards to include any player with 200 plate appearances, Tejada is only ahead of Jedd Gyorko (demoted) and Raul Ibanez (cut).

In fact, that .292 slugging percentage, if it were to stand, would be the lowest position-player slugging percentage since 2010, when Cesar Izturis was somehow allowed to hit .230/.277/.268 for the Orioles. There have only been 17 player-seasons since 1990 in which a player who qualified for the batting title posted a slugging percentage of .297 or less (including luminaries such as Alfredo Griffin, Kevin Stocker, and Ramon Santiago).

Overall, Tejada is ranked 22nd out of 28 among shortstops in fWAR (250 or more plate appearances): 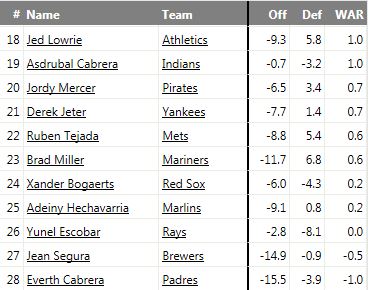 Even worse, Tejada's one saving grace this season, statistically, has been nothing more than a mirage: His artificially high walk rate. After walking 9.3%, 5.4%, and 6.6% of the time the last three years, Tejada's walk rate is up to 14.4% this season.

Even more troubling is that Tejada's strikeout rate has ballooned to 18.4%, his highest ever and nearly league average:

But the Mets are a team looking for ways to improve, and are faced with a conundrum whereby they are okay or good at five out of eight positions on the field (1B, 2B, 3B, CF, RF) and have potential at another (C). Only shortstop and left field present areas of potential improvement, insofar as everyday players are concerned—and only one of those positions has an in-house candidate ready to take over.

In Part II, I will set forth the argument in favor of handing Wilmer Flores the everyday job and seeing what happens.