The organization's top pitching prospect has unspectacular stats this season in Triple-A Las Vegas, but his inflated ERA belies an otherwise impressive 2014 season.

New York Mets pitching prospect Noah Syndergaard came into the 2014 season looking to follow the same path that Matt Harvey and Zack Wheeler did the prior two years, spending the first half of the season in Triple-A before coming up to the bright lights of New York City. He was coming off of a statistically amazing season, striking out 133 batters in 117⅔ innings with just 28 walks and a 3.06 ERA as a twenty-year-old.

However, this season he has been lit up in Triple-A Las Vegas. He has a 5.34 ERA and 1.527 WHIP in 18 starts, scaring many Mets fans into thinking he isn’t as good as they previously thought.

So, this past week when ESPN’s Keith Law ranked the Mets as the fourth-best farm system in baseball, he surprised many fans by writing: “Noah Syndergaard (No. 1) has had an excellent year in the pitchers’ hell of Las Vegas.”

Law continued to push forward this idea in his Wednesday chat, saying, “[Syndergaard] seems unfazed by the altitude out there and it’s not like he’s having bad results,” and “you have to look past Syndergaard posting a 6 ERA in Vegas and realize he’s doing what you want him to do.”

If you just look at the basic stats of what Syndergaard is doing this year, it’s hard not to think Law is crazy, high, or just trolling people. However, if you look beyond Syndergaard’s poor numbers, you can see where he is coming from.

Fans of struggling teams like the Mets often have a habit of perusing through minor league box scores and drawing conclusions from stats. After last season, fans decided Syndergaard was the best pitcher on the planet based on his stats in Single- and Double-A, and those beliefs were reinforced by reports from different scouting websites.

There was little doubt that Syndergaard was one of the most exciting pitching prospects in baseball coming into this season, but the fans who believed Syndergaard was great because of his stats are now thoroughly disappointed in his season this year because of the punishment Vegas has inflicted upon him.

Vegas has a reputation for being a tremendous hitters’ park. Every year, the runs scored per game in Vegas are higher than most other minor league stadiums outside of the Pacific Coast League (with the possible exception of the California League). Heading into this season, the Star-Ledger’s Mike Vorkunov wrote about the issues of the stadium and how the 51s are trying to improve the conditions. 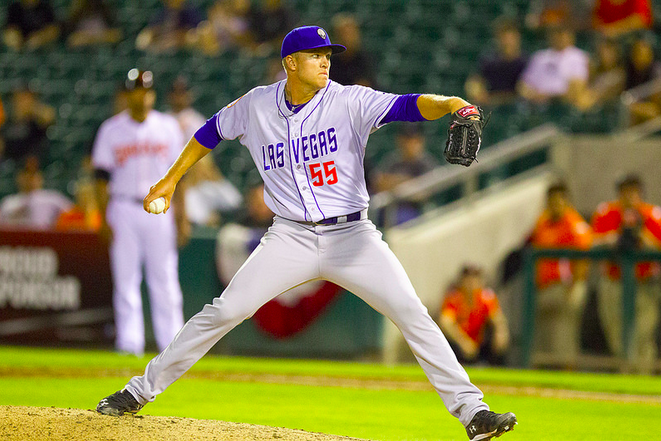 Minor league stats are far from meaningless, but they should be taken with a grain of salt, even beyond specific hitting and pitching environments. Matt Harvey had a solid but unremarkable 3.68 ERA and 1.318 WHIP while playing in a fair environment in Buffalo, but exceeded those numbers tremendously after getting called up.

Harvey is a freak who by all accounts started throwing harder with more polished secondary pitches after getting called up, and expecting the same leap for Syndergaard is wildly optimistic. However, Syndergaard’s current struggles in Vegas can be compared to Harvey’s performance in college. Scouting pitchers in minor league environments like Las Vegas and the PCL is similar to scouting college pitchers before the NCAA switched to BBCOR bats.

Looking back at Harvey’s statistics during his career at UNC, they do not look like the production you would expect from someone who dominated the major leagues in 2013. This was the case especially with Harvey’s sophomore year, during which he recorded a bloated 5.40 ERA and 1.73 WHIP in 75 innings, hardly a small sample. He improved in his junior season to a 3.09 ERA and 1.20 WHIP, solid numbers but not what you would expect from a major league stud.

Despite the unremarkable statistics, Omar Minaya actually made a good decision and trusted the scouting department, selecting the future star with the seventh overall pick. Harvey struggled in college for many reasons, the most important being that he just wasn’t as good then as he was three years later. But pitching to aluminum bats is a daunting task, as weak contact can lead to line drives spraying across the field and grounders flying through holes.

In Las Vegas, it is a similar situation. The part of Las Vegas that gets brought up the most is how the ball flies there, causing normal fly balls to leave the yard. However, a huge aspect of the environment is the hard dirt in the infield caused by the desert climate. Balls hit in Vegas are similar to balls hit by aluminum bats in that normal ground balls shoot through holes while hitters can rely on sub-par contact to drive the ball.

Pitchers can respond in a number of ways to this aluminum-bat effect (as I’ll refer to it from now on). Ideally, a pitcher wouldn’t worry about his numbers and would approach hitters as if he was pitching in a normal environment.

Pitching in a terrible environment can force pitchers to make improvements in order to succeed. Jacob deGrom came into this season and was able to excel in Vegas because of a remarkably improved changeup, which we now see in every start from him in the big leagues. Instead of worrying about giving up hard contact, deGrom found a way to miss bats and succeed despite the factors working against him.

Pitching in a terrible environment can force pitchers to make improvements in order to succeed.

Syndergaard hasn’t been able to miss bats as much, which could benefit him in the long run. He is currently a three-pitch pitcher, throwing a fastball-curveball-changeup mix. Last season Syndergaard’s curveball took a huge step forward and was a major reason for his statistical success while his changeup lagged behind. However, Vegas has a reputation for being a place where it is difficult to throw effective breaking pitches, and as a result, his numbers have suffered as he is left with a plus-fastball and two fringier pitches.

Even if Syndergaard’s changeup never becomes a plus-pitch for him, he should be an effective big-league starter. However, if he is ever going to be a front-of-the-rotation guy, having a third pitch with which to miss bats will put him over the top. As long as he doesn’t let the aluminum-bat effect change his approach to pitching, the odds of his changeup becoming a plus offering increase as he is forced to throw it more often.

And even without his curveball there to help him, Syndergaard has still missed a ton of bats this year. His strikeout rate isn’t quite as good as last year but just marginally so. He had a strikeout rate of 24.8% in High-A and an ungodly 32.2% strikeout rate in Double-A, while he has struck out 23.1% of hitters this year.

Some pitchers try and nibble at the edges of the zone when thrown into a tough environment because they are afraid of giving up hits, and while it possibly improves their ERA by a marginal percentage, it can create bad habits.

The fact that Syndergaard hasn’t changed his approach is undoubtedly one of the reasons Keith Law believes his performance in Triple-A is just fine. Just like his strikeout rate, Syndergaard’s walk rate is not as good as last year, but just slightly worse. In 2013, he walked 6.2% of batters in High-A and 5.6% in Double-A, while this year he has walked a still very respectable 7.3%. 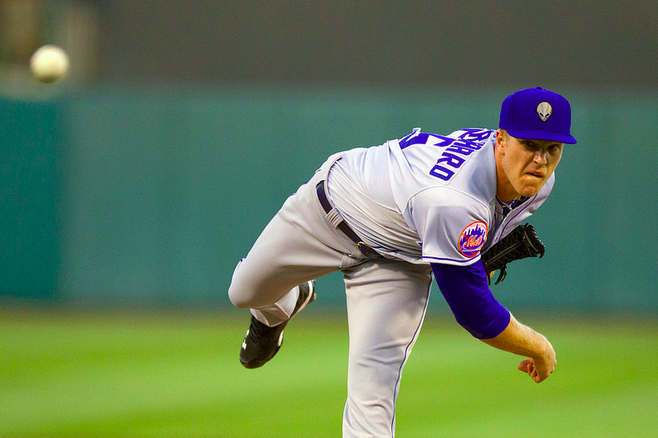 Syndergaard also has an absurdly high BABIP-against of .379 in Vegas. BABIP is an imperfect stat as it can mean a hitter is either very lucky or he consistently makes hard contact. As far as Syndergaard’s BABIP-against in Las Vegas, it can easily be explained as a result of the aluminum-bat effect combined with bad luck.

Odds are that Syndergaard is giving up more hard contact than he normally would since his curveball is less effective, but still, the fact that hitters are hitting .379 against him when making contact is comical. Given the quality of his stuff, allowing hard contact shouldn’t be an issue for him moving forward.

No matter which way you look at it, Noah Syndergaard is not having an ideal season. In a perfect world, he would be striking out everybody and forcing the Mets to call him up. However, because of many factors involved, he is doing just fine in Vegas despite what his stat line indicates. He is still attacking the zone while working with one less plus-pitch than he usually has, and all the while he is being forced to improve his changeup.

When looking at a player, there are a plethora of factors to look at outside of their statistics. Yes, it was nice to see Syndergaard strike out 32.2% of hitters in Double-A last season, but that doesn’t mean his 1.527 WHIP this year should have the same meaning. He’s still throwing hard, improving his location, and most importantly staying healthy (despite a scare).

As hard as it may be to believe from his stats, Syndergaard is having a good season.