The Ruben Tejada Experiment is over, it is time to #FreeWilmer: Part II

The Mets need to quit horsing around and just let Wilmer Flores start every day.

Share All sharing options for: The Ruben Tejada Experiment is over, it is time to #FreeWilmer: Part II

In Part I we argued that the Ruben Tejada Experiment was over (although it might make for a cool band name) by explaining that Tejada's performance this season, and in his career, was lackluster. We did this by pointing out three salient facts:

That was, I thought, the easy part. Although we concluded by saying that Tejada was indeed a major league caliber player, who would rush to defend Tejada? Apparently more than a few people, including Dan Haefeli of Rising Apple, who wrote a thoughtful counterpoint. Unfortunately, I'll need to address that in another article, as now I must answer the hard part of the Wilmer Flores question: The justification behind #FreeWilmer.

Wilmer Flores, the player, needs little to no introduction to the New York Mets' fanbase. Flores was born in Venezuela in 1991 (!!) and has been in the Mets' organization since 2007, when he signed for $750,000 (he was considered one of the top hitters in the international class that year). Promoted aggressively throughout the Mets' minor league system, Flores was often playing with players half a decade older than him, yet still performing admirably. Check this out: 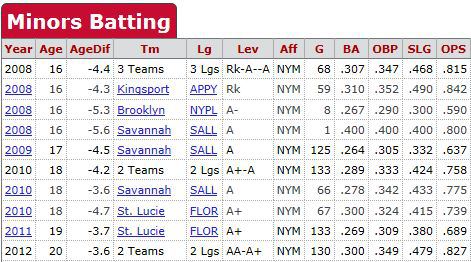 Flores was regularly four or five years younger than the average players in his league, yet made his way to Class-A St. Lucie by the time he was only 18 years old. For those of us who were once 16 years old (I assume all of us) we know what a huge difference four or five years makes at that age. Nonetheless, Flores prospered, leading Baseball America to rank Flores as the Mets' second-best prospect three years in a row, from 2008 through 2010, as well as rate him in their MLB Top 100 three times. When ESPN's Keith Law named Flores the #47 prospect in baseball in 2011, he wrote that Flores's "bat should profile at any position because of his quick wrists, short path to the ball and strong follow-through with good loft for future power as he fills out."

But that's ancient history, how about lately? Well, Flores's bat sure did mature, and he began to crush the ball at every level of the minor leagues that dared to attempt to contain him. Minor league expert John Sickels wrote this about Flores in August of last year:

Flores started setting fire to opposing pitching, with an 855 OPS at Binghamton (at age 20) and his current reign of terror in Triple-A Las Vegas. He hasn't slugged less than .494 in three years.

Take a look at that batting line in Las Vegas, where he is, give or take, half a decade younger than his competition. Wilmer Flores now has a tidy 162 games played in Triple-A, how statistically convenient! Here's his monstrous batting line: .321/.360/.543 with 28 home runs and 143 RBI. Yeah, 143 RBI in one season's worth of at-bats. And he's actually been hitting better since his last demotion, with a .333/.409/.564 line over his last ten games.

Are you concerned because the Triple-A PCL is a notorious hitter's league? Well I am, so as a general rule I like to compare a player's performance to that of his peers, people playing under the same conditions, to put his performance into context.

If Flores had the ABs to qualify, he'd be 2nd in the PCL in average and 5th in slugging. #FreeWilmer http://t.co/cD2kk60ViV @matthewcerrone

Flores has nothing left to prove in the minor leagues.

If you're reading this, then you already know the excuse used by folks who want to prevent Wilmer Flores from running away with the starting shortstop job in Flushing: His defense. For many years we have heard how Flores was going to have to "eventually move off the position." But is it truly the case that he won't be able to handle shortstop? And if it is, when is "eventually"?

Sometimes, a narrative can run away with you and overtake reality and substance. Rather than speculate based on the copy-and-paste of scouting reports from 2009 and 2010, here's what we actually know about Flores:

Notice I'm not arguing here that Flores is a plus-plus-defensive shortstop. However, he is a professional baseball player who played shortstop his entire life until he was moved off the position in 2012, and he has continued to intermittently play shortstop since then. It's virtually assured, given what we already know, that Wilmer Flores would not be the worst defensive shortstop in baseball right now.

Flores can probably play a passable shortstop, especially in an organization that actually considers—I wish I were joking—Eric Campbell an option as a backup shortstop.

The question, then, is just how bad will Flores be at shortstop, and how bad does he have to be to offset his offensive contributions? Put another way, is Flores's combination of offense and defense better than Ruben Tejada's? We've got an answer.

Flores doesn't have to be a great, or even good, defensive shortstop in order to be better than Ruben Tejada. As long as he's "not bad" the odds are that he will contribute enough offensively to make up the difference. But where is that line?

Luckily, the very smart Astromets (@astromets31) tackled a similar question in May, asking what Flores would have to bat in order to be worth two or three wins above replacement even if his defense was terrible. It's quite a mathy article, so I will summarize its findings here. 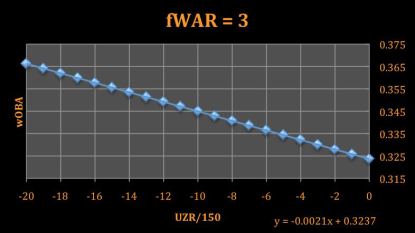 He could hit even less than that if you set the bar at 2 WAR, which would be a more productive season than any Ruben Tejada has ever turned in in his career. If you don't understand or like UZR or WAR, then forget the math for a second, it is just a common-sense proposition: The better his defense, the less he will need to hit.

It is unlikely at this point that Flores is a -15 UZR/150 or worse shortstop, which would make him twice as bad as Hanley Ramirez, who for his career is only -8.8 UZR/150 out there. In fact, as another tall shortstop (Hanley is 6'2", Flores is 6'3") who is a former Top-100 prospect maligned for his defense but praised for his offense, Hanley might be an excellent comparable.

All of the evidence, from scouting to stats, says that Flores will hit in the major leagues. His career batting line in the minor leagues, despite his having being young for each level, is .292/.334/.440, which is weighed down by a bad season he had in Low-A in 2009. Not only has he hit in Triple-A Vegas, but he hit .311/.361/.494 in Double-A Binghamton in a notorious pitcher's league.

You'd have to go back to 2011 in order to find a single season where Flores did not bat .300 or better (he hit .300 over 547 at-bats in 2012, he hit .321 in 463 at-bats last year, and he's batting .323 this year). Even when discounting the inflated statistics in Vegas, Wilmer Flores's batting line looks pretty similar to that of his peers—no player at Vegas has with at least 200 plate appearances has an OPS as high as Flores's.

Wilmer Flores is a top prospect, time to treat him like one

But why approach this and argue from the negative? Why not be aggressive? Only the Mets would take a Top-100 Prospect and focus only on what reports say he might "someday" not be able to do. Flores has crushed the PCL as a 21- and 22-year-old among much older men. He's looked fine on defense at the major league level, and the statistics so far back that up. If given time to play, I expect that Flores can easily surpass his preseason ESPN projections (.267/.309/.400) for the rest of the season. After so many years, this writer is prepared to see what we have in Wilmer Flores.

Unfortunately, it does not look like #FreeWilmer will be happening for the time being:

How long is Wilmer Flores sticking around? "Had [Ruben Tejada] not gotten hit in the head, we wouldn't even be talking about this," TC said.

But I ask the Mets: What is there to lose in letting Flores show what he's got? The organization at times has revived the idea that Flores could play shortstop, with reports indicating that he improved his agility and quickness at the team's winter strength and fitness camp, and he certainly didn't embarrass himself at shortstop the last time he was called up. As a bonus, Ruben Tejada makes a perfect backup in the middle infield and his bat control, his best attribute, makes him a decent option to pinch hit late in a game when you need more than one run.

Will Flores make errors? Sure. Will there be a chance that he can't handle shortstop? Sure. Is there a chance he isn't ready to hit in the major leagues? Sure, even that is possible. But in baseball, like in life, we've got to make the best decisions we can, at any given time, with the data that is available to us. And our data says Wilmer Flores is done hitting .330 in Triple-A and is ready for the Show. It begins today.