Zach Wheeler put in another solid performance as the Mets come from behind to beat the mighty Brewers 3-2 thanks to the Big Lebowski.

For eight innings of Friday night's game against the National League Central leading Brewers, the Mets offense looked as it has for this entire road trip: without energy, without power, and without life. Indeed, the Mets had only scored fifteen runs in their last seven games, and for most of the night it looked like this contest was going to be another depressing ordeal for Mets fans.

The baseball gods, though, had other things in store for the Amazins. And in the top of the ninth inning, having only gotten four hits all night, the Mets jumped in front of the streaking Brewers and evened their record on this road trip to 4-4. 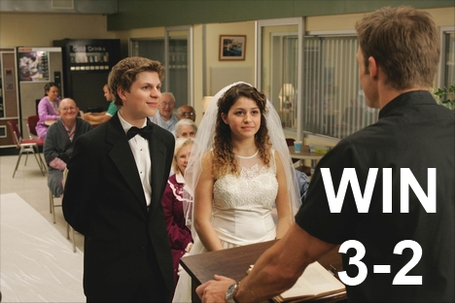 The vast majority of the game was a pitchers' duel between Zack Wheeler and Milwaukee starter Yovani Gallardo. Gallardo three-hit the Mets for most of the night, with two of those hits coming from Daniel Murphy, who is now 8-for-18 against the Gallardo in his career. Other than that, though, Gallardo cruised. He struck out eight and allowed no runs through seven-and-two-thirds innings of work. Gallardo had retired fourteen Mets before Eric Campbell's infield hit in the eighth knocked him out of the game.

As for the Mets side of things, Wheeler performed nearly as well. After a giving up an infield hit to Carlos Gomez and hitting Rickie Weeks with a 96 mile per hour fastball, Wheeler settled down nicely. He struck out Ryan Braun next, got Aramis Ramirez to hit into a fielder's choice, and then got Khris Davis to ground out to short. He breezed through the second and third innings before a changeup got away from him and hit Davis in the fourth. Undeterred, he struck out Lyle Overbay to end the inning without any further hiccups.  In the fifth, he would work around Daniel Murphy's error and got the excitable Carlos Gomez to ground out to third on a nice play by David Wright.

The trouble for the Mets began in the sixth, when, after an eight pitch at-bat, Wheeler issued his first walk of the game to Rickie Weeks. Wheeler then induced a ground ball from Ryan Braun that should have been a double play, but instead managed to sneak through the legs of Daniel Murphy for the All-Star's second error of the night. (No word yet on whether Murph flogged himself in the dugout at the end of the inning.)

Unlike the first error, the Mets would pay for this one, as the speedy Weeks advanced to third on the play. Wheeler then faced Aramis Ramirez. The Georgian threw his entire arsenal all over the strike zone at Ramirez until the Brewers clean-up hitter slapped a ball to short that eliminated Braun but scored Weeks to give the Brewers a 1-0 lead. In response, Wheeler showed incredible maturity and resilience by striking out Khris Davis, and, despite walking Lyle Overbay, got Jean Segura to ground out to third.

The trouble in the following inning would be entirely of Wheeler's own making. After Martin Maldonado grounded out to third, and Yovani Gallardo struck out looking, the  Mets starter faced Carlos Gomez. Gomez took the first pitch he saw, smacked it just over the wall in right-centerfield, and performed his obligatory chest pounding celebration as he rounded the bases, to the chagrin of Mets fans (and anyone with taste) everywhere. Next up, Rickie Weeks would almost make it back-to-back solo homers, but his hit managed to stay in the park for a double. Wheeler's night was finished, though, and while Vic Black would get Ryan Braun to fly out to Juan Lagares, it looked as if Wheeler would get stuck with the tough-luck loss.

The Mets had a shot to tie it in the eighth on the aforementioned two-out hit from Campbell that knocked Gallardo out of the game. With Curtis Granderson due up, Ron Roenicke called in lefty Will Smith to get the final out. The Fresh Prince did just that, striking out the slumping right-fielder on four pitches and ending the threat.

After Carlos Torres came in the eighth and held the Brewers at two, Daniel Murphy led off the ninth inning against former Mets closer Francisco Rodriguez. Perhaps it was the sight of an old friend, or perhaps Murph's desire for redemption spiritually guided his bat to contact, or perhaps it was just old-fashioned Mets magic, but Murph doubled to left for his third hit of the night. Captain Wright promptly drove Murph in, muscling a single into left field to cut the Brewers' lead in half. Lucas Duda now lumbered to the plate. The first baseman jumped on the first pitch he saw, smacking a home run that put the Mets on top 3-2, and most likely dented the wall beyond the right-center-field fence at Miller Park.

Jenrry Meija would have his work cut out for him in the ninth, though. Roenicke sent up Brewers messiah Jonathan Lucroy to pinch hit for Maldonado, and Meija walked him to put the tying run at first with no outs. Luckily, Logan Schafer came up to bunt Lucroy over to second and failed miserably.  Meija struck him out, partially to record an out and partially to put the poor boy out of his misery. This brought the histrionic Gomez back up, but sadly for Brewers fans, lighting failed to strike twice, and Gomez struck out swinging on an 87 mph slider from Meija. Meija then struck out Weeks to end the game and earn his fourteenth save of the year.

Murphy redeemed, K-Rod defeated, Mets victorious. We should do this more often. 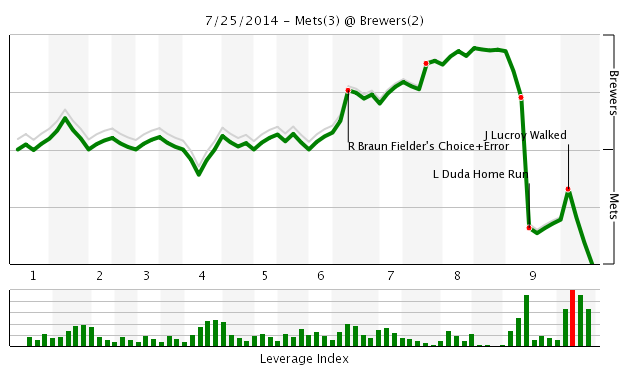