Jonathon Niese, making just his second start since Independence Day, was back on the bump and looking to rebound from his previous shaky outing in Seattle. Unfortunately for Jon, he was unable to do so, as the Mets lost in Milwaukee by a score of 5-2. With just five days remaining until the July 31 non-waiver trade deadline, this loss puts the Mets' record at 49-55. This long road trip was said to have a huge causal effect on whether Sandy Alderson would determine his club to be buyers or sellers and at 4-5 the jury is still out. The Mets will now look to even the series tomorrow afternoon and head back to New York Sunday night with a .500 road trip. 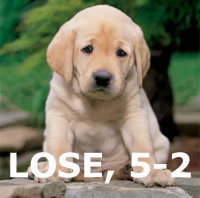 In an effort to shake up a slumping lineup, Terry Collins pulled a Tony La Russa, again, by batting the pitcher eighth in order that the speedy Eric Young would bat in front of the leadoff man. Much has been written about this tactic, and whether you like it or not, it did little to change Terry's offensively challenged group. Juan Lagares did not get a hit last night so, of course, he was back on the bench tonight. The lineup has been extraordinarily quiet in the second half and this game marks the eighth straight game of scoring three runs or fewer. Whether the bulk of the blame belongs to Collins, Alderson, or the players makes for an engaging and passionate conversation, but the fact remains, this is not a good offensive ball club at the moment.

Niese came out with his typical bulldog mentality in the first and looked extremely determined to rebound from his last poor outing in Seattle. He had command of all his pitches early and was able to generate a lot of swinging strikes and ground balls throughout the first four innings. In the fifth inning, however, the wheels fell off, and he gave up three frustrating runs. He probably deserved better given the stuff he possessed tonight, but Milwaukee is leading the NL Central for good reason, and he ran into trouble against their potent lineup his third time through.

Brewers starter Wily Peralta, for his part, struggled with his command all night and labored through nearly each inning he was on the mound for. Luckily for him, the Mets were unable to put together a big inning or string any hits together whatsoever and he was tagged for just two runs in his five and two thirds innings. He did not have his best stuff by any stretch of the imagination, and if he was up against a tougher offensive force he may have gotten shelled. But, as they say, it was not meant to be.

The first two innings went by without so much as a whimper, but the Mets were able to get the scoring started with a run in the top of the third. Curtis Granderson led off the inning by roping a double over the head of Carlos Gomez to dead center. Daniel Murphy then grounded out productively to second base, allowing Granderson to scamper over to third. David Wright then walked, Peralta's third of the game already at this point, which brought up the white-hot Lucas Duda. Peralta was almost consumed with Wright's presence on first base—he did steal a bag back in the first—and threw over numerous times during the Dude's at-bat. The big hurler should have probably been more concerned with the opposing batter than the runner on first, though. Duda was given the green light on 3-1, and lined an RBI single to center.

With Travis d'Arnaud up, Peralta's command troubles continued, and he threw a wild pitch that allowed Duda and Wright to advance to second and third, respectively. d'Arnaud was unable to make Peralta pay, however and could not plate the runner from third with one out and flew the ball weakly to shallow right field. Chris Young was up next and—stop me if you've heard this before—did not deliver, grounding out to second to end the inning.

The Mets had to wait until the fifth inning to deal their next blow while Niese was mowing down the Brewers in the early stages of the game. Granderson led off the inning with a line drive home run to the right field corner near the foul pole that just snuck out of Miller Park. It was a refreshing sight to see Grandy not only get a hit in a baseball game, but to hit the ball with some power. The home run was his 15th on the year as he continues to try and live up to his large offseason contract. Murphy quickly followed up with a single, but the hopes of a big offensive inning were quickly put to bed as Wright grounded into a double play and Duda flied out to right.

In the bottom of the fifth, the Brewers responded immediately and were able to plate a trio of runs. With Juan Lagares on the bench, Chris Young was unable to get to a shallow fly ball from Mark Reynolds that fell in for a leadoff single. It would have been a routine play for Lagares, but he could not make the play from his spot on the bench. Jean Segura then hit a sharp ground ball to Murph, who came up with a magnificent play lunging for the ball and throwing out the lead runner at second. On the turn by Wilmer Flores, Segura just narrowly avoided hitting into the double play by legging it out on a close call at first. With the pitcher up and trying to bunt, Segura caught Niese a little sleepy and took off for second, successfully stealing the base. Segura then tagged on a fly ball to right, moving to third base with two outs and Gomez at the plate.

Niese then shot himself in the foot by throwing a wild pitch that d'Arnaud was unable to block and Segura alertly jogged home, scoring easily. Gomez, who struck out badly in his first two at-bats against Niese, hit a sharp ground ball single that set the table for Jonathan Lucroy to hit a two-out double to the deepest part of the park in right center. Niese badly missed his spot and was lucky that the ball stayed in the park. The speedy Gomez came home all the way from first to tie the game at two.

The hits kept on coming, and Braun followed up with an RBI single. Niese finally got out of the inning by getting Aramis Ramirez to fly out to center. Niese was in complete cruise control leading up to the fifth inning and was visibly frustrated by the results,his body language deteriorating while these runs crossed the plate.

The top of the sixth inning saw the managers engage in their first battle of wits on the night. Chris Young hit a one-out double, bringing up the owner of a brand-new right-wrist tattoo, Wilmer Flores, who advanced the runner by grounding out to second. With the Mets down a run and Niese due up hitting eighth, Terry Collins elected to pinch hit for him with Bobby Abreu. Niese made no attempt to hide his feelings about this decision and smashed his bat against the dugout tunnel wall several times.

With a lefty due up and Peralta throwing the ball all over the place and sporting a high pitch count to boot, lefty Zach Duke came in from the bullpen. Abreu was subsequently switched out for the right-handed Eric Campbell with the tying run on third. Despite the matchup seemingly favoring the righty Campbell, he struck out to end the inning.

After the chorizo won the sausage race in the middle of the sixth, Carlos Torres took over on the mound as he looked to keep within a run. He failed, however, and after nearly giving up a home run to Khris Davis, which was caught by Granderson on the warning track, Mark Reynolds took him deep with a mammoth home run to center to give the Brewers a two-run lead.

Terry Collins wanted to get some length out of Carlos Torres in an effort to preserve his bullpen, and left him in through the eighth inning. It might have been an inning too long, as Torres allowed yet another run in the form of an RBI double to Khris Davis. Davis advanced to third on the throw home and nearly scored another run. Reynolds, the next batter, grounded to Wright, who threw to first for an apparent out, but the first base umpire ruled that Duda came off the bag and Reynolds was called safe. Collins quickly jogged out from the dugout to challenge the play and the ruling was overturned, thus ending the inning.

The Mets' offense was simply punchless and was unable to repeat last night's late-inning heroics. Duke and Jeremy Jeffress provided the seventh-inning bridge to their potent eighth-and-ninth-inning combo of Will Smith and Francisco Rodriguez. The Brewers' bullpen was responsible for ten total outs—eight via the strikeout—as the Mets went quietly into the night. 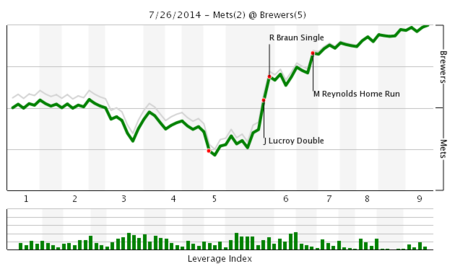