Jacob deGrom was terrific and the Mets offense pounded Braves pitching as the Mets won their third game in a row.

If not for some late shenanigans by the bullpen, tonight's Mets 8-3 win would probably have been the most all-around satisfying of the season. Jacob deGrom tossed a gem and the Mets offense pounded the Braves' best starting pitcher and two relief pitchers. Even considering the three meaningless runs the bullpen coughed up, this game was pretty darn fun to watch. 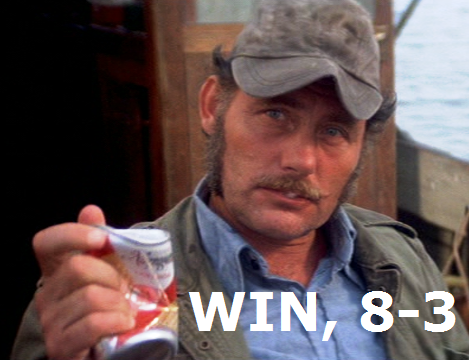 deGrom threw seven shutout innings, striking out 11 while walking none. He allowed seven hits, all singles, but only once gave up multiple hits in an inning. The Braves struggled against deGrom's varied offerings, swinging-and-missing at 20 of his 108 pitches. That's good for a 19% swinging-strike rate, far better than the league-average 9% rate. deGrom topped out at 97 mph and seemed to have something extra on his fastball. Put it all together and it was the best start of his young career, both according to Game Score and my untrained scouting eye. Not bad for a guy who started last season at Single-A St. Lucie.

On any other night, the Mets' offense, and not deGrom, would have been the big story. Mets batters scored eight runs, mashing 18 hits against Braves pitching. Braves starter Julio Teheran, he of the 2.29 ERA this season, was knocked out after 3.1 innings. The first seven batters in the Mets lineup all had at least two hits and even deGrom, batting eighth, hit a single and scored a run. Nine batter Eric Young Jr. also had a hit, and everyone in the Mets starting lineup tallied at least one hit by the third inning.

The big blows were a Curtis Granderson leadoff home run in the first inning and a Daniel Murphy two-run double in the second inning. That's Granderson's second home run in as many games and his fourth in his last eight games. Murphy celebrated his All-Star selection by hitting two doubles, raising his OPS to a fine .759. Extend him, please.

David Wright added an RBI single in the second inning, increasing the Mets' lead to 4-0, and Young singled home Travis d'Arnaud to make it 5-0 in the third inning. Lucas Duda, Kirk Nieuwenhuis, and Juan Lagares contributed RBI base hits in the sixth, seventh, and eighth innings, respectively, to close the Mets' account.

Duda continued to rake against right-handed pitching, going 3-for-3 with two doubles and two walks. His season numbers keep creeping upward and he is now among the best five or six hitting first basemen in the National League. Get him out of the outfield and watch his value soar.

Buddy Carlyle, Dana Eveland, and Jeurys Familia farted around in the eighth and ninth innings, and were unable to preserve the shutout. They combined to give up three runs on six hits. Familia struck out Justin Upton with runners on second and third to end the game.

The Mets are now 41-49 but their run differential is +3. Maybe better times are ahead. Game three of the Mets-Braves series is Wednesday at 7:10 pm ET. The pitching matchup is Dillon Gee vs Ervin Santana. Welcome back, Dillon! 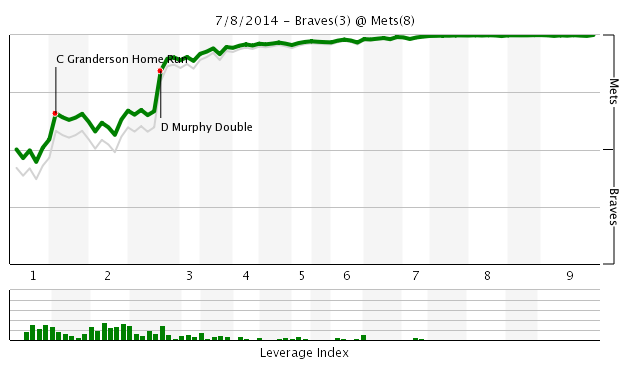