Mets Morning News: Huge trade deadline for MLB, not so much for the Mets

Share All sharing options for: Mets Morning News: Huge trade deadline for MLB, not so much for the Mets

It was an active day around MLB at the trade deadline, but not for the Mets. Sandy Alderson and co. were silent, choosing to hold on to potential trade pieces like Bartolo Colon and Daniel Murphy (for now). They also did not part with prospects to acquire established big-league talent like Troy Tulowitzki or Carlos Gonzalez. Alderson explained the rationale in an interview transcribed by Adam Rubin, which can be summed up by this Alderson quote:

"...in actually acquiring other players as opposed to 'selling our own,' it always came back to our handful of top prospects. And we just aren't ready to move any of them at the moment."

Seems reasonable, although a lack of trades before the waiver trade deadline or this offseason would be disappointing. A poll at Rubin's blog shows that Mets fans are basically split on how they feel: 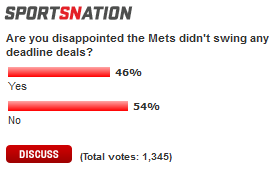 Matt Cerrone of MetsBlog is disappointed that the Mets weren't able to make a deal.

The Mets were off on Thursday and spent the day basking in the glory of the 11-2 smackdown they laid upon the Phillies on Wednesday. Our heroes begin a four-game series against the Giants at Citi Field tonight. The game times and pitching matchups are as follows:

The Giants are 58-50 and currently hold one of two Wild Card spots in the National League, but they've scuffled a bit lately, losing six out of their last seven games.

Remember the guy in the video Matt Harvey did for Jimmy Fallon last year who said Lucas Duda was his favorite player? (Click here to watch that point in the video) That guy must be loving life right now, the way Duda is mashing. (Hat tip to Reddit)

Clayton Kershaw dominated the Braves and the Dodgers won 2-1.

The Phillies crushed the Nationals 10-4 but it was a Pyrrhic victory, as Cliff Lee left the game in the third inning with an arm injury and was later placed on the disabled list.

Here are the current NL East standings (via ESPN.com):

MLB Daily Dish recapped every trade deadline deal. Here are some of the big ones:

Austin Jackson was removed in the middle of the 7th inning of the Tigers-White Sox game after his trade to the Mariners was completed. Tigers fans gave him a standing ovation; click here to watch video of the moment.

Albert Pujols' RBI single in the top of the 13th inning gave the Angels a 1-0 victory over the Orioles.

Eric Hosmer has a stress fracture in his hand and might miss a month, reports Andy McCullough.

Once, writers on A's bus recalled where they were for famous HRs. For Joe Carter, voice from back said, "I was on 2nd base." It was Rickey.

Nate Gismot asked "so what?" to the Mets standing pat at the deadline. So what? So let's dance!

Kevin Cassidy argued in favor of keeping Daniel Murphy. He makes a strong case and I agree.