The Mets failed to protect a five run lead, and Ryan Howard hit a walk-off single in the bottom of the ninth to give the Phillies a 7-6 win.

Share All sharing options for: Mets vs. Phillies Recap: Bullpen blows it

It is widely known that the Phillies are on the way down. The glory days of Roy Oswalt, Cliff Lee, and Roy Halladay manning their starting rotation are long gone. Jimmy Rollins is old, Chase Utley is declining, and Ryan Howard is barely hitting above the Mendoza line. Their time has passed.

I would love to say I pity Phillies fans, that I can be the bigger man and not relish in watching their slow descent into irrelevance. But I can't.

I will never forget 2007 or 2008, and so I adore it when the Mets beat Philadelphia. And that makes games like today's all the more infuriating, when the Mets blew a five-run lead and allowed their declining opponents to win. 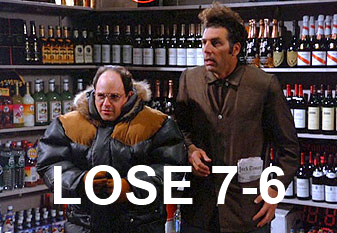 Things started off well enough for the Mets. Curtis Granderson began the game by hitting a rocket of a ground ball that skirted through the legs of Ryan Howard. Daniel Murphy grounded out to first base, and Granderson advanced to second. David Wright then extended his hitting streak to nine games with a base hit right up the middle which drove in Granderson and put the Mets on top 1-0. After Lucas Duda flew out to left and Travis d’Arnaud walked, Kendrick got birthday boy Matt den Dekker—making his first start since returning from the minors—to ground out to Howard to end the inning.

The Phillies scored their first run off of Zack Wheeler in the home half of the first inning on a two out solo homer by Chase Ultey. Other than that though, the Phillies got nothing more against Wheeler until the sixth inning, despite the Mets righty not having his best command for the second straight start.

Meanwhile, the Mets got to Kendrick again in the second when Daniel Murphy lifted a sacrifice fly to right center that scored Juan Lagares. In the third, Lagares was involved in the Mets scoring again, this time by smacking a two run triple that drove in Wright and Travis d'Arnaud. While Kendrick got through the fourth without allowing any runs, Duda and d'Arnaud led off the fifth with back-to-back homers that put the Mets up 6-1. Kendrick got the next three Mets in order, but his start was over after five innings, and the Mets were sitting pretty with a five run lead.

In the bottom of the sixth though, Wheeler started to fall apart. After thirteen pitches, he got Jimmy Rollins to pop out to Daniel Murphy. The at-bat clearly tired him, as the Mets starter then coughed up a single to Utley, and, following a Ryan Howard fly ball out to deep left, issued a walk to Grady Sizemore. Domonic Brown then drove in the Phillies second and third runs of the day with a double to right. Though Wheeler got Wil Nieves to hit a soft comebacker to end the inning, the Georgian's hot and cold day was done, as was his streak of seven straight starts allowing two earned runs or less.

The Mets did nothing offensively against Phillies reliever Mario Hollands in the sixth or seventh, and Vic Black came on for the Amazins in the home half of the latter inning to hold the Mets lead. After setting down the first two batters he faced, Ben Revere hit a groundball up the middle that Wilmer Flores misplayed to keep the Phillies alive. The official scoring was a base hit, but Flores failed to get his feet in a good position to make the throw and pulled Lucas Duda off the bag. Though Flores has looked rough at shortstop over the course of these last couple games, this most recent failure proved especially costly, as Jimmy Rollins followed with a single to left , and Chase Utley then tripled to drive in Revere and Rollins. Black got pulled after this, and Josh Edgin came on to face Ryan Howard. The Mets reliever struck out the Phillies first baseman, stranding Utley at third to protect the Mets one run lead.

New Phillies pitcher Jake Diekman set the Mets down 1-2-3 in the eighth, and Terry sent Edgin back out for the home half of the inning. The former Buckeye performed brilliantly again, striking out the side and keeping the Mets in front. However, the Mets offense again went down in order in the top of the ninth, this time against Ken Giles.

Jenrry Meija came on for the save situation in the bottom half of the inning, and Cody Asche welcomed the Mets closer with a leadoff double that put the tying run in scoring position for pinch hitter Marlon Byrd. Byrd took the third pitch he saw and smacked it into center for an RBI single, and suddenly, the Mets were tied with no outs and a runner on first. Meija then struck out Revere and got Jimmy Rollins  to fly out to Granderson, bringing Chase Utley up with two outs. On a 2-2 pitch, Byrd stole his third base of the year, putting the winning run in scoring position with the count now at 3-2 on Utley. The Mets closer then intentionally walked the Phillies second baseman, bringing .218 hitter Ryan Howard to the plate. The count was full when Howard pulled a line drive into right that scored Byrd and left Mets fans everywhere shaking their heads.

Tomorrow the Mets will try to take the series and reclaim some of their honor with Jonathan Niese facing David Buchanan at 1:05 EDT. 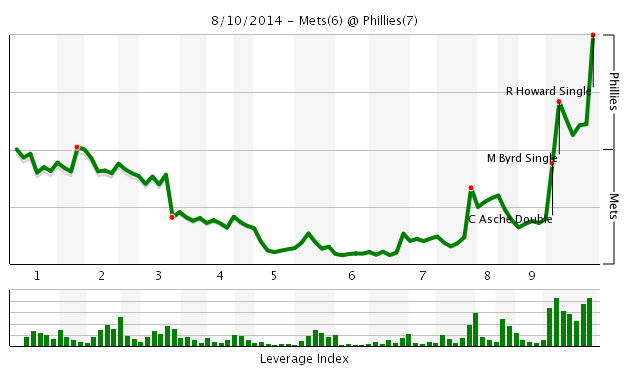