Zack Wheeler could be great if he improves his changeup

The young right-handed pitcher has been good lately, but he could be even better if his changeup becomes more effective.

Share All sharing options for: Zack Wheeler could be great if he improves his changeup

There are things that New York Mets fans should look out for the rest of this season: Juan Lagares proving he can hit enough to be an everyday center fielder, Wilmer Flores getting the chance to be in the lineup consistently, and the Wilpons miraculously winning the lottery. None of those—except perhaps the lottery—is as important as the continued progress of Zack Wheeler and, specifically, the development of his changeup.

While there are legitimate concerns about Wheeler as a pitcher, he has continued to prove that his raw stuff will allow him to succeed as a starting pitcher in the long term. Wheeler would benefit from improved fastball command, but his fastball-breaking ball combination is deadly, even when he doesn’t have a clue where either pitch is going. He has been tremendous lately, pitching deeper into games and limiting the opposition even when he doesn’t have his best stuff.

Wheeler 'close to untouchable' in trade

The Mets are incredibly unlikely to deal Zack Wheeler to another team.

There was reason to believe Wheeler would get better, even after he got off to a slow start this year.

That said, Wheeler won’t become an elite starter like Matt Harvey or Adam Wainwright until he develops his changeup to the point where it is a much more usable pitch. Right now, Wheeler doesn’t have a weapon in his arsenal that lets him neutralize left-handed hitters.

In reality, Wheeler’s array of pitches look like those of a reliever. His fastball and curveball are nasty enough that they will allow him to succeed as a starter, but he currently doesn’t have a pitch that he can show to left-handed hitters to keep them off balance consistently.

Wheeler has been very effective against right-handed hitters this season, as they have hit a meager .207/.283/.304against him. Left-handed hitters, however, have hit .283/.374/.425. Lefties also have a .351 batting average on balls in play against him, while righties have hit .265 on balls in play. That could be interpreted as lefties having better luck, but it could also indicate that they are making better contact against him. 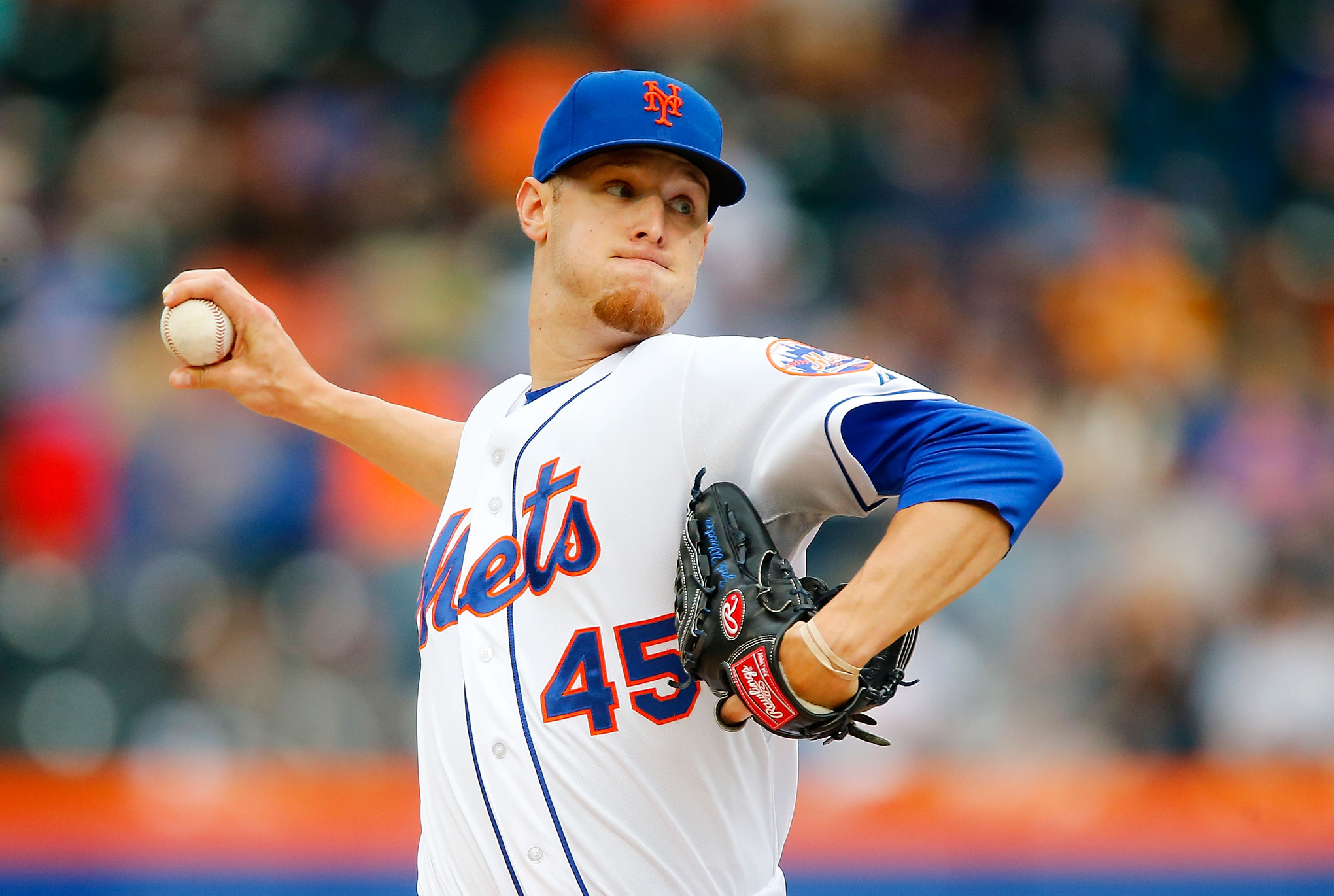 Wheeler currently has a changeup that he mixes into most games, but he barely uses it relative to his other pitches. Via Brooks Baseball, Wheeler has relied far more on his fastball than his offspeed offerings, and he rarely uses his changeup. Right now, the pitch has the role of a "show-me" pitch to let the batter know it could be coming, but it lags behind his other pitches in terms of effectiveness.

The lack of development with his changeup is supported by Fangraphs’ PITCHf/x pitch values, where a score of zero is considered average, a negative score below average, and a positive score above average. Last season, the ineffectiveness of Wheeler’s curveball—which was assigned a pitch value of -3.6—was a major concern. But this season it has improved significantly and increased to 1.2.

Wheeler’s changeup has made no strides, as it was valued at -0.2 last season and -1.9 this season. Pitch values are far from perfect, but in this case they support what is clearly evident from watching Wheeler pitch.

Along with the fact that Wheeler’s changeup isn’t a great pitch, he also struggles to throw it for strikes, evidenced by the chart below from Brooks Baseball. 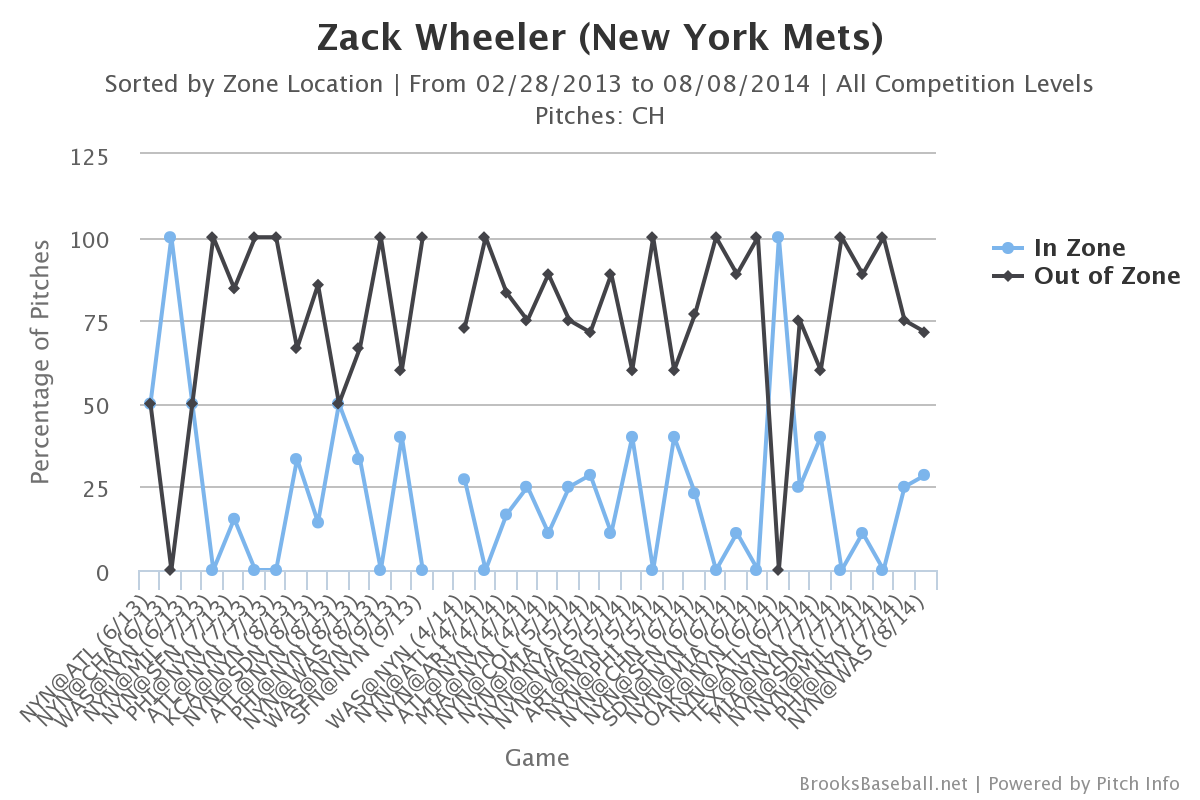 Wheeler has been lucky to throw his changeup for strikes at a 25 percent rate. As long as he can’t do that consistently, he is handicapped to the point where the pitch becomes unusable when he is behind in the count. That is acceptable against right-handed hitters who he can still fool with his breaking ball, but left-handers, who can pick up breaking balls much better against right-handed pitchers, can sit on fastballs to drive and spit on any breaking stuff as long as they are ahead in the count.

On the upside, Wheeler has made some noticeable strides with the pitch recently. The chart below shows how often opposing hitters have swung at the pitch inside and outside of the strike zone. 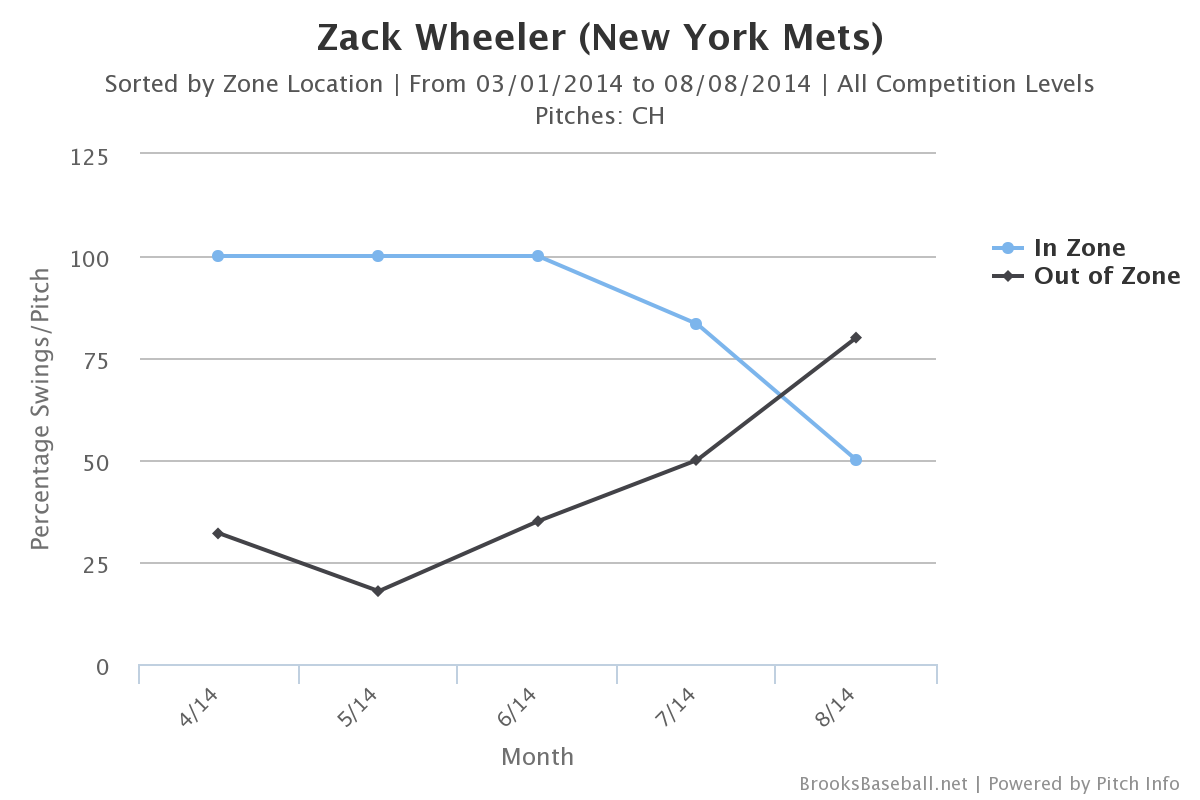 Until June, opposing hitters swung at every single changeup Wheeler threw in the strike zone. While it is still possible that the pitch was effective and got the hitter out in front, this indicates that most of the changeups were in the middle of the plate, giving the hitters no reason to lay off the pitch. At the same time, hitters were unlikely to chase the offering early in the season, barely swinging at it outside the zone. Since June 14, though, hitters have swung at changeups in the strike zone less often and those outside the strike zone more often.

There is still a lot to love about Wheeler as a pitcher. It is a very good sign for his future that he has been able to succeed as he has despite his lack of effectiveness against left-handed hitters. If his changeup remains a below-average offering, Wheeler might not reach his ceiling.

It’s tough for a major league pitcher to make strides with a pitch in the big leagues, but Wheeler clearly isn’t going back to the minors now. With any luck, he will improve his changeup over the offseason and in spring training next year. If he does, the Mets’ rotation looks all the more impressive heading into next season.