Jon Niese won his first game since returning from the disabled list, and Matt den Dekker and Anthony Recker drove in four runs in the seventh to give the Mets a 5-3 victory in Philly.

Coming off a painful loss on Sunday afternoon in Philadelphia, the Mets were able to rebound in the series finale there today. While the Mets' playoff hopes may be nothing more than a pipe dream, the team came back to Citizens Bank Park today to beat the Phillies 5-3 to win the series and return home on a high note. 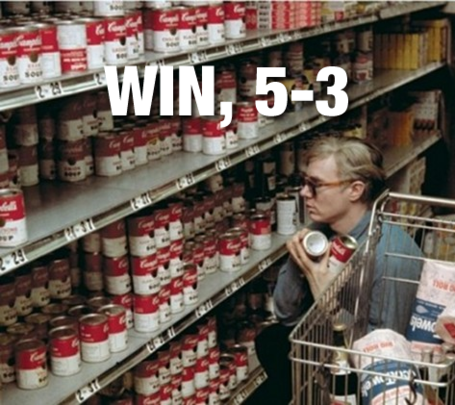 Today's contest started off quietly enough as Phillies starter Dan Buchanan and Mets starter Jon Niese both had 1-2-3 innings in the first. In the second, Niese had a slight hiccup, as he issued a four-pitch walk to Darin Ruf with two outs in the inning. Andres Blanco then smacked a double into left that sailed over the glove of a leaping Matt den Dekker, which advanced Ruf to third base. But Niese induced a groundout to second from Cody Asche to end the inning.

The Mets went down without any noise in the second and third, but in the fourth, Daniel Murphy led off with a double to the left field corner. David Wright then drove him in with a single that extended his hitting streak to ten games and put the Mets up 1-0. Wright got stranded at first, though, as Buchanan then struck out Lucas Duda and Juan Lagares. Andres Blanco then robbed den Dekker of a base hit to put the bats back in the Phillies hands.

Niese's only glaring mistake came in the bottom half of the fourth, when after a Ryan Howard ground out, he walked Carlos Ruiz to bring up Darin Ruf. Ruf took a 2-0 pitch from Niese and placed it over the center field wall to put the Phillies on top 2-1. Niese kept his composure, however, and got Andres Blanco to ground out to Wright and then struck out Cody Asche to end the inning.

In the bottom of the fifth, Niese ran into trouble again by issuing a walk to Buchanan to begin the inning. David Wright, perhaps sensing his pitcher needed to calm down, went over and spoke to Niese for a few seconds. Whatever the captain said worked, as Niese then induced a ground ball to Murphy that turned into a 4-6-3 double play, and followed that up by getting Jimmy Rollins to hit a comebacker to get out of the inning. Niese endured a few more bumps as the game went on, but unlike his last few starts, he managed to recover from them all and keep the Mets in the game.

The Mets' offense finally broke through against Dan Buchanan in the seventh. The Phillies starter walked Lagares to leadoff the inning, which should have been a big, glaring sign to Ryne Sandberg that something was amiss in the universe, as Lagares has only walked thirteen times all year. Matt den Dekker came up after Lagares and smacked an RBI double into right field to tie the game at two and knock Buchanan out of the game.

Justin De Fratus—who hadn’t allowed an earned run since a July 26 appearance versus the Diamondbacks—came on for the Phils and promptly gave up a bloop single to Wilmer Flores, bringing Anthony Recker to the plate. Recker ended De Fratus's scoreless streak with his fourth home run of the year, a three-run dinger that put the Mets up 5-2.

The Phillies threatened against Niese in the home half of the seventh. After Andres Blanco and Cody Asche both flew out to Juan Lagares for the first two outs of the inning, Sandberg sent pinch hitter Domonic Brown up to the plate. Brown swung at the first pitch he saw, and smacked it over the head of Curtis Granderson for a double. Ben Revere then singled to center, and for a split-second, it looked like another Phillies rally was in the making. Thankfully, Juan Lagares refused to allow it to materialize. When Brown rounded third to try to score on Revere's single, Lagares fired a throw to Anthony Recker, who then laid the tag on Brown to end the inning and squash the Phillies' hopes.

Antonio Bastardo and Cesar Jimenez then held the Mets scoreless in the eighth and ninth innings, respectively, while Buddy Carlyle and Jeurys Familia pitched a scoreless eighth for the Mets. Familia took the mound again for the Mets in the ninth inning to try to earn a four-out save. And that's when it got a little exciting.

Familia struck out pinch hitter Grady Sizemore, and induced a groundout to Lucas Duda off the bat of Andres Blanco. He then walked Cody Asche, and Ryne Sandberg then sent Chase Utley, who got the day off today against the lefty Niese, in to pinch hit. Utley made his only at-bat count, and very nearly hit a homer that would have cut the Mets lead down to one run. After a review, however, it was determined that a fan interfered with the ball, and Utley returned to second base with an RBI to make the score 5-3. Thankfully, he went no further than that, as Ben Revere flew out to Juan Lagares to end the game and give the Mets a win.

The Mets are scheduled to begin a three-game series at home at 7:10 PM EDT on Tuesday night, weather permitting. 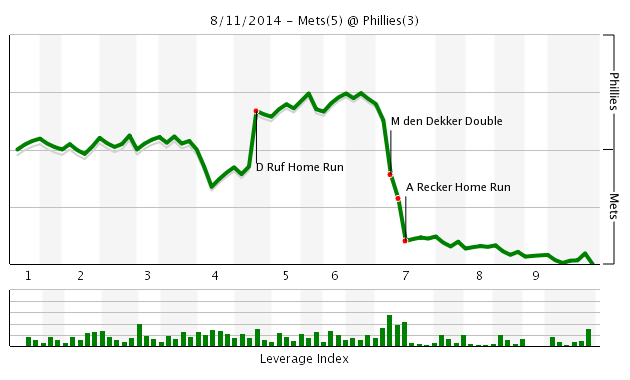