Jacob deGrom was a nice pitcher in the minors, but nobody saw this coming.

Share All sharing options for: Trying to make sense of Jacob deGrom's breakout season with the Mets

Jacob deGrom has become one of the Mets’ best starters this year, now often mentioned in the same breath as other young pitching studs like Matt Harvey, Zack Wheeler, and Noah Syndergaard. After a mediocre—if not somewhat rocky—first month, deGrom has performed as one of the best pitchers in baseball. His tremendous performance has been mostly unforeseen, with many predicting his ceiling to be perhaps a number-three-or-four starter. Although deGrom is now unfortunately shelved with a shoulder injury, it would still be interesting to see what has perhaps led to his excellent pitching and to see if he can continue to be great, injury aside.

We can split deGrom’s season into two periods: one beginning with his June 21 start against the Marlins, and one covering all starts before that game. Let’s take a look at how he’s performed during these two periods:

That’s an impressive across-the-board improvement there. With an improved strikeout-to-walk profile, a higher ground ball rate, and a higher whiff rate, it’s natural to expect that deGrom would achieve better results. The next step is to see how much of this improvement can be explained by tangible changes deGrom has made versus luck or some other factor outside his control.

deGrom's slider and curveball have changed

I took a look at a few PITCHf/x charts and noticed some differences in deGrom’s slider and curveball during these two time periods. Here are a few that stood out: 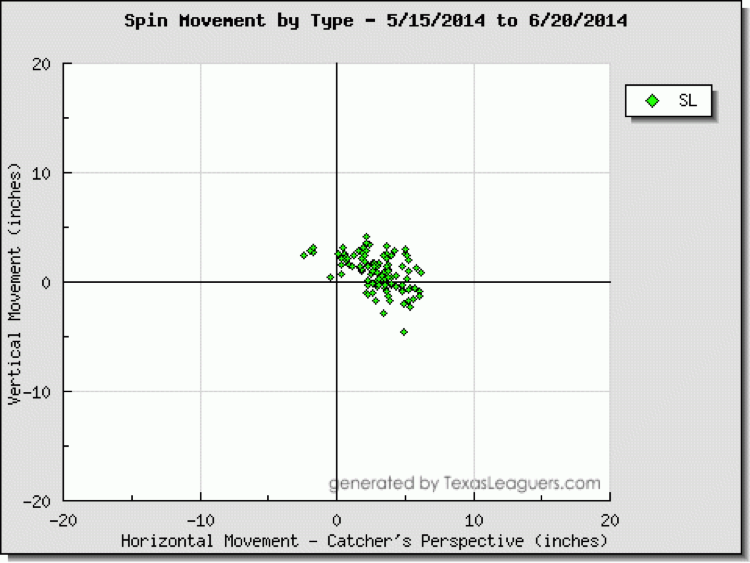 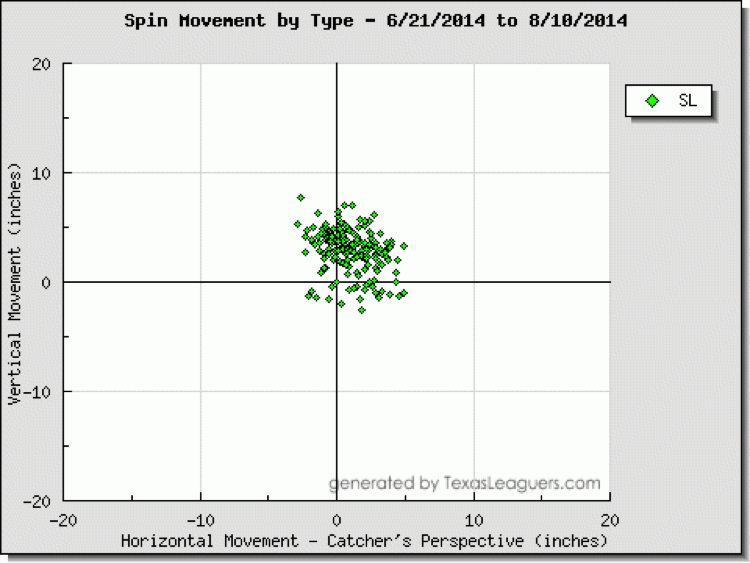 You can see that the deGrom’s slider has both different vertical and horizontal movement. In the most recent time period, it has actually less vertical movement but is breaking more towards the left side of the plate (into a left-handed hitter), from deGrom’s perspective. Now for his curveball: 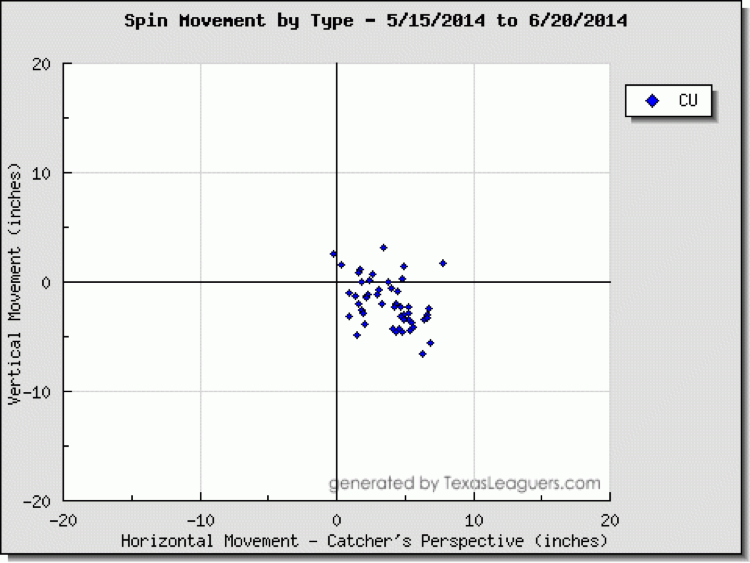 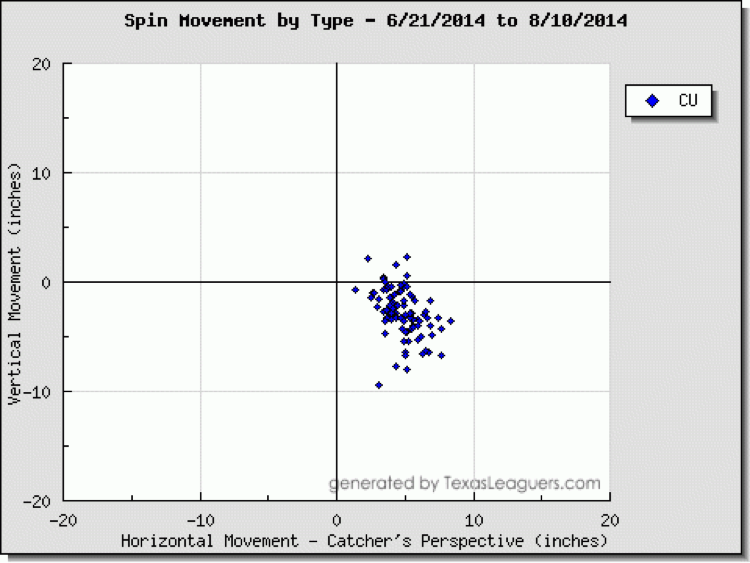 Not included for the sake of brevity are charts that show his curveball release point has also slightly changed as well. In these charts, we can see the curveball exhibiting the opposite change of his slider with respect to horizontal movement—it is now breaking away more towards the right side of the plate (into a right-handed hitter), from deGrom’s perspective.

Here’s how opponents have hit these pitches to different results:

It actually seems like deGrom was getting these pitches absolutely hammered in his early starts—those numbers are much higher than league averages for these two pitch types. Regardless, the point here is that deGrom’s slider and curveball have changed, and his results are reflecting those changes.

deGrom is getting more whiffs on his four-seam fastball 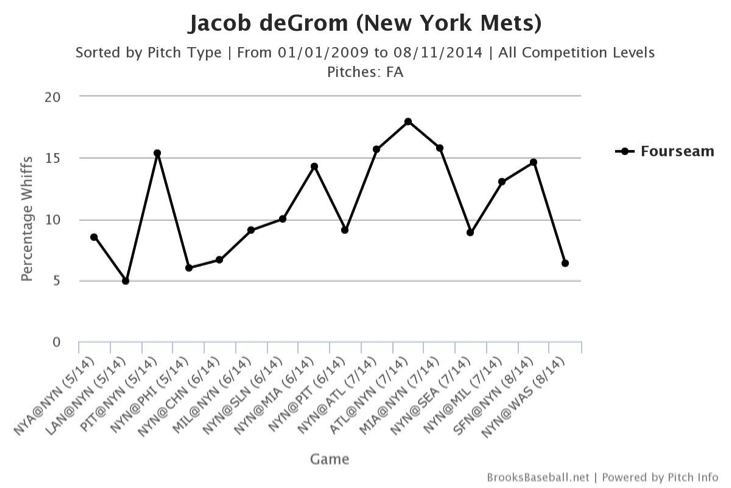 Batters are whiffing more on his four-seam fastball—it’s that simple. Except that it’s not, since every chart has indicated there has been no significant change to this pitch. Do notice that two of deGrom’s starts with high whiff rates came against the strikeout-happy Braves, so this may be a matter of facing the right opponent.

I’m also going to leave this chart here, which shows a noticeably increased fastball velocity for three starts, and that’s it. I don’t know what conclusions to draw from this. 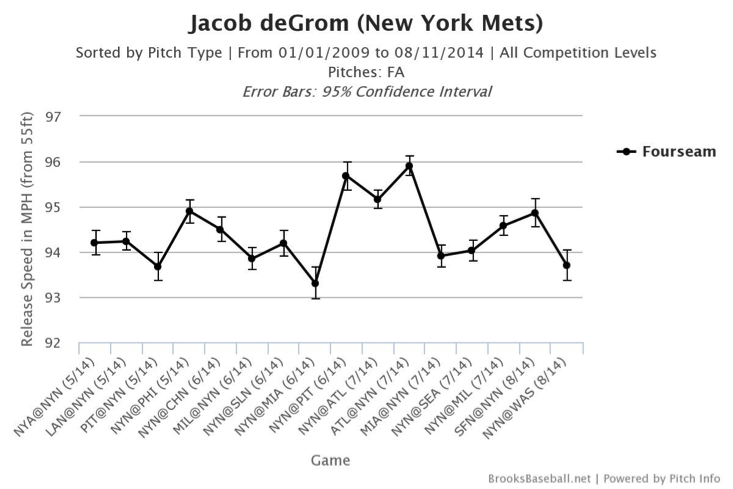 I’ve looked at a variety of factors beyond the graphs here—the ones I’ve shown are just the ones that really mean anything—and have reached no definitive conclusions about deGrom. A few noticeable insights here are that his slider and curveball have improved and that his fastball is inducing more whiffs, possibly due to luck. It might also be because of better selection or because of his improved off-speed pitches. There’s a lot going on with deGrom, some of which seems to be noise, and some of which seems to comprise be real and tangible changes.

I could lazily dump a conclusion that his slider and curveball are driving his results. Look at the changes in movement, higher ground ball rate against the curveball; perhaps they’re keeping hitters off-balance against the fastball. The real answer, though, is that this is probably only part of the picture, and I can’t paint the rest myself. Maybe deGrom has been lucky and he really is a mediocre starter. Maybe deGrom is actually the best pitcher in baseball. I don’t know.

Instead, let’s have a nice picture of deGrom and his hair and enjoy him when he’s back from the DL. Feel free to share your own analyses and pet theories on why deGrom has been so successful this year. 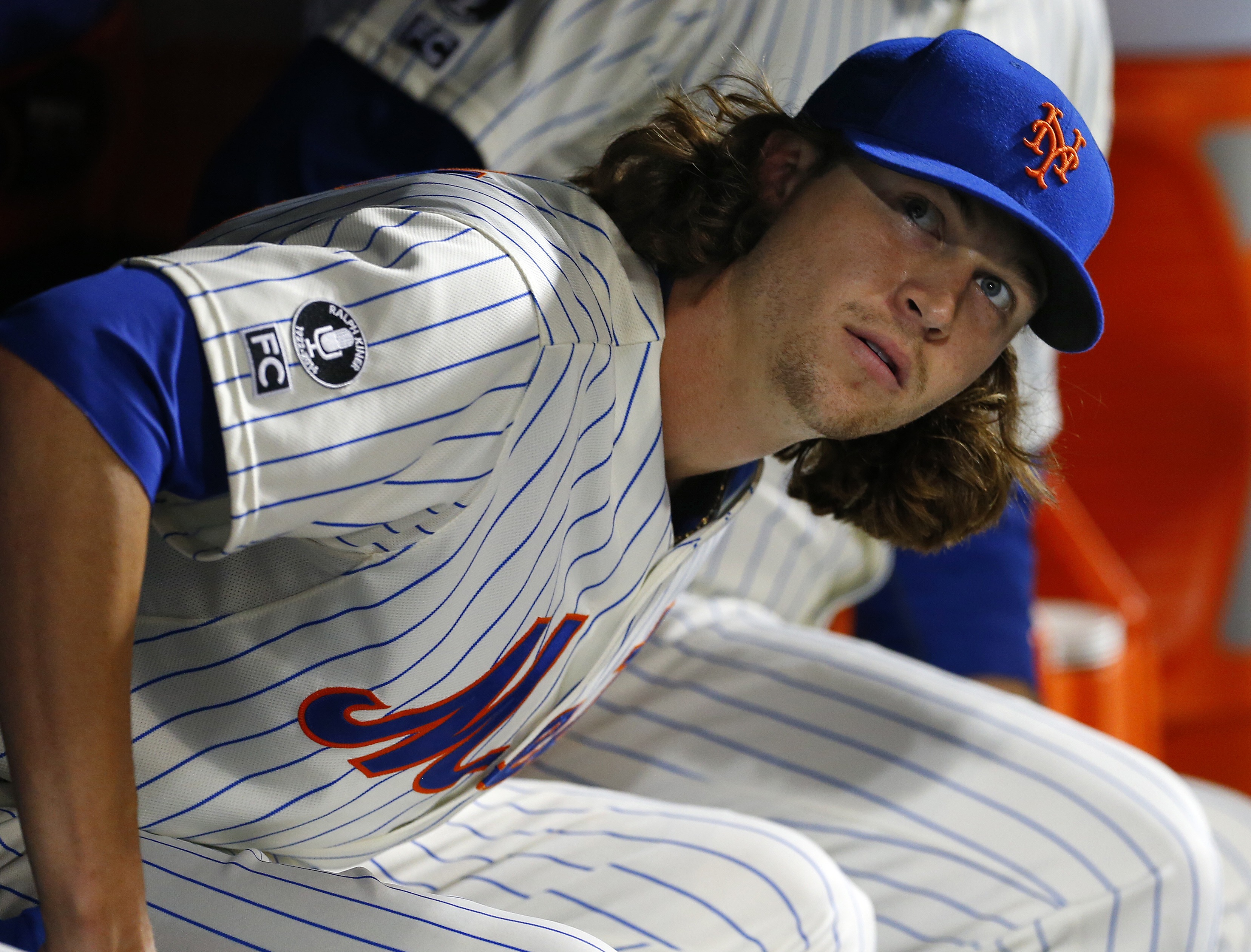