The Mets barely made a peep in protest as the Nationals completed another sweep at Citi Field behind the arm of Stephen Strasburg and the bat of Adam La Roche.

Looking back on this Mets season, I'm amazed at how few crushing defeats they've suffered. Sunday's game, when they blew a 6-1 lead in Philadelphia, is one of the few. Last night's near miss might qualify. Otherwise, the Mets have largely avoided the kick-things-and-call-in sick loss in 2014.

This is because they are not good. When a team is not good, you do not expect them to win and therefore do not despair when they don't. A not-good team's failure to win does not baffle you and never leaves you with the feeling How on earth did they lose that game?! You know exactly why they lost that game: They were demonstrably worse at baseball than the opposition. Tonight's game could be exhibit A in the case for this theory, a game in which the Nationals took advantage of their opportunities, the Mets eschewed what few they received, and the loyal fan never expected to see anything different. 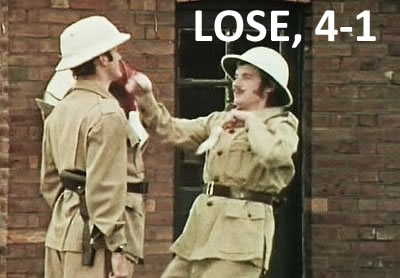 Tonight, La Roche strode to the plate with a man on first and two out in the top of the first. He had the gall to fall behind in the count 0-2 before sending a pitch the opposite way. Juan Lagares ran after the ball, fooling all observers into thinking he'd catch this as easily as he catches everything else. But the ball, having been hit by La Roche, continued to travel until it cleared what was once called the Great Wall of Flushing for a two-run homer. That gave him 27 home runs against the Mets in his career, and gave the Nats a 2-0 lead.

Gee worked a scoreless second and set down the side in order in the third, concluding with a La Roche groundout. (It can be done!) But the fourth began with a walk of Ian Desmond, already Gee's third walk of the game, and when the pitcher served up a flat 88 mph fastball to Bryce Harper, the youngster belted it into the bullpen for another two-run bomb.

Though he pitched a scoreless fifth and worked around a leadoff single by Desmond in the sixth, every pitch seemed like a struggle for Gee. A prime example came with two out in the sixth, when one of his offerings to Michael Taylor sailed high and headward. To the naked eye, it looked like Taylor was nailed in his helmet, prompting anguished groans from the crowd. In actuality, the ball only hit Taylor's bat. Tonight, even Gee's good luck was ugly.

Stephen Strasburg is one of those aces who I always hear is struggling some place far away, but who never thinks to bring those struggles to his meetups with the Mets (save a not-great start on opening day this year). That continued tonight, as he held the Mets in check in the first save a David Wright single, then set them down in order in the second and third.

In the fourth, the Mets managed to score despite some idiocy on the basepaths, with help from some shoddy Washington defense. Daniel Murphy led off the inning by sending a ball up the middle. Ian Desmond made a great play to grab it before it rolled into the outfield, but made a less great play when he flung his throw past first base, and Murphy ran to second on the miscue. One out later, Murph decided he'd try to steal third, even though Lucas Duda was at the plate and his team still trailed by four runs. Only Anthony Rendon's drop of the pickoff throw prevented Murph from a one-way ticket to TOOTBLAN City. He was eventually rewarded for his foolishness when Duda flew out to deep center, allowing him to score, but that would be all for the Mets offense in the frame. The fifth would bring another three-up, three-down.

Dillon Gee's evening officially came to an end when Eric Young batted for him to start the bottom of the seventh and snuck a double down the third base line. Then, Curtis Granderson worked a walk to put two men on base with no outs. (The free pass also prevented the Mets from not earning a walk in three consecutive games since the LBJ administration.) But Murph bounced into a double play and Wright struck out to kill the rally.

Josh Edgin was the first man out of the Mets bullpen and set down the first two batters he faced in the seventh before loading the bases on a single and two walks. Carlos Torres took Edgin's place and kept things respectable by striking out Desmond, then threw a scoreless eighth with some help from a typically spectacular running catch by Lagares. The herniated Jenrry Mejia contributed a 1-2-3 ninth.

These efforts merely preserved the status quo. Tyler Clippard picked up right where Strasburg left off in the bottom of the eighth by retiring the Mets in order while striking out a pair, and Rafael Soriano picked up the save in much easier fashion than he did the night before, though he had to endure a Terry Collins challenge of a pitch he thought he hit Duda (it didn't).

Thus concluded another listless Mets defeat as they were felled by a fatal dose of not goodness they've been fighting off for, oh, six seasons or so. They should get that thing checked out one of these days. 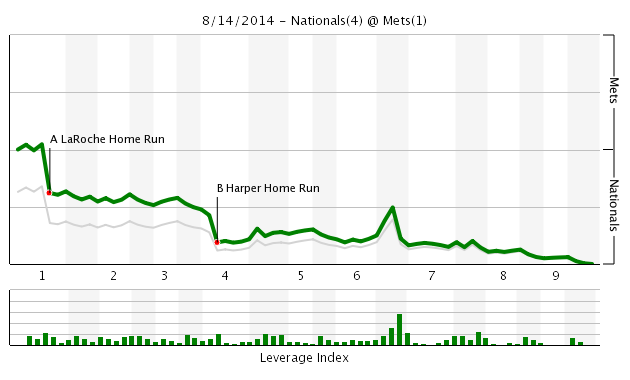