With no guarantees of playing time coming into the 2014 season, Duda has rewarded the Mets for their faith in him.

Share All sharing options for: The transformation of Mets first baseman Lucas Duda

Lucas Duda came into the 2014 season fighting for his job with his good friend, Ike Davis. Throughout spring training, everyone debated which player the Mets should keep for the long term. It was clear that the Mets were not inclined to keep both Davis and Duda on the roster for very long. The Mets made their decision on April 18 when Ike Davis was traded to the Pittsburgh Pirates. Since the trade, Lucas Duda has flourished. How good has he been? Let’s take a look.

As the everyday first baseman, Lucas Duda has had a breakout season. He’s been a completely different player and his teammates, including David Wright, have noticed. When asked about Lucas Duda’s success so far this season, Wright said, “It’s just amazing the transformation in such a short time period where he’s become one of the more dangerous hitters in the National League.” Duda has already set personal single-season highs in hits, doubles, stolen bases, home runs, RBI, and runs scored. Among first basemen, Duda ranks in the top 10 in home-runs (6th), RBI (9th), walks (8th), OPS (8th), and slugging percentage (7th).

“It’s just amazing the transformation in such a short time period where he’s become one of the more dangerous hitters in the National League.”

It’s no secret that Duda crushes fastballs. Fangraphs uses a metric called wFB/C, fastball runs above average per 100 pitches, to measure how effective a hitter is against fastballs. This season, Duda is second in baseball with a 2.24 wFB/C. In the past, Duda looked at fastballs when he was ahead in the count. Not this season. He has been much more aggressive early in the count as well. He has hit eight home runs within the first two pitches of an at-bat this season.

As you can see in the spray chart below, most of Duda’s hits this season have been to center field and right field. Duda is primarily a pull hitter and many teams use an overload shift to the first base side against Duda. However, he has still had a lot of success pulling the ball against the shift. Duda has a .376 pull ISO, which ranks in the top 20 in baseball. 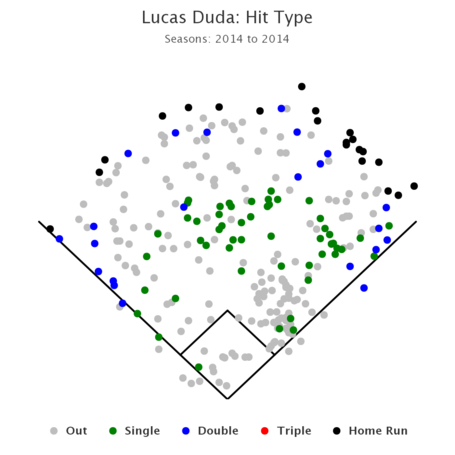 It’s been a very positive season for Lucas Duda so far, but there are still lots of adjustments to be made to his game. Most notably, Duda needs to improve against left-handed pitchers. He has hit .167/.250/.222 with 27 strikeouts in 80 plate appearances against lefties this season, a futility rate that can’t continue if he is going to be the everyday first baseman.

The Mets entered the 2014 season with two underachieving first basemen and the difficult task of betting on just one of them. It appears that the Mets have made the right choice.