Mets shortstops and the playoffs

A look at the Mets' playoff teams and the shortstops they used. Also Ruben Tejada.

Share All sharing options for: Mets shortstops and the playoffs

Much has been written and discussed about the impact a good shortstop can have on a team. It would appear that historically, most of the coveted shortstops have been strong enough defensively that teams were able to look past their offensive shortcomings. I don’t have to tell savvy baseball fans the importance of up-the-middle defense. With the exception of the period starting in the 1990s and through the present day, during which great-hitting shortstops (even those with power) seem to have become the norm, the shortstop position has frequently been manned by players of the strong fielder/weak hitter variety.

Over the years, it has been no different for the Mets, at least for most shortstops not named Jose Reyes. Reyes most certainly is the exception, in that in addition to being great in the field, the guy could flat-out hit—a great combination indeed. Unfortunately he’s now doing it for the Toronto Blue Jays, and not the Mets. The focus here is to examine the Mets' shortstops who have been a part of Mets playoff teams, and how their offensive and defensive numbers stack up. By the historic standard, current starting shortstop Ruben Tejada would appear to be the norm, and we will compare Tejada to the others. Of course, Tejada has not been part of a playoff team. 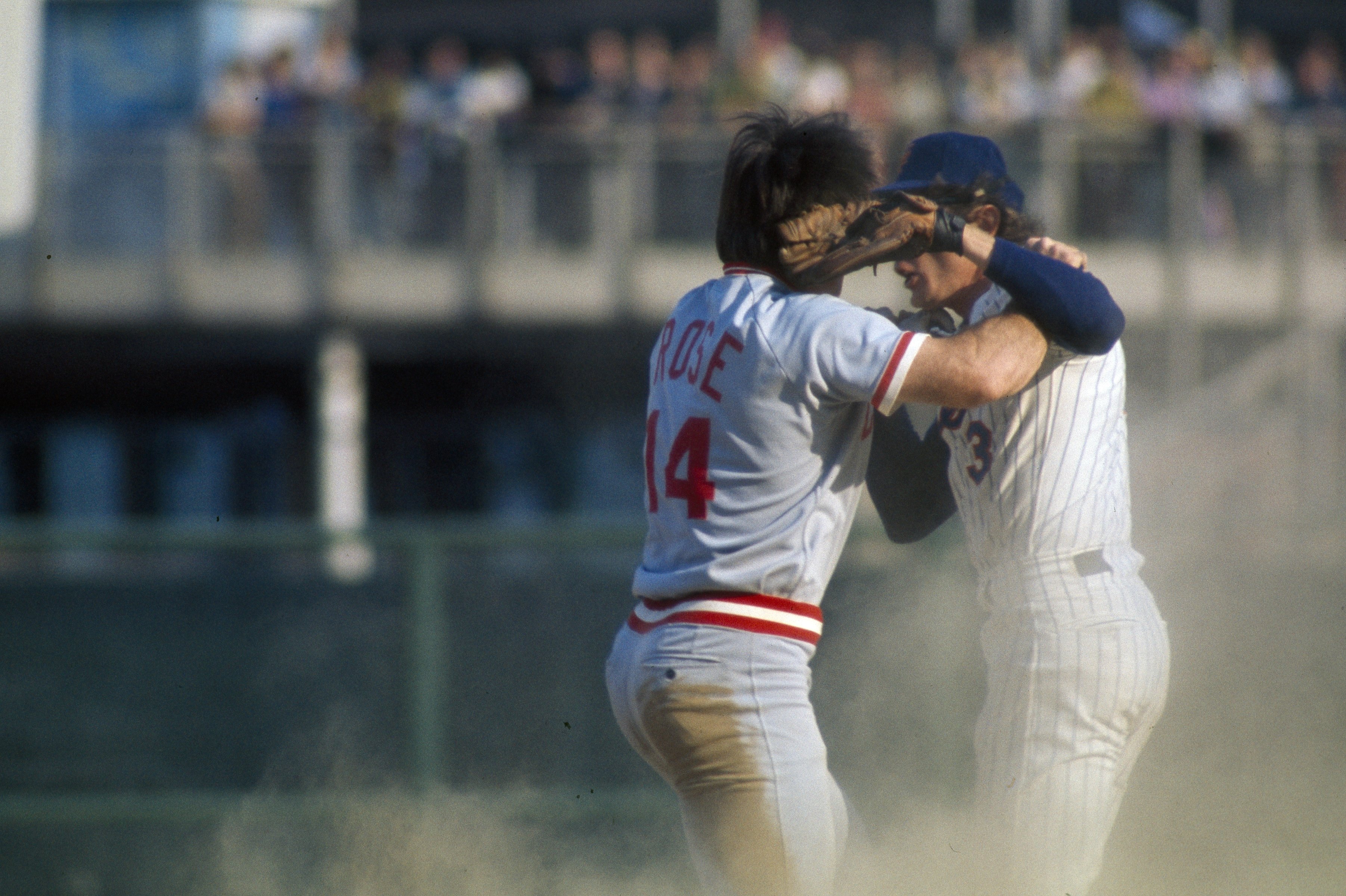 Bud Harrelson played for the Mets' 1969 and 1973 World Series teams and was with the team from 1965 through 1977. He retired in 1980 after sixteen seasons in the majors. He is perhaps best known for his fight with Pete Rose during the 1973 National League Championship Series against the Reds. Rose, as he was known to do, slid hard into second base trying to break up a double play attempt. Harrelson didn’t take too kindly to it, and fisticuffs ensued.

Defensively, his career fielding percentage comes in at .969. He wasn’t a slick fielder by any stretch, but he got the job done. I think it can be said that he was steady and hard-nosed. It should be noted that in 1969, Harrelson’s backup was the similar Al Weis; he also of the light-hitter/good-fielder ilk. Weis hit .215 that year, and was a career .219 hitter in 10 major league seasons. His .965 fielding percentage was just fine for a backup role. Weis had a terrific postseason for the Mets, hitting .417 with a home run (for a 1.196 OPS, small sample size notwithstanding). In 1973, the primary backup was Ted Martinez, who hit .255 and played a total of six positions. His .952 fielding percentage at SS was not much to write home about, but was adequate. 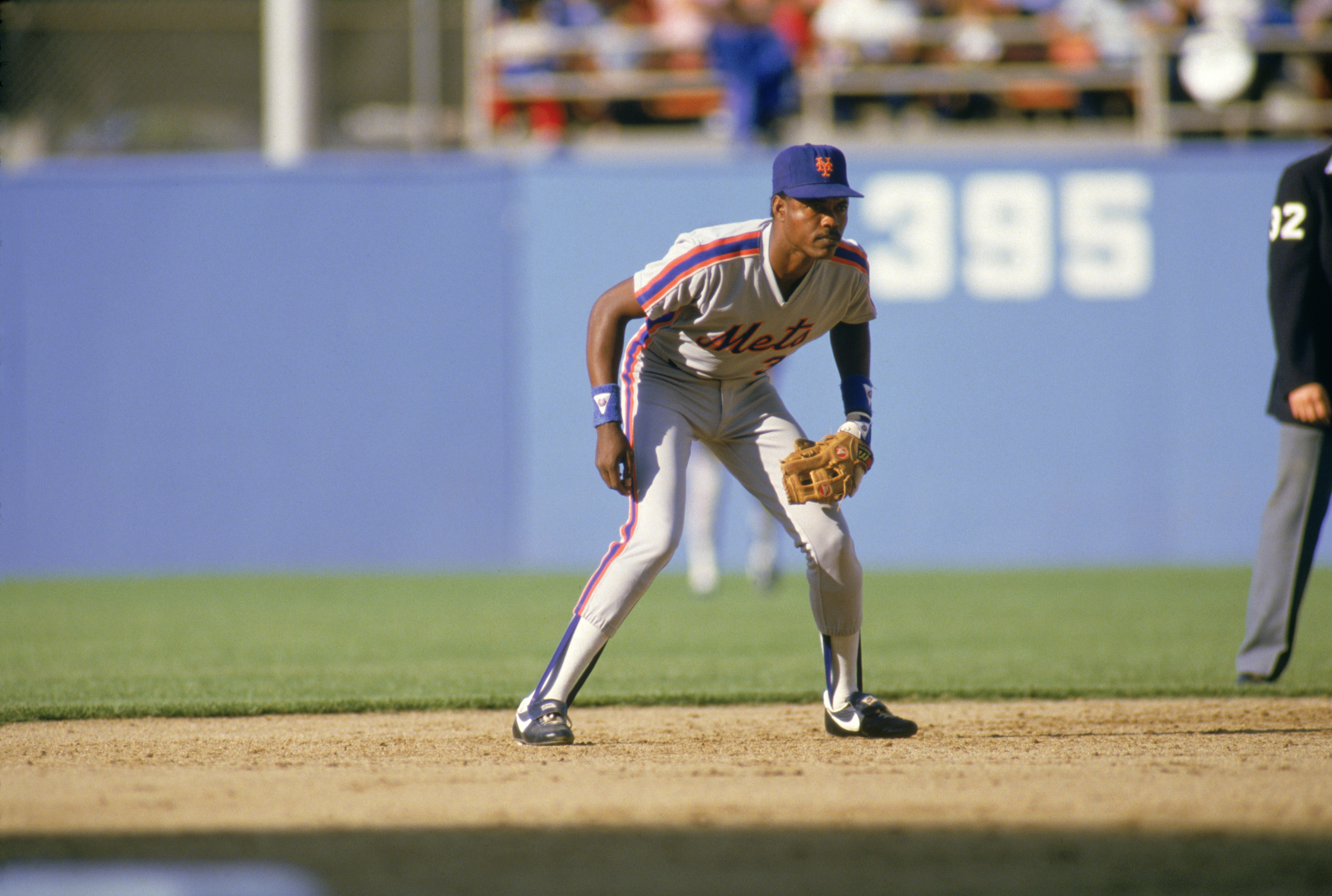 Defensively, his career fielding percentage comes in at .969, the same as Harrelson's. Essentially, we’re looking at a shortstop who was adequate at best. Several Mets served as backups at shortstop that year, including Kevin Mitchell, Howard Johnson, and Kevin Elster. Mets fans know that Mitchell went on to have a fine career as an outfielder for the Giants, while HoJo became a mainstay at third base for the Mets for several years, and Elster was the heir apparent at shortstop. All were more than adequate on a team that won 108 regular season games that year.

Santana finished seven seasons with a WAR of 0.5, 1.5 with the Mets. 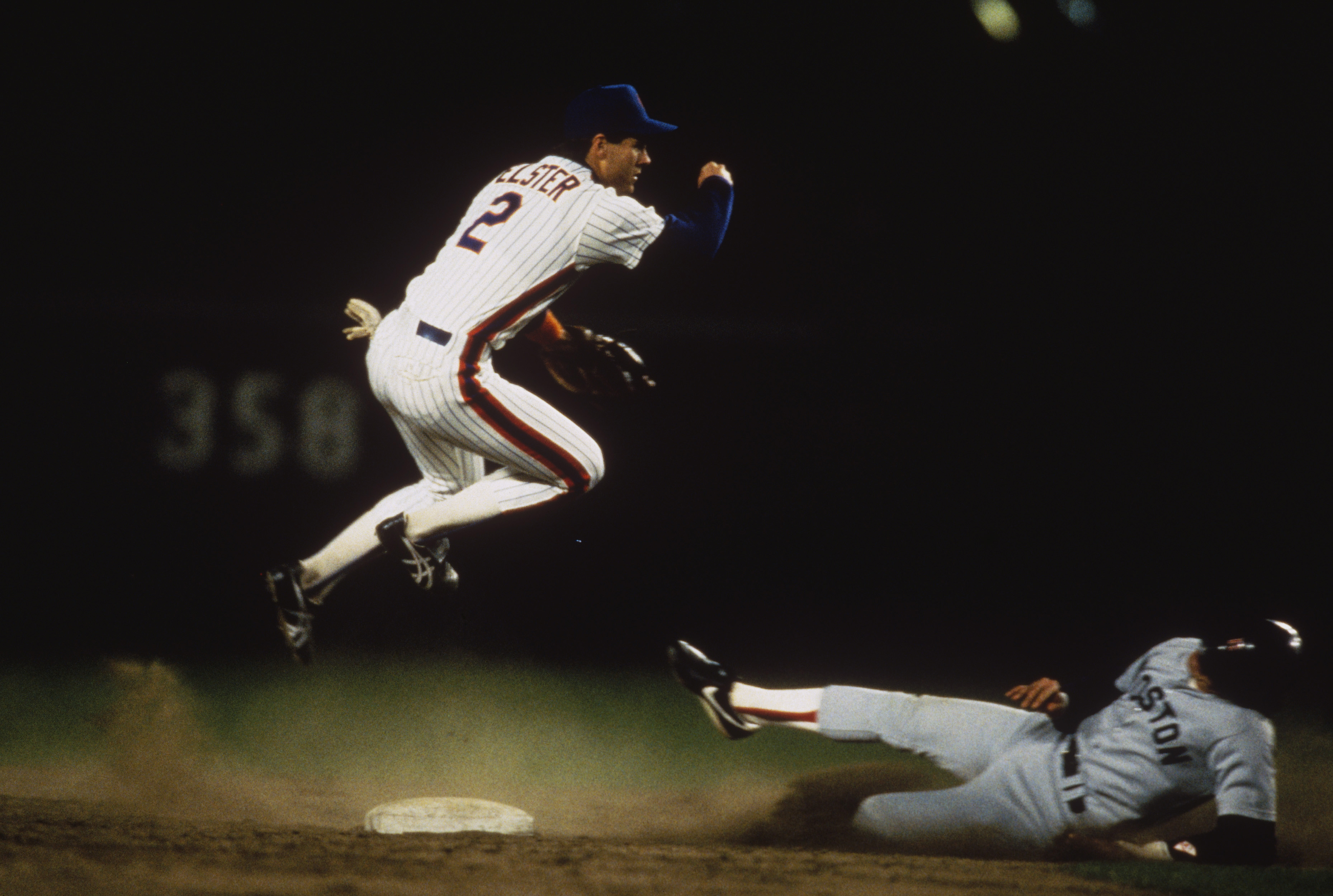 Defensively, Elster’s career fielding percentage logs in at .974, better than Harrelson and Santana. Elster was a very smooth fielder who could make the difficult plays. I recall on many occasions hearing Bob Murphy’s radio call of "…ground ball to shortstop, picked clean by Elster…" Elster, at 6 feet 2 inches tall, was tall for a shortstop compared to many of his contemporaries, but still had excellent range and a very strong arm. Keith Miller, utility player extraordinaire, backed up Elster at short during the 1988 season. Miller hit .214 that year and fielded at a .921 clip. 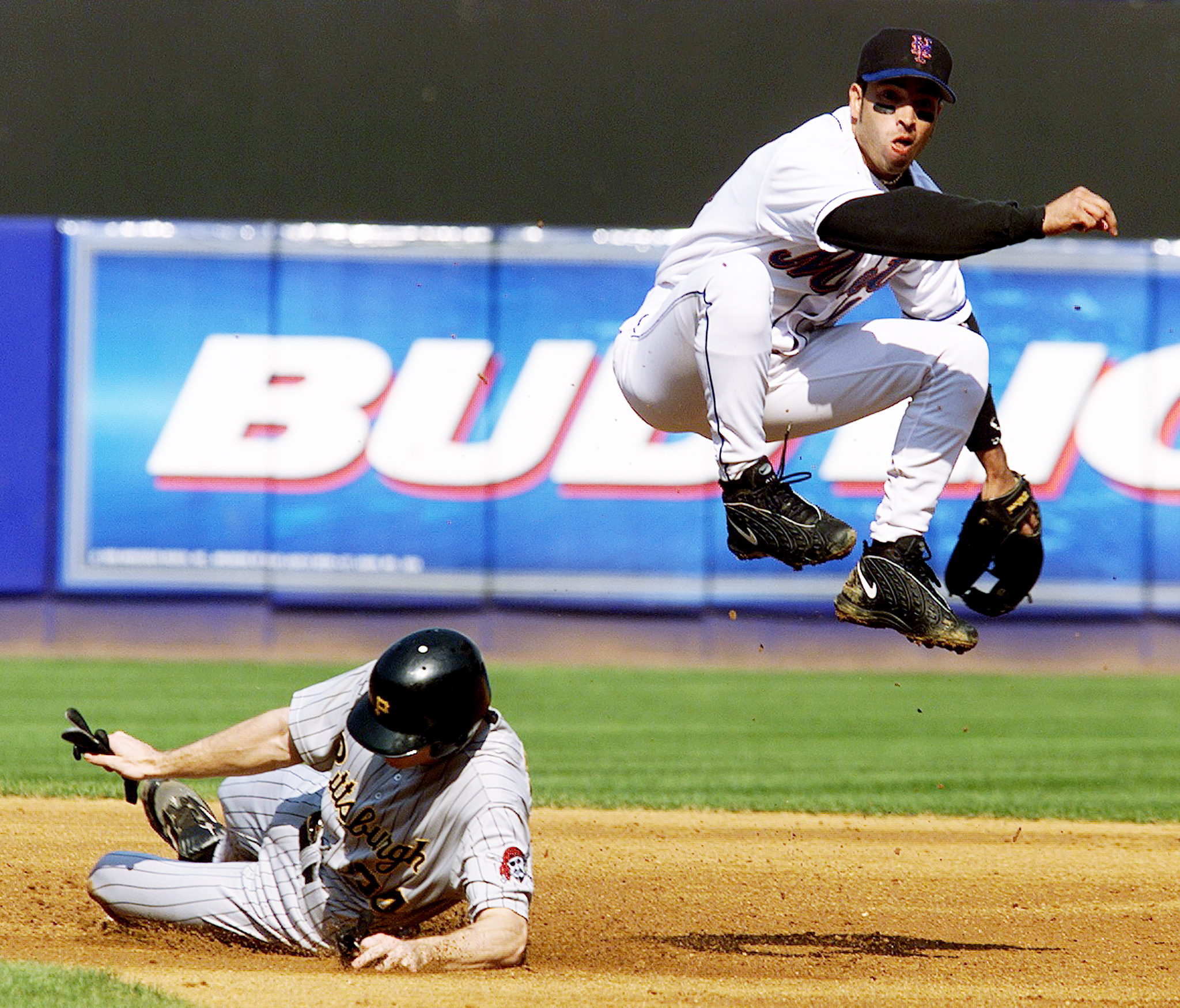 Defensively, Ordonez had great range, could make the throw from the hole look easy, and made many difficult plays. I recall a game against Houston late in the 1999 season when the Mets were fighting for the Wild Card and Ordonez made a spectacular diving catch on a fly ball hit into shallow left field. At 5 feet 9 inches tall, Ordonez was your prototypical shortstop, with a career fielding percentage of .976. His backup in 1999 was Luis Lopez; Shawon Dunston was acquired in a late-season deal and played some shortstop as well.

In 2000, Ordonez was limited to only 45 games due to injuries. Melvin Mora and Kurt Abbott served as backups until veteran Mike Bordick was acquired from Baltimore (for Mora and others) to take the starting job. Bordick would hit .260 for the Mets in 56 games, and only .111 in the postseason. He re-signed with Baltimore for the 2001 season.

Ordonez finished nine seasons with a 1.2 WAR, 0.9 with the Mets. 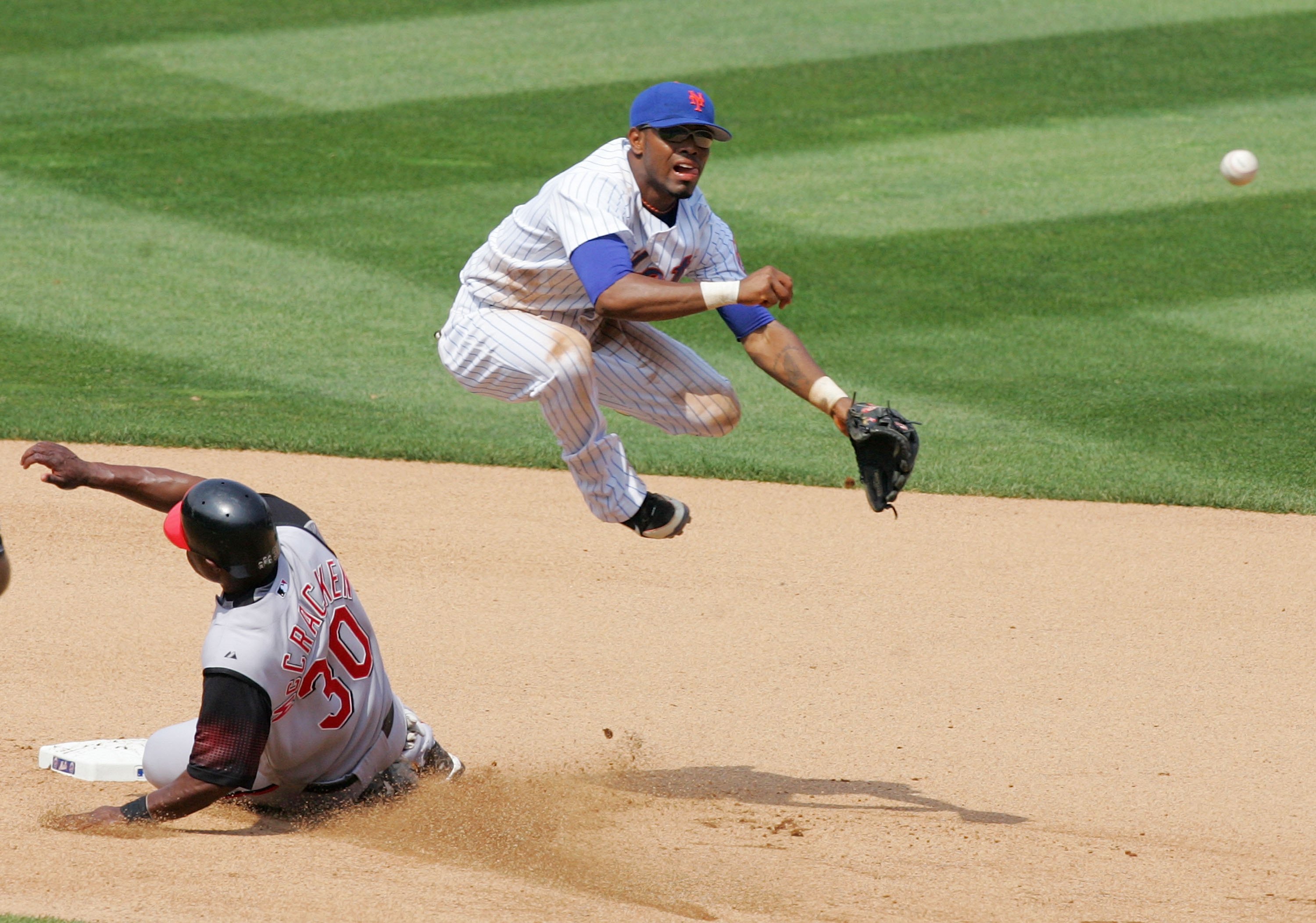 Jose Reyes was a Met from 2003 to 2011. He won the NL batting title in 2011, but the Mets did not re-sign him when he became a free agent. He was signed by the Marlins, where he played in 2012, then was traded to Toronto prior to the 2013 season. Reyes was an integral part of some great Mets offenses that included David Wright, Carlos Beltran, and Carlos Delgado. Although the Mets lost in the 2006 NLCS to the Cardinals, it seemed great things were just beginning. The ensuing years of 2007 and 2008 were heartbreaking, and 2006 marks the only year that a Mets team with Reyes made the playoffs.

While with the Mets, Reyes had a slash line of .292/.341/.441, with an OPS of .778. His career numbers: .291/.341/.437, with an OPS of .778. This mark is miles and miles ahead of any other shortstop in Mets history. Reyes led the NL in stolen bases for three years, in triples for four years, and as mentioned won the NL batting title in 2011, hitting .337. A prototypical leadoff hitter who is very likely the most exciting player to ever play for the Mets, Reyes has also shown the ability to hit for power at times, with 110 career homers, including years in which he hit 16 and 19 for the Mets.

Defensively, for his career, Reyes fielded at a .972 clip. At six feet tall and weighing 195 pounds, Reyes is typical of the more recent breed of shortstop, displaying great range and a strong throwing arm, one that can make the throw from the hole and up the middle. It is his hitting, however, that really sets him apart from others who have played the position for the Mets. During Reyes's years as the Mets' starting shortstop, his backups included Anderson Hernandez, Ruben Tejada, and several more who filled in while Reyes missed most of 2009 with injuries—and whom Mets fans would like to forget. 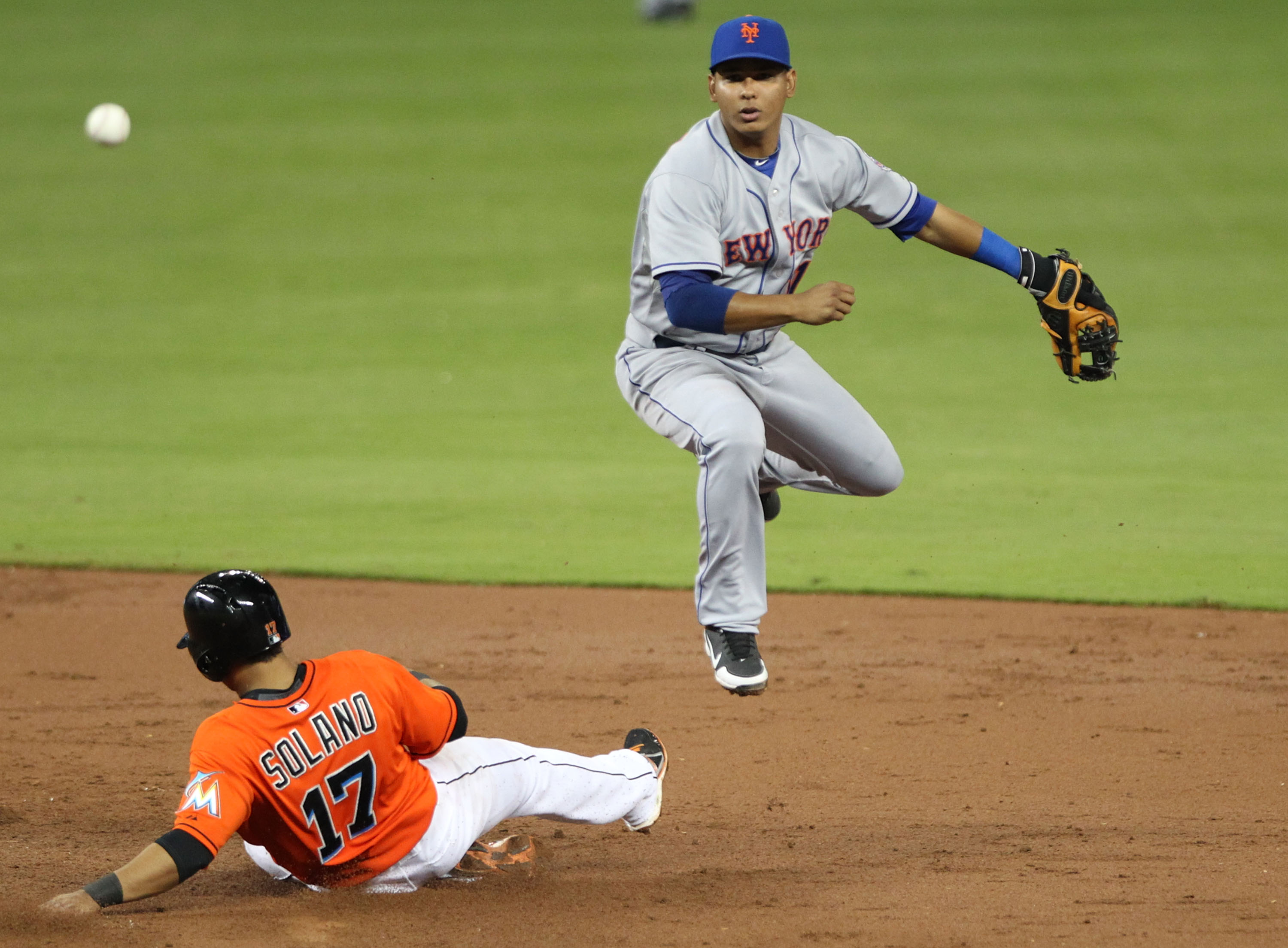 Ruben Tejada is currently the starting shortstop for the Mets in his fifth season with the club. He was Jose Reyes’s backup from 2010 to 2011, and took over the starting job in the 2012 season after Reyes signed a free-agent deal with the Marlins. Tejada hit well that first year, at a .289 clip; and although he was no Reyes, it seemed that his offense would be adequate for the position. After 2012, however, he regressed offensively, hitting only .202 in 2013, and as this article is being written, .224 in 2014. He played in only 57 games for the Mets in 2013; after a stint on the disabled list, he played a substantial part of the year at Triple-A Las Vegas, where he batted .288. Suffice it to say, the front office didn’t have much faith or confidence in him heading into 2014, and said as much.

His career slash line, including his 2014 numbers, is .252/.327/.311, with an OPS of .638. Of all the previous Mets reviewed here, he has played in the fewest games and has the fewest number of at-bats. Fair or not, Tejada has had the misfortune of following Reyes. Even though it has been almost three years now, many fans are still angry and upset that the Mets let Reyes leave.

Defensively, Tejada has fielded at a .975 clip over his career, a respectable number. That said, he is criticized for his lack of range at the position. Whether he is to be the full-time shortstop going forward remains to be seen, as his current backup, Wilmer Flores, has yet to be given a complete opportunity. Flores has shown he can rake at Triple-A, but has been an inconsistent hitter at the major league level over parts of two seasons, 2013 and 2014.

To conclude, in looking at the numbers, Tejada isn’t that much different from Harrelson, Santana, Elster, and Ordonez, or their backups. Perhaps it can be argued here that Tejada is nothing more than a backup; however, his numbers do compare with full-time players who were part of Mets playoff teams. The question on Mets fans' minds is whether Tejada can be part of a future Mets playoff team. I’ll let the fans determine whether your shortstop needs to be a good hitter, with the caveat that Jose Reyes-caliber players are uncommon at the shortstop position. From that standpoint, Mets fans were spoiled during those years, and it is truly a shame that only one Reyes team made the playoffs. Other factors to take into consideration include the supporting cast in the lineup, the pitching, and the ballpark, among others. Simple on one hand, but quite complex on the other.