The Mets promised they would spend money to improve their club after the 2013 season. The centerpiece of the club's offseason was Curtis Granderson, signed to a four-year, $60 million deal. Unfortunately, the Mets are not getting their money's worth.

Share All sharing options for: Curtis Granderson's struggles come at a steep price

The Mets' offensive struggles in 2014 have been well chronicled, though it wasn't supposed to be this way. After finishing in the bottom half of virtually every offensive category in 2013, general manager Sandy Alderson was able to pry open the Wilpons' checkbook last winter in an effort to fix it. He quickly—and curiously—signed Chris Young to a one-year, $7.25 million deal and then made his biggest splash by inking Curtis Granderson to a four-year, $60 million pact in early December. Although the former Yankee was coming off an injury-plagued year which saw him hit just .229/.317/.407 with seven home runs in 61 games, Alderson felt Granderson's pedigree, strong clubhouse presence, and ability hit the ball over the fence made for a worthwhile acquisition.

Granderson's success with the Yankees made the decision difficult to argue against. Discounting his abbreviated 2013 campaign, the 33-year-old hit .247/.337/.506 with 108 home runs and 292 RBI from 2010-2012, including back-to-back seasons of 40+ homers and a career-high—and AL-leading—119 RBI in 2011. Detractors of the signing pointed to Yankee Stadium's inviting right-field porch, a mere 318 feet from home plate as a prime reason Granderson's home run output skyrocketed. Moving to the much more formidable ballpark in Queens would surely have an impact on his power numbers, something the outfielder openly admitted.

"I've never gone up to a situation trying to do anything except for trying to get a good pitch and trying to hit it and do some damage with it. At Citi Field, some of that damage might be a little different than others."

Scarred by the disastrous signing of Jason Bay before the 2010 season, many fans were skeptical of the deal, despite Granderson's strong years with the crosstown Yankees. That skepticism looked prescient when the Mets' prized acquisition batted a putrid .136/.252/.216 with a single home run, seven RBI, and 29 strikeouts in 25 games in March and April combined. His BABIP was an almost unfathomably low .186 and he struck out in 28.5% of his at-bats, leading many to wonder if Granderson was in fact the second coming of Bay.

However, just as bad as he was in the season's opening month, the Illinois native rebounded in May and June, smacking 10 home runs and batting .275/.391/.492 with 29 RBI in 55 games, many from his new spot as the leadoff man in the Mets' lineup. Unfortunately, Granderson has reverted back to his early-season ways, struggling to a .175/.254/.237 batting line with only one home run and four RBI in 29 games since the All-Star break. He has not homered since July 26 against Milwaukee and after accumulating three straight multi-hit games earlier in August, Granderson is just 3-for-33 (.091) over his last eight games with one RBI. His second-half struggles have dragged the three-time All-Star's season stats down to .221/.324/.374—not exactly what he or the Mets had in mind.

Interestingly enough, Granderson is on pace for his lowest number of strikeouts (145) since 2010 and he's actually hitting .244 against left-handers (compared to .226 entering 2014). In addition, his walk rate (12.7%) and strikeout rate (22%) are both below his career averages coming into 2014, making his struggles even stranger. What's hampering Granderson in his first season as a Met is exceptionally poor numbers against right-handed pitchers (.212 batting average), a lower-than-average line drive rate (19.8%), a large increase in the number of infield fly balls (11%), the lowest home run per fly ball ratio of his career (9.7%), and a BABIP of just .259. Needless to say, his .153 ISO is the lowest of his career (discounting his nine-game cup of coffee in 2005) and far below his career mark of .221. All have conspired to drag Granderson's numbers down to near-replacement level in 2014 (1.2 WAR).

There was some thought Granderson would move back towards his hitting style with the Tigers: a gap-to-gap hitter who can also hit the ball out of the ballpark. Playing in the spacious confines of Comerica Park 81 times a year, Grandeson legged out 57 triples over six seasons in Detroit, including a major-league-best 23 in 2007. However, his move to the Yankees subsequently made him more of a pull hitter. Despite his change in approach, the chart below (from his last full season in 2012) shows that Granderson still enjoyed success hitting the ball to left field. 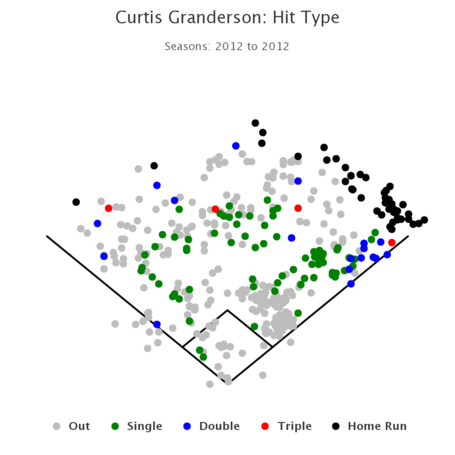 Compare that with his 2014 chart and you can see his opposite field average is significantly lower. 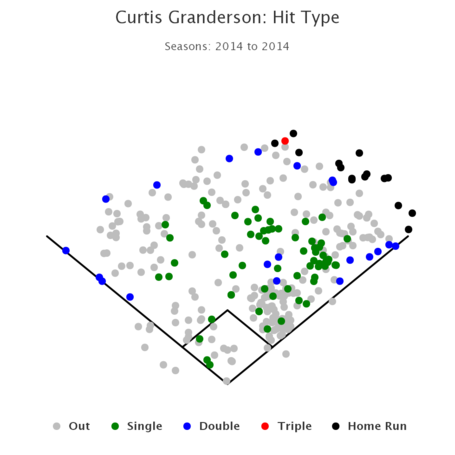 By the numbers, Granderson accumulated a .250 batting average when going to the opposite field in 2012, right in line with his .257 career mark. Acknowledging that there are still 40 games to play in 2014, he's currently hitting .190 when going to left field in 2014. Furthermore, his .311 average when pulling the ball in 2014 is 88 points off of his career mark (.398). He hit .423 when pulling the ball in 2012. Of course, his opposite-field struggles are just a small portion of what is ailing Granderson, not the least of which is 28 fewer home runs compared to 2012. Perhaps it's as simple as bad luck, evidenced by a BABIP far below the league average and Granderson's own career mark (.301). Maybe at the age of 33 his bat speed is a tick slower or his eyes are a millisecond behind in identifying pitches. Or maybe it's just a bad all-around year.

Whatever the reason, the unexpected struggles of Granderson and David Wright again have the Mets at the bottom of the league in all key offensive categories—figures that have become even uglier since the All-Star break. New York has not only scored the fewest runs in the major leagues (94), they are also dead last in average (.210), on-base percentage (.275), and slugging percentage (.306) in 32 second-half games. Their 18 home runs are third-worst in baseball during the same time. To put that into perspective, the Marlins' Giancarlo Stanton has 11 home runs by himself in the second half.

With three years and roughly $47 million still left on his deal after this year, Granderson needs to show at least some of the talent he exhibited in Detroit and the Bronx, or his contract will just be another in a long line of disastrous financial decisions for a club that seemingly can't afford to make them.