Mets vs. Oakland Recap: Not ideal

The Mets did not put up much of a fight and were battered in Oakland.

Share All sharing options for: Mets vs. Oakland Recap: Not ideal

Fresh off a long airplane flight, the Mets found themselves in Oakland tonight for their final west coast road trip of the season. They were unable to start it off on the right foot, however, and now find themselves on a three-game skid after falling to the Athletics by a score of 6-2. 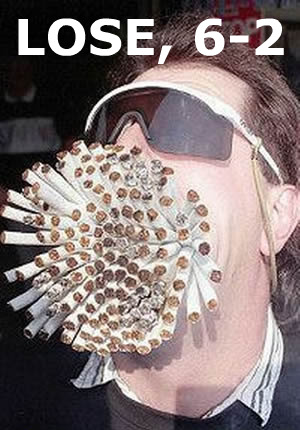 Scott Kazmir was on the mound tonight opposite Dillon Gee as the Mets looked to get their offense off of life support after a dismal hitting display in their previous series at home against the Chicago Cubs. The Mets faced Kazmir once before this season back at Citi Field in June and absolutely obliterated him to the tune of seven runs through three innings. It was the worst start of the season for Kazmir and he took the mound tonight with a look of determination and as though he had something to prove. He was able to accomplish what he had set out to do and quieted the Mets allowing just one run in his six innings on the mound.

Gee, who has struggled mightily since returning from a prolonged period on the disabled list in early July, continued his roller coaster season. It has been a story of one step forward, two steps back for Gee this year and he has been unable to put together any form of consistency this summer. He may have been pleased to draw the A's for tonight's start, as they have been in a tailspin lately and boasted just a single player in their lineup hitting over .300. Unforunately for Gee, he was erratic all night and allowed four earned runs through six and two thirds innings.

Both the Mets and A's had chances to score runs through the first three innings but neither could capitalize. The Mets put runners in scoring position in both the first and second innings but failed to drive anyone home. The A's, meanwhile, loaded the bases in the third but Gee got Josh Donaldson to strike out to end that threat. In the fourth, however, the scoring began.

In the top half of the inning, Travis d'Arnaud, who drew the start at designated hitter, led off with a solo shot to right center field. It was his eleventh home run on the season and the first he slugged to the opposite field. It was an impressive display of power from the young catcher. After getting off to a disastrous start and a spell on the disabled list, d'Arnaud is beginning to show off the bat that has always been so highly thought of as he made his way through the Toronto Blue Jays system. The Mets went quietly the rest of that inning as Kazmir got two strikeouts and a fly out after the homer.

The A's wasted no time in responding, though, and broke the game wide open in the bottom of the fourth. After Stephen Vogt got on base with a one out single, Derek Norris rocketed a double that put two runners in scoring position for Josh Reddick. Gee walked Reddick on just four pitches to load the bases. Alberto Callaspo then hit a sacrifice fly to tie the game at one. Eric Sogard then drew a walk to load the bases once again and bring up Coco Crisp. Gee got behind in the count and left a fastball up in the zone that Crisp rifled down the right field line for a triple that cleared the bases. Gee was throwing everything but the kitchen sink out there in the fourth and simply could not find the strike zone. He was consistently leaving his pitches up and uncharacteristically walked two in the inning. He finally got John Jaso to fly out to end the inning.

Despite the home run allowed to d'Arnaud, Kazmir was throwing the ball quite well. He punched out six Mets in his six innings of work before turning it over to the bullpen in the seventh. With the Mets down 4-1 at this point, it looked like the game was well beyond reach. However, the Mets had other ideas and quickly got after the A's bullpen.

Ryan Cook entered the game in the seventh and Wilmer Flores greeted him with a lead off double. It was, rather notably, the Mets fifth hit on the night. After Ruben Tejada grounded out, Anthony Recker lined a double down the third base line to score Flores and shrink the deficit to two. After Cook struck out Juan Lagares, A's manager Bob Melvin decided to turn to the left-handed Eric O'Flaherty to face Curtis Granderson. During Granderson's at bat, O'Flaherty threw a wild pitch that allowed Recker to move over to third, but it was of no consequence as O'Flaherty got Granderson to strike out swinging to end the inning.

After Edgin threw a scoreless seventh the A's turned it over to their set-up man, Luke Gregerson who retired all three batters he faced. The newly called up Gonzalez Germen was tasked with the eighth inning and keeping it a two-run ballgame, but he did not fair so well. After walking Derek Norris, he gave up a moonshot two-run homer to Josh Reddick that gave the A's their sixth run of the night and created an insurmountable gap.

Closer Sean Doolittle came out in a non-save situation, as he needed some work, and wrapped up the game in short order sending the majority of fans in attendance home with a smile.

There was not much good to take away from tonight's game. The Mets could have used a day off, but instead played a west coast night game and appeared to be rather sluggish. Besides d'Arnaud's home run, the offense as a whole was once again rather porous and is not affording the pitching staff much room for error these days.

Gee was disappointing tonight and his body language was not good throughout his start. He clearly did not have very good command or his best stuff and it was the second straight start where he allowed four earned runs. Gee is quickly running out of time to end his season on a positive note.

The Mets will play just one more game in Oakland tomorrow afternoon where they will turn to Zack Wheeler in hopes of splitting this brief two game series. 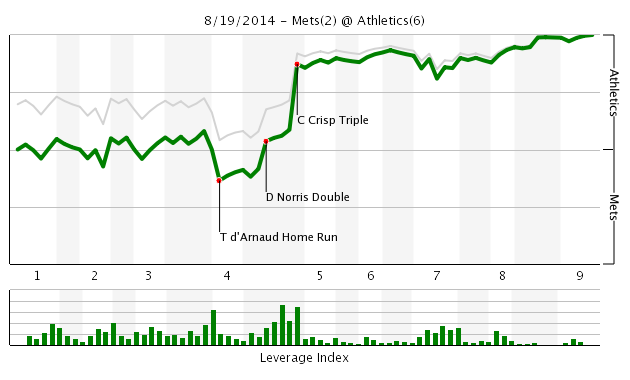