Mets vs. Athletics Recap: It wasn't pretty, but it'll do

The offense scored eight (!) runs and the Mets managed to split the series versus the Athletics.

Share All sharing options for: Mets vs. Athletics Recap: It wasn't pretty, but it'll do

If you felt a rumbling under your feet at some point in the late afternoon, it was most likely the Mets' offense registering a pulse for the first time in ages.

Today's win was not a total victory. The Mets made several costly errors in the field, Zack Wheeler did not possess his best stuff, and Vic Black and Jeurys Familia almost let the A's back in the game in the bottom of the eighth.

Nevertheless, in three consecutive innings the Amazins put runs on the board, and that made today's 8-5 win versus the A's, ultimately, quite satisfying. 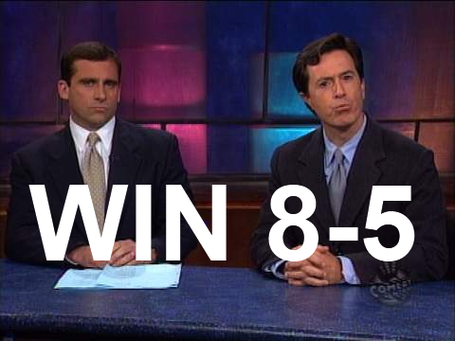 The contest started quietly enough. Athletics starter Jeff Samardzija and Wheeler both cruised through the first two frames without incident. In the top of the third, though, the Mets broke through in a huge way.

Eric Campbell led off that inning, and notched the game’s first hit with a homer to center that put the Mets on top 1-0. Samardzija recovered to retire Wilmer Flores and Eric Young, but then both Curtis Granderson and Daniel Murphy singled to put runners on first and second with two outs. The A’s starter then walked David Wright to load the bases and bring up Lucas Duda. Samardzija’s first pitch to the Dude was a wild one in the dirt that skipped away from catcher John Jaso. It seemed that Samardzija really wanted Granderson to score, as his next pitch was also wild, and this time, the right fielder darted home to put the Mets up 2-0.

After a brief conversation with A’s pitching coach Curt Young, Samardzija was even more generous to the Amazins, and served up an 88 mile per hour slider to Duda that the first baseman smacked well over the center field fence to put the Mets up 5-0. The party ended when Samardzija struck out Travis d’Arnaud, but it was a wonderful thing to see the Mets offense have a big inning. 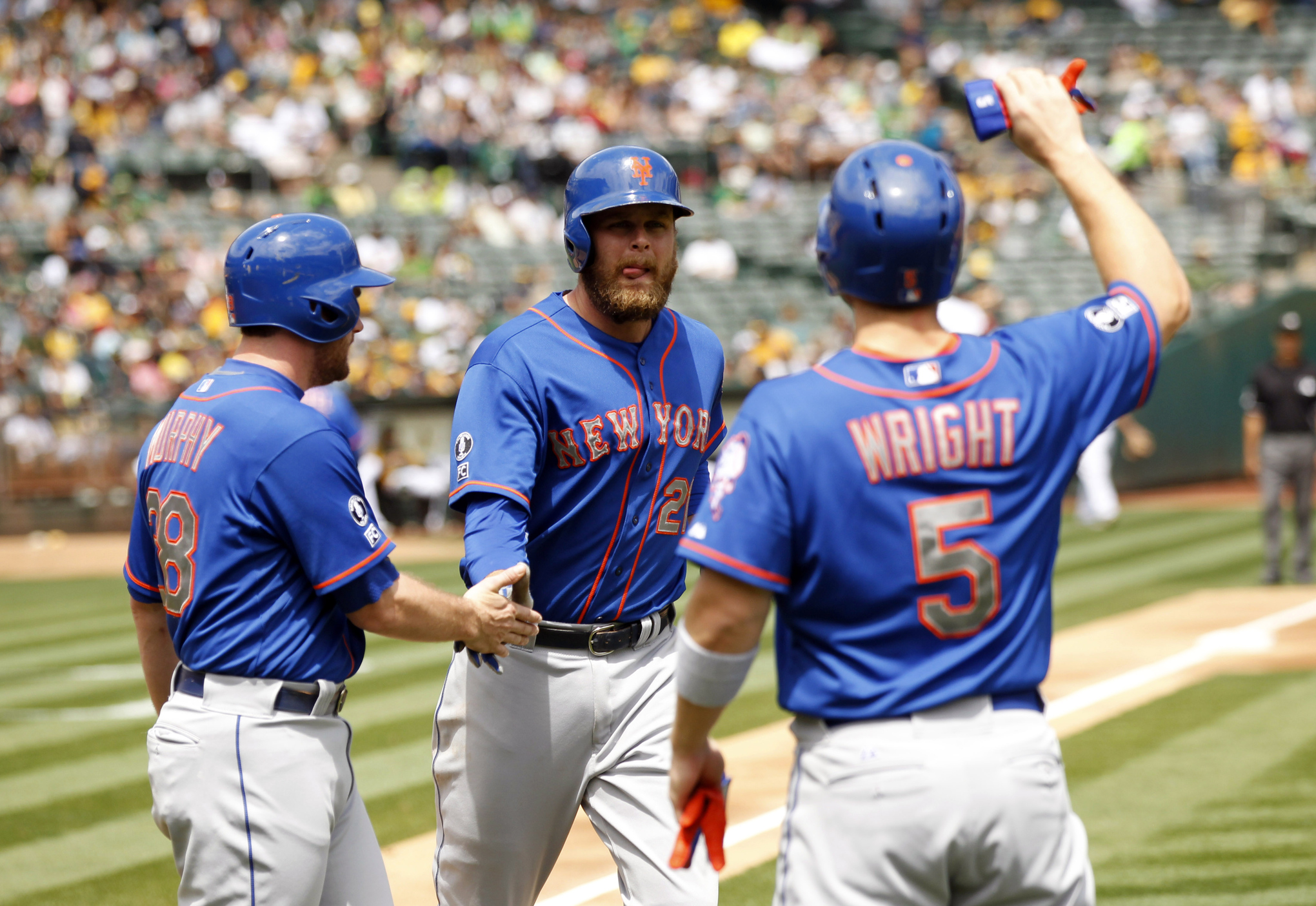 The A’s responded with some runs of their own in the home half of the third. After Wheeler set down Sam Fuld and Andy Parrino, he issued his first walk of the day to A’s second baseman Eric Sogard. Coco Crisp then doubled to right, which easily plated Sogard, and Crisp advanced to third after Daniel Murphy made a regrettable relay throw home that skipped away from d’Arnaud. John Jaso then drove in Crisp to make the score 5-2, and hustled out a double to put a runner on second with two outs. Wheeler regained his composure, however, and induced a popup to David Wright off the bat of Stephen Vogt to strand Jaso and end the inning.

Shockingly, the Mets actually managed to put some more runs on the board again in the fourth. With one out, Samardzija walked Eric Campbell. Wilmer Flores then got on with a fielder's choice, and Eric Young followed with his second single of the day to put runners on first and second with two outs. Curtis Granderson then drove in Flores with a single the other way to put the Mets up 6-2. They weren’t done, though, as Murphy came up next and smacked a single to right that drove in Young to restore the Mets' five-run lead. This latest run also signaled the end of Samardzija’s day, as Bob Melvin brought in Jesse Chavez to face David Wright, who struck out to end the inning and strand the runners.

At this point, Mets fans might have thought the Amazins were going cruise to a satisfying and rare easy win. It was not to be, as the A’s scored again in the bottom of the fourth. Wheeler started the adventure when he walked Brandon Moss to lead things off. Moss then advanced to second on Josh Reddick’s single to right. Though Wheeler retired the next batter, Alberto Callaspo, on a fielder’s choice to Duda, the runners advanced to second and third on the play. After a line out from Sam Fuld, Andy Parrino hit a routine ground ball to Daniel Murphy that the Mets second baseman fumbled and then booted (literally) into right field, allowing both runners to score and cut the Mets lead to 7-4. Wheeler then let up a single to center, and Dan Warthen came out to talk to his pitcher, as Coco Crisp stood on deck representing the tying run. Mercifully for Mets fans, Wheeler induced a ground out and got out of the inning.

Though Wheeler recorded two outs in the home half of the sixth, Josh Edgin came in to replace him after Wheeler issued a walk to Sam Fuld, ending the righty's streak of consecutive starts lasting at least six innings at nine.

The Mets got one run back in the fifth. Lucas Duda led off with a single to right, and though Chavez then struck out d’Arnaud and Matt den Dekker to notch two quick outs, he allowed consecutive singles to Eric Campbell and Wilmer Flores. The second of these drove in Duda to make the score 8-4. After a coaching visit to the mound, Eric Young grounded out to Eric Sogard to quell any further Mets scoring.

The game proceeded without any real excitement from either side until the bottom of the eighth, when the A's had their best chance to mount a comeback. After a Stephen Vogt ground out, Vic Black, who had come on in the seventh to replace Edgin, walked Brandon Moss. Josh Reddick then reached base after Lucas Duda misplayed a ground ball to put runners on first and second. Black then walked Callaspo on four pitches, and Terry Collins brought in Jeurys Familia to get the Mets out of the jam. Apparently, the fire wasn’t quite hot enough yet, as Familia walked Sam Fuld to make the score 8-5. He settled down, though, and struck out Andy Parrino and induced a clutch ground out from Josh Donaldson to get out of the inning.

Familia stayed on for the ninth, and though he issued a two-out double to Vogt, he got a grounder off the bat of Brandon Moss that Wilmer Flores made a nice play on to end the game and seal the Mets' victory. 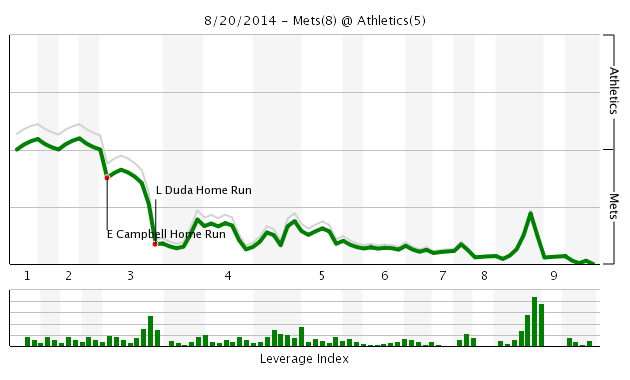