Are we finally seeing the real Travis d'Arnaud?

The struggles of Travis d'Arnaud ultimately led to a demotion to the minor leagues, but instead of letting it ruin a promising future, the young catcher has used it as a springboard to major league success.

Share All sharing options for: Are we finally seeing the real Travis d'Arnaud?

We've all heard the story. Called up to the Yankees early in the 1951 season, a youngster by the name of Mickey Mantle endured a slump so bad that he was eventually sent down to the minor leagues. As the story goes, the youngster was ready to give up on baseball altogether before a little tough love from his father changed his mind. After being summoned back up to New York a few weeks later, 'The Mick' would never see the minor leagues again.

The Mets certainly aren't expecting such results with Travis d'Arnaud. A franchise that has enjoyed the likes of Jerry Grote, Gary Carter, and Mike Piazza believed they had acquired another such impact catcher as the centerpiece of the R.A. Dickey trade after the 2012 season. But injuries continued to plague the young backstop in 2013, delaying his major league debut until mid-August of last year. Then he hit .202/.286/.263 in 99 at-bats, not exactly what Mets fans were expecting of the 2007 draft's 37th overall pick.

The Mets seemingly had no intention of making d'Arnaud's trip to Las Vegas a short one, but when he hit .436/.475/.909 with six home runs in 59 at-bats, his minor league stay was over after just fifteen games. A three-run home run in his first game back with the Mets on June 24 set things in motion for d'Arnaud, who finally looks like the player Baseball America deemed worthy of the seventeenth overall ranking on their 2012 prospect list.

So what exactly has d'Arnaud done since his return from Triple-A? If you ask him, he believes his problems were mostly mental, but while in Las Vegas, 51s skipper Wally Backman and hitting coach George Greer did a little tinkering of their own.

"George moved his back foot closer to the plate. He was having a hard time hitting the pitch away, but now he can cover the whole plate. If it was that simple all the time, it’d be great. That’s one of the things he wasn’t doing in the big leagues."

Interestingly enough, d'Arnaud's ability to cover the entire plate has not increased his percentage of hits to the opposite field. On the contrary, he now seems to be able to drive pitches on the mid-to-outer half of the plate to left-center far more frequently with increasingly positive results. His pre-demotion spray chart directly below shows a lot of weak contact and little or no ability to pull the ball outside of weak grounders and pop outs. 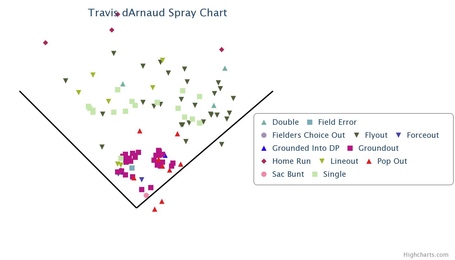 However, upon his return to the Mets in late June, d'Arnaud not only began pulling the ball, but doing so with authority he had yet to show as a big leaguer. 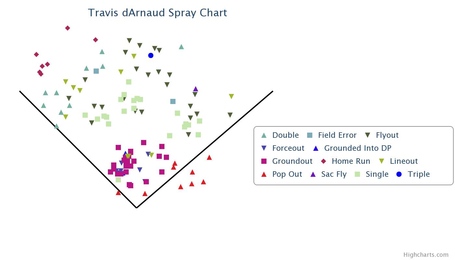 Just past his the first anniversary of his major league debut, both d'Arnaud and the Mets are pleased that he is finally showing the potential that made him such a highly touted prospect, one who has been twice traded in deals involving Cy Young Award winners.