The Mets took the first of this three game set with a 3-2 win tonight at Citi Field thanks to some great defense and timely hitting.

On Tuesday night, Dillon Gee got his first win since July 9 and pitched six-and-two-thirds innings, allowing only two runs. The Mets defense looked solid, and turned four double plays to help Gee and the other Mets pitchers get out of any jams they found themselves in. Furthermore, while the offense got only five hits, they came at clutch moments in the game, and allowed the Amazins to get a victory to open up this homestand versus the Braves on a happy note.

No, it wasn't a laugher. No, the Mets didn't turn a triple play, and no, Lucas Duda did not homer two more times. Simply put: it wasn't flashy. Nevertheless, it was a solid win for the Amazins, and a nice representation of how they will most likely win games in the future: with timely (if not explosive) hitting, solid (if not awe-inspiring) pitching and great (if not 1999-esque) defense. 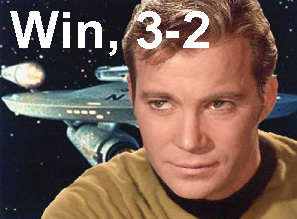 The contest started off quietly enough, until the bottom of the second, when the Mets scored the games first run. Braves starter Alex Wood started the inning by coughing up back-to-back singles to Travis d’Arnaud and Juan Lagares. After a Wilmer Flores fly out, Ruben Tejada drove d’Arnaud in with the Mets third hit of the inning to put the Amazins up 1-0.

Gee cruised through his first three innings, holding the Braves hitless. This was due in no small part to the stellar play of Juan Lagares, whose diving catch in the top of the third should serve as a particularly clear reminder of his greatness to any remaining doubters.

The Braves did eventually even things up in the top of the fourth. After Gee notched two quick outs, the Braves got their first hit of the night on a Freddie Freeman double to right. Freeman then advanced to third on a wild pitch, only to be easily driven in by Justin Upton, who smacked another two-out double to tie the score. Gee recovered though, and got out of the inning by inducing a fly out off the bat of Chris Johnson.

The Mets answered back in the home half of the fourth, however. Travis d’Arnaud led off by hustling out a double on a line drive to Justin Upton. (Fredi Gonzalez challenged the safe call at second to no avail.) Juan Lagares—who seemingly wanted to win the game all on his own tonight—came up next and hit his second homer in three games to put the Mets back on top 3-1. That was all they got though, as Wood set the next three men down in order. And the next three. And the three after that. In fact, he left the game having retired the last twelve Mets he faced.

It seemed like it didn't matter though, as Gee cruised through the fifth and sixth thanks to an unassisted double play by Lucas Duda in the former and an easy 1-2-3 inning in the latter.

In the seventh, though, Gee did run into a little trouble. Leading off, Justin Upton and Chris Johnson got on with a single and a walk, respectively. Though Gee got Evan Gattis to ground into a 6-4-3 double play, he allowed a single to Tommy La Stella that drove in Upton to cut the Mets lead to 3-2. This ended Gee’s night, and Terry went to Jeurys Familia to get out of the inning, which he did by inducing a ground out to short off the bat of Andrelton Simmons.

Things got a little exciting again for the Mets in the top of the eighth. After Familia set down the first two batters he saw in the inning without incident, Emilio Bonafacio singled to left to put the tying run on base. The next batter was Freddie Freeman, who statistically, seems to love nothing more than hitting Mets pitching. (He has a .324 average against the team with thirteen home runs.) Dan Warthen came out to talk to Familia, and the Mets reliever managed to work around a Bonafacio stolen base to induce a clutch fly out from Freeman to protect the Mets’ lead.

After the Mets failed to get anything going offensively in the bottom of the eighth, Jenrry Meija came on to pitch the ninth for the Mets, and promptly gave up a leadoff single to Justin Upton. However, the Mets turned their fourth double play of the night, this one on a grounder off the bat of Chris Johnson, and Meija struck out Evan Gattis to end the game and give the Mets a victory. 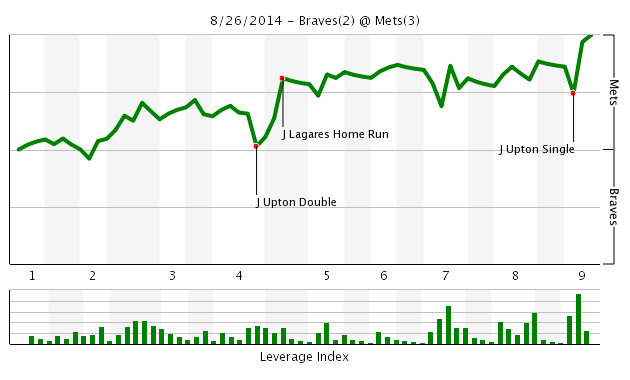