The Mets' offensive struggles continued, as Mike Minor shut our heroes down and the Braves won the three-game series.

The Mets won't be playing meaningful games during the rest of the season, in that they will not be in the playoff hunt. They can, however, play spoiler in some meaningful games for their NL East opponents. The Nationals, Braves, and Marlins are all jockeying for playoff position in varying degrees of seriousness, and many of the Mets' remaining games are against these foes. Tonight's game against the Braves presented such a spoiling opportunity. Unfortunately, our heroes shit the bed and the hated Braves didn't lose any ground in the Wild Card race. 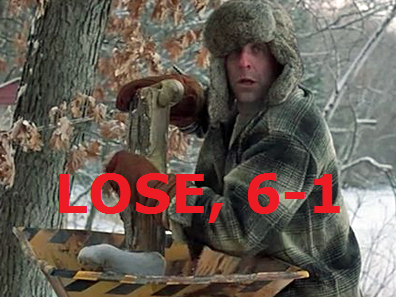 Braves starting pitcher Mike Minor was the star of the game. He dominated the Mets on the mound (seven innings, one run, four hits, five strikeouts, zero walks) and at the plate (2-for-3 with a double, a run scored, and an RBI). He was perfect through four innings before Lucas Duda singled leading off the fifth inning.

Hat tip to Minor, for sure, but he wasn't exactly facing an offensive juggernaut tonight. Outside of Duda, Juan Lagares, and Travis d'Arnaud, the Mets' lineup is pretty sorry right now. David Wright and Curtis Granderson combined to go 1-for-8 (Grandy managed an infield single) and now have OPSs of .687 and .688, respectively, on the season. Wilmer Flores and Ruben Tejada combined to go 0-for-6. Where would Tejada's OPS+ be without the 11 intentional walks he's been awarded this season? The Mets scored their lone run in the eighth inning, when d'Arnaud led off with a double and Eric Campbell drove him in with a single. Cheers to TdA extra-base hits.

Minor's counterpart, Jon Niese, pitched a serviceable game. It looked like he was throwing slop early on, as the Braves had three hits and a walk (including an RBI single by Minor) in the first two innings. He settled down after that, though, and breezed through innings three-through-seven in just 52 pitches, an average of about ten per inning. Despite the low pitch count, Niese faltered in the eighth inning, and Minor was once again the agitator. He led off with a well-struck opposite-field double, and was driven home two batters later by an Emilio Bonifacio triple that was hit too deep into center field for even Lagares to catch. Freddie Freeman then singled home Bonifacio, extending the Braves' lead to 3-0 and chasing Niese. Carlos Torres entered and struck out both Justin Upton and Chris Johnson to end the frame.

The Braves put the game out of reach in the ninth inning by scoring three runs against Daisuke Matsuzaka, fresh off the DL and making his first Mets appearance since late July. Welcome back, Dice-K!

The Mets start a three-game weekend series with the Phillies on Friday night at 7:10 pm ET. The pitching matchup is Jacob deGrom vs David Buchanan. 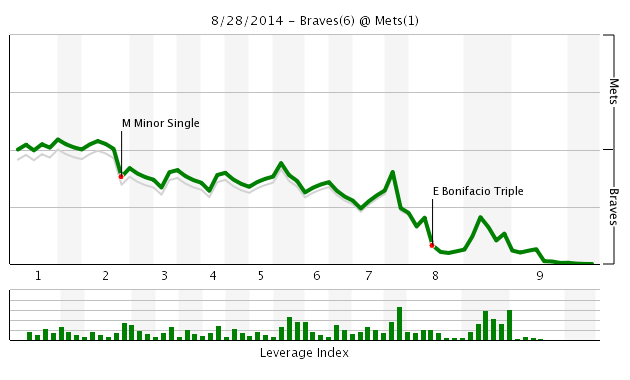