Let's just forget this one ever happened.

Remember last night's game? Remember how great that was? Man, Jacob deGrom pitched fantastically last night. It was really, really awesome to get to see the Mets emerge from an entertaining pitchers duel with a victory. 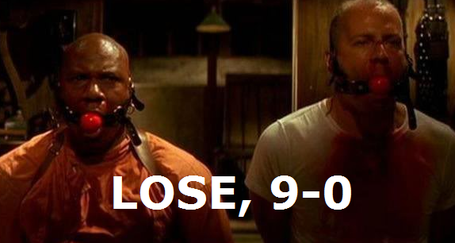 After pitching splendidly in his past two starts versus the Mariners and the Phillies, Bartolo Colon was not firing on all cylinders and the Giants jumped all over him. When Colon is at his best, he is a simple, brilliant innings eater, mystifyingly straight forward and laid back in the way he achieves outs. At his worst, he essentially throws glorified batting practice. Sadly for Mets fans, the latter Bartolo showed up today at Citi Field.

It didn't help that the Mets lineup was laughable against Madison Bumgarner. Bumgarner was coming off a rough start against the Pirates, and he pitched like a man with something to prove. He threw only 94 pitches the whole game, with 75 of them being strikes. After allowing a leadoff walk to Curtis Granderson; he didn't give up another free pass the rest of the contest, and struck out ten. The only two Mets hits were a Wilmer Flores double in the third that Michael Morse misplayed (it's time to get this guy on the payroll!)  and a broken bat single to David Wright in the seventh. To say it simply: he put on a clinic.

The Giants, on the other hand, had no problem with Mets pitching. After getting through the first and the second inning without any major issues, Colon ran into trouble in the third when Brandon Crawford led off the inning with a single to right. Bumgarner sacrificed him over to second, needlessly as it turned out, because alien life-form Hunter Pence came up next and muscled a homer into left field to put the Giants up 2-0. Colon got the next two batters without an issue, but in the fourth, Brandon Belt hit a fly ball that kept on carrying over the right field fence to add a run to the Giants tally.

At this point, the game was 3-0, and while Colon was clearly not at his best, he certainly had kept the Mets within striking distance. He remedied that with his performance in the fifth when, after striking out Crawford, he allowed a single to Bumgarner on a fastball right over the plate. (Sidebar: Why are people still throwing fastballs right over the plate to Madison Bumgarner? Have we not learned?) Bumgarner then advanced to second on Anthony Recker's pass ball. This proved costly, as Pence came up and did whatever Hunter Pence does and smacked a ball to left to drive in Bumgarner. He also hustled around first to turn it into a double, which was just really, really irritating. After that, Colon got recent call-up Matt Duffy, who looks like he just got his learners permit, to ground out to second, but Pence advanced to third on the play. He didn't stay there long, as Buster Posey doubled to drive him in to put the Giants up 5-0. But the merry-go-round wasn't going to stop there, because Pablo Sandoval came on and singled in Posey to put the Mets in a 6-0 hole and knock Bartolo out of the game. Buddy Carlyle came in and got Brandon Belt to fly out to Granderson to stop the bleeding.

The Giants scored three more runs, all of them coming off of two homers. The first was a Buster Posey two-run shot off of Carlos Torres in the seventh, and the second came off the bat of that meddling Hunter Pence against Dana Eveland in the ninth to put the final score at 9-0.

The Giants came into today having hit only two homers in their last nine games. To our colleagues at McCovey Chronicles: you're welcome.

Dillon Gee will try and even the series tomorrow at high noon against Tim Hudson. Above all, I hope Michael Morse starts, as his positively Duda-esque play in left field gives me hope for a Mets victory. 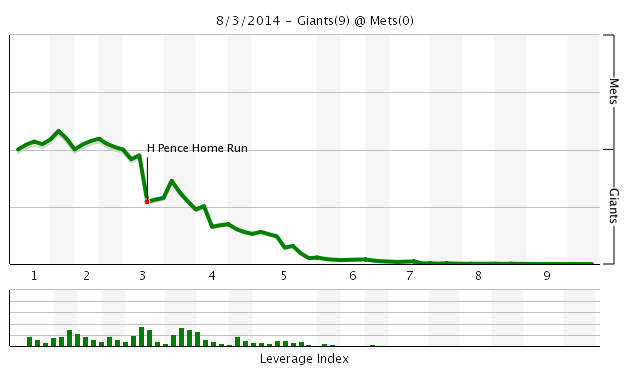