Offensive consistency would be Juan-derful for Lagares

Watching Juan Lagares roam center field is as pleasurable a sight as there is in baseball. However, his offensive shortcomings still leave something to be desired.

Share All sharing options for: Offensive consistency would be Juan-derful for Lagares

With apologies to the Milwaukee Brewers' Carlos Gomez, it's not a stretch to call Juan Lagares the best defensive outfielder in baseball. Whether he is running down fly balls in the gap with the grace of Joe DiMaggio or using his cannon of an arm to thwart baserunners from taking an extra base, praise for Lagares's defense is universal.

But while the 25-year-old may be to defense what Michelangelo was to art, his offense remains a work in progress. Mike Vorkunov of the Star-Ledger recently penned a column noting the Mets' belief in Lagares as they move into 2015 and beyond.

Lagares has improved at the plate this season. He is hitting .277 this season, while showing off his usual defensive abilities. Though he is not quite an All-Star candidate as Collins predicted this spring that he would be if he hit .280, he is hitting enough. His on-base percentage—.318—is above the National League average of .311.

Vorkunov is right. Lagares is having a solid season, bolstered by his Gold Glove-caliber defense. However, the Mets are an offense stuck in neutral, if not reverse. Barring a return to their offensive exploits of 2006 when three players enjoyed 100-RBI seasons, more offensive consistency from Lagares would be a huge plus.

Make no mistake about it: Lagares should be in the lineup every night. His defense alone is worth the price of admission and, as Vorkunov noted, he isn't embarrassing himself with the bat. A strong start to the year was interrupted in June by a three-week stay on the disabled list, his second DL trip of the season. Prior to his right intercostal strain, the defensive whiz hit .295/.337/.429 with a solid OPS of .767 in 42 games. Though largely helped by a .373 BABIP, Lagares enjoyed a wRC+ of 117 and was one of New York's most consistent hitters through the first two months.

Unfortunately that production has dipped rather noticeably since late June. In the 53 games since his return from the disabled list on June 26, Lagares is hitting .258/.293/.337 with a wOBA of .280 and a wRC+ of 80. Not surprisingly, his dip in average has coincided with his BABIP falling to .317. While he has shown an ability to put the ball in play, he is doing so at the expense of better at-bats. A free-swinger, Lagares's walk rate is a paltry 4.1% while his strikeout rate stands at 20.9%. To put that into a clearer perspective, his strikeout-to-walk ratio is an unhealthy 76/15 this season, one year after posting a 96/20 mark.

That plate discipline, or lack thereof, is what the Mets and manager Terry Collins are trying to instill in their center fielder.

"We gotta get him to get that on-base up. We gotta get him to use his power a little bit. This guy absolutely bombs balls in BP. So we know the power is there. As we all know, some young guys learn how to hit with power. It doesn’t just happen to a lot of guys. I think as he continues to play and continues to grow at this level, he’s going to have some power."

It's no secret that selectivity and extending at-bats can ultimately lead to better pitches to hit and drive, something with which Lagares is still struggling. According to FanGraphs' PITCHf/x Plate Discipline, Lagares is swinging at 34% of pitches outside of the strike zone—a slight improvement from his 35.6% figure from 2013, but still higher than the league average of roughly 30%.

No one is expecting Lagares to exhibit the patience of Frank Thomas, but the graph below shows too wide a disparity between the league average walk rate compared to that of Lagares. 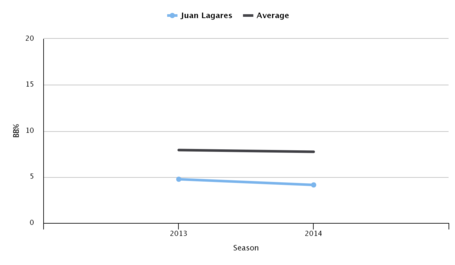 Would closing that gap boost Lagares's offensive numbers? More than likely, but turning a free-swinger into a hitter with even average plate discipline isn't all that simple, especially for a player who never walked in more than 6.8% of his plate appearances in the minor leagues. That's not to say that the Dominican Republic native can't or won't improve. The focus on Lagares's offense speaks more to the Mets' inability as a team to score runs than it does to a player who has appeared in just over 200 major league games.

To be sure, offensive improvement from Lagares would go a long way in helping his team. His current OPS+ of 98, though 23 points higher than it was in 2013, is still slightly below league average. The Mets think that, with improved plate discipline, he can begin showing 15-home run power. That may be optimistic, but it's certainly not out of the realm of possibility.

One thing is certain: Lagares's defensive prowess is so special that he needs to be the starting center fielder for New York. It's up to him to make the "does he hit enough?" crowd fade away into the background. It's up to the Mets to surround Lagares with enough offensive talent.

If not, unreasonable expectations may ultimately send the best defensive outfielder in Mets' history to the bench—a scenario in which nobody wins.