LOLMets is popular all over the internet, so we figured we'd add a little context to it. We introduce to you The LOLMets Index!

Share All sharing options for: Introducing The LOLMets Index!

As much as the Mets are known for the "Miracle Mets", Tug McGraw's "Ya Gotta Believe" rally cry, and the little grounder up along first that got through Buckner, the Queens baseball franchise is also well known for its frequent blunders and mistakes. As the Mets have spiraled in recent years, the term LOLMets has grown in usage among baseball fans across the internet. For the uninitiated, LOLMets is the phrase that people use to designate something unflattering, embarrassing, or downright moronic that the Mets do.

Whenever the Mets make a misstep on or off the field, it's labeled "LOLMets!" and laughed at. The amount of potential LOLMets moments in the universe is practically uncountable and if there's one organization that will figure out how to make an unthinkable gaffe happen, it's typically the Mets. Too often, the organization is unable to get out of its own way, even when they have the best of intentions. In light of yesterday's news that the team and their owners are facing a brand new lawsuit, we've decided to aid all of you in your LOLMets-ing this time by creating "The LOLMets Index". This index allows you to rank just how LOLMets an LOLMets moment is in context to some of the most infamous LOLMets moments in recent history. Believe it or not, there are a number of degrees of LOLMets. 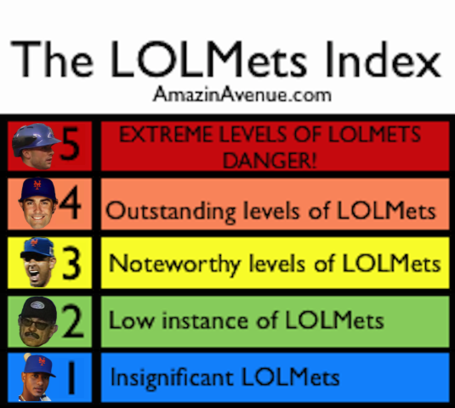 The LOLMets Index runs up to 5, the highest level which is the rare Extreme Level of LOLMets, and each level is associated with a different color. Let's run down some previous examples of the different levels of LOLMets:

As a Mets fan, it can understandably be aggravating to see your team laughed at so often but it's important to remember that baseball is just an entertaining game and there's little reason for fans to be uptight about it. The Mets are embarrassing, they often do things wrong, and they'll likely keep doing things wrong unless they make some very big organizational changes (and heck, that might not even do it. Look at their past. Embarrassing moments seem to be written into the organization's DNA). Laughter is often the best medicine and as the saying goes: if you can't laugh at yourself, who can you laugh at?

Are there any notable moments we may have forgotten to include? Go ahead and add them in the comments below and be sure to note which level they'd rank on the Index!