The Mets got five hits all night—with Eric Young Jr. had three—and won to take seven of eight from Colorado this year.

Share All sharing options for: Mets vs. Rockies Recap: Montero labors to earn his first victory

A sweep is a sweep, and tonight, the Mets swept the inept Rockies right out of town. Despite the fact that David Wright has been shut down for the year, Mets fans can take some solace in the fact that the Amazins are only four games under .500 with a little more than two weeks left to play thanks to their 2-0 win on Wednesday night. 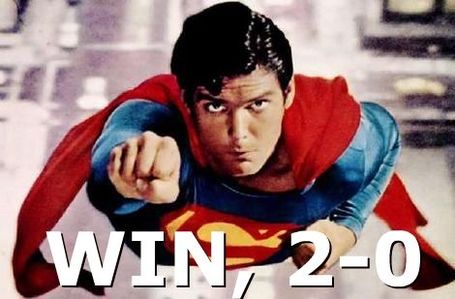 In what was likely his final start of the season, Rafael Montero managed to get his first win as a major leaguer, despite struggling with a high pitch count. His first inning was a great example. After striking out the first two batters he faced, Montero issued walks to both Justin Morneau and Nelson Arenado before inducing a fly ball out off the bat of Corey Dickerson to get out of the inning. It took him 23 pitches to finish the frame, and it didn't get any less strenuous for him as the game wore on.

Rockies starter Tyler Matzek pitched well enough to win tonight and shut down the Mets during most of his time on the rubber. In the second, however, the Mets got on the board and scored the only run they needed. After Matzek struck out Eric Campbell and Curtis Granderson, Dilson Herrera walked to put a runner on for Eric Young Jr., who made his former team pay, as he tripled to right-center field to drive in Herrera and give the Mets a 1-0 lead. It was the first earned run Matzek had given up in twenty-three innings.

Montero set down the Rockies in order in the second and third, despite throwing a bunch of pitches. In the fourth, he issued another walk to Morneau, but thanks to an Arenado pop out and a ground ball double play, he again made it through the inning without allowing a hit.

In the fifth, Montero ran into his first bit of real trouble. After setting down the first two batters he faced, the righty walked DJ LeMahieu. This brought up Matzek, who roped a double to left, which also represented his team's first hit of the night. Montero recovered, though, and got Charlie Blackmon to pop out end the inning and strand the runners to keep his hard-fought shutout intact.

The sixth also proved difficult for Montero. After the Mets stranded two runners in the bottom of the fifth, Drew Stubbs led off with a double on the first pitch he saw in the inning. Justin Morneau then singled on a groundball that skipped past Wilmer Flores to put runners on the corners with no out. Though he then struck out Nolan Arenado, Montero had thrown 106 pitches, and Terry decided to go to the bullpen to escape the jam. Dario Alvarez and Carlos Torres got an out each, with the former inducing a weak ground ball off the bat of Corey Dickerson for out number two, and the latter causing Michael McKenry to pop out to Wilmer Flores to end the inning. Torres returned for the top of the seventh, and worked around a one-out single LeMahieu to put another goose egg on the board.

After squandering Eric Young Jr.'s second hit of the night and a Matzek fielding error in the fifth, and going down in order in the sixth against the Rockies starter,the Mets finally added to their lead in the bottom of the seventh. After a Curtis Granderson ground out, Dilson Herrera got on with his second walk of the night, and Herrera advanced to second as "The Eric Young Jr. Redemption Journey," continued when the Mets left fielder notched his third hit of the game. Josh Satin then came up to pinch hit for Torres and drew a walk. While Matzek had set down next batter Juan Lagares without issue the whole game, Walt Weiss decided to bring in Matt Belisle with the bases loaded. Thankfully, Lagares managed to pad the Mets lead by hitting a sacrifice fly to left field that drove in Herrera to put the Mets up by 2-0. However, Wilmer Flores popped out to second to strand the runners and keep the game exciting going into the final two innings.

Jeurys Familia replaced Carlos Torres in the top of the eighth. After getting Charlie Blackmon to ground out, Drew Stubbs walked to bring the tying run to the plate in exactly who Familia probably wanted to face in this situation: Justin Morneau. Joking aside, Familia managed to retire Morneau for the first time all night by inducing a ground out to second. Stubbs advanced to second on the play, and though he then stole third, Familia struck out Arenado to end the inning and keep Montero in line for the win.

Finally, after the Mets again failed to get some insurance runs in the bottom of the eighth, Jenrry Meija came in to earn the save, pitching an adventure-less ninth to redeem himself after his poor showing the previous night. 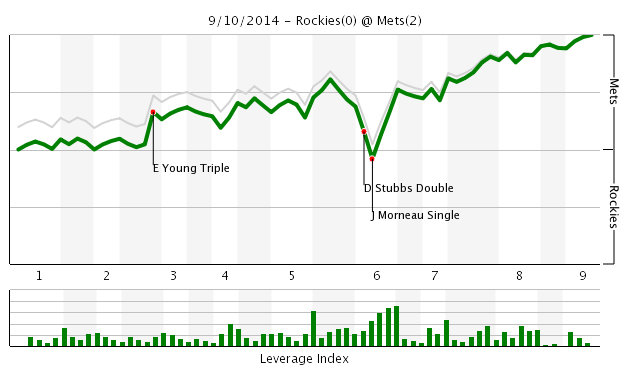