Steven Matz, a Mets prospect on the rise

The Long Island lefty has faced and conquered a great deal of adversity in his meteoric rise to the top of the Mets' farm system.

Share All sharing options for: Steven Matz, a Mets prospect on the rise

Back in 2009, the Mets did not have a draft pick in the first round of the MLB Amateur Draft. Addressing a team weakness, then-GM Omar Minaya signed Francisco Rodriguez and surrendered the team's first-round draft pick to the Los Angeles Angels as compensation. Their first pick came in the second round at 72nd overall, and with it, they selected Steven Matz, a left-handed pitcher out of Ward Melville High School in Suffolk County. His selection wasn't controversial, but it certainly had its detractors. Despite an electric fastball, some saw the young lefty as a lot less polished and experienced than pitchers that were still available to be drafted, and because of choppy mechanics, others believed that he would be injury prone. Because he signed at the August deadline, Matz did not get into any in-game action in 2009. 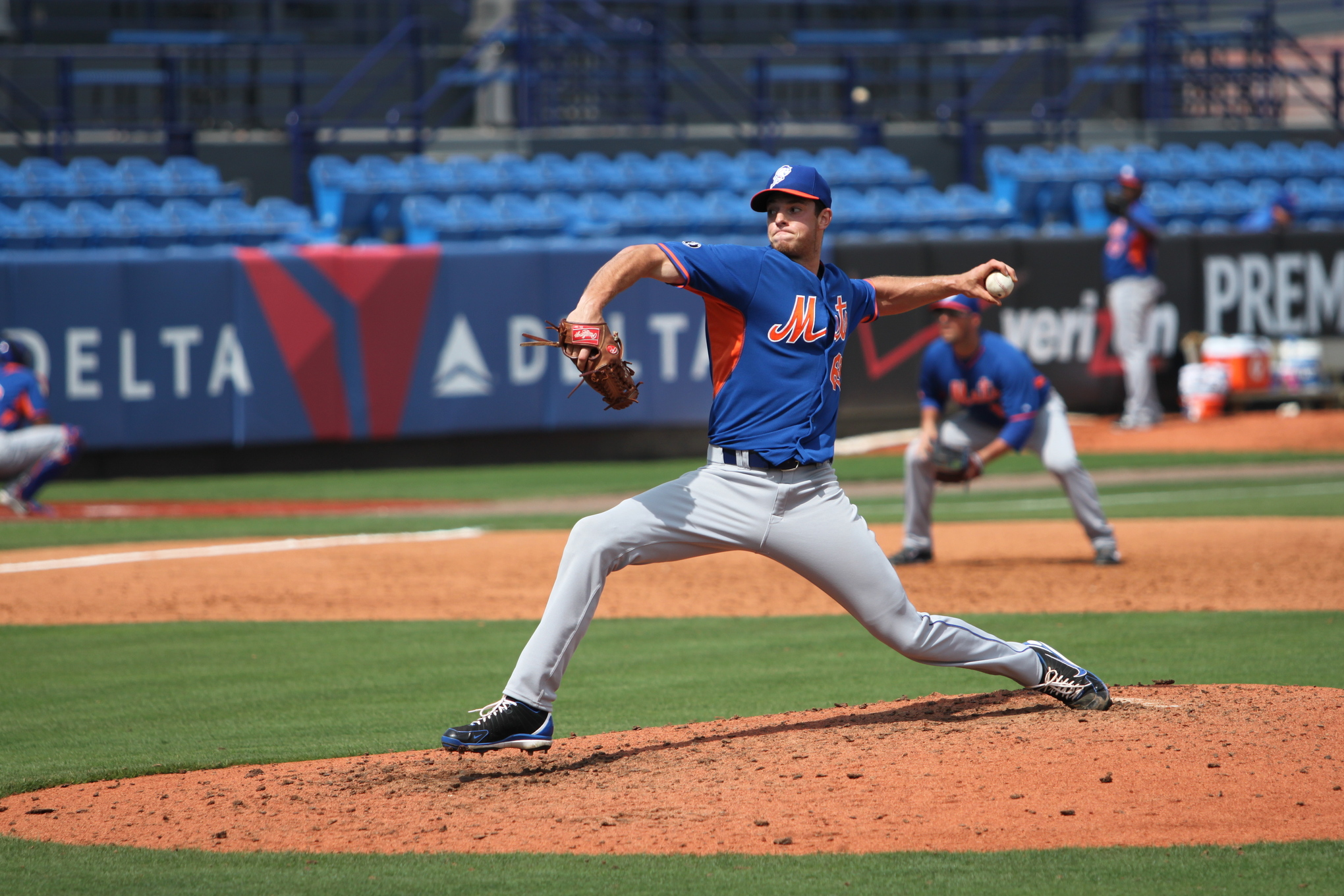 The youngster reported to his first camp the following year. During extended spring training in mid-May, Matz began feeling discomfort in his left elbow. He was sent back north to New York to undergo medical tests, and it was discovered that he had an 80 percent tear in his UCL and needed to undergo Tommy John surgery. His professional baseball debut was over before it even began. With the recovery time for Tommy John roughly an entire year, all of 2010 was a wash. Over the course of the 2011 season, he attempted to get back on the mound, but scar tissue and lingering tightness foiled him at every opportunity. After a handful of doctor visits, the team decided to shut the lefty down for the season, and another year was wasted.

Finally, on June 20, 2012, Matz made his minor league debut. Assigned to the Kingsport Mets, the lefty pitched three-plus innings against the Princeton Rays in what would go on to be a 10-7 loss to Tampa Bay's Appalachian League affiliate. Matz made a few more starts with Kingsport, but his season came to an abrupt end because of discomfort in his shoulder, later diagnosed as shoulder tendonitis. All in all, he made six starts and pitched 29 innings. His 1.55 ERA and 34 strikeouts (10.6 K/9) were very impressive, but his 17 walks (5.3 BB/9) were a bit worrisome.

Ultimately, though, Matz's poise and stuff took precedent over the numbers. In that regard, he passed with flying colors. He featured a fastball sat in the low 90s with late life, a promising curveball that was seen as his best breaking pitch, and a developing slider and changeup. Mechanical flaws in his delivery—mainly rushing his top half—hurt his command because they produced an inconsistent release point, but such issues are common among young pitchers who miss significant playing time. Matz had a solid foundation, and with more time and work, those kinks could be worked out to harness his stuff. As Paul DePodesta told Newsday earlier this year, "We would walk away [from his starts] thinking 'this is electric.'"

In 2013, his age-22 season, Matz was assigned to the Savannah Sand Gnats. He made his first start of the season on April 6 against the Rome Braves, and over the course of his next 21 starts (106.1 innings), the left-hander reminded everyone why he was selected 72nd overall in the 2009 draft. He carved through the South Atlantic League. For the season, he posted a 2.62 ERA with 121 strikeouts (10.2 K/9) and 38 walks (3.2 BB/9). The lefty carried his success into the postseason as well. He did not allow a single run in 12.1 innings, giving up five hits and striking out a whopping 17 batters, helping Savannah clinch the South Atlantic League championship.

According to a scout who spoke to Newsday's Marc Carig, "there's nothing about him that would suggest that he missed a lot of time". That is not to say that Matz was without his flaws. According to that same scout, "[He] lacks confidence in his breaking ball...He really needs a breaking ball he can rely on, otherwise he's a left-handed [bullpen] piece". Jeff Paternostro concurred, noticing that in his own game observations, the Matz mostly relied on his fastball.

As Matz recounted to Robert Brender on Mets Minor League Blog in May 2014, despite the good numbers and positive reports, he still had a lot of work to do. Working with Frank Viola and Ron Romanick during the 2013 season, and then with Mets pitching coach Dan Warthen and St. Lucie Mets pitching coach Phil Regan in 2014, the Long Island native implemented various changes to better his overall game. He scrapped the slider that he had been working on to focus more on his curveball and changeup. He fine-tuned his delivery to throw more over-the-top, to keep his timing better and get the ball down in the zone. Perhaps most importantly, the lefty worked on ‘throwing with conviction.'

"Last year I worked with Frank [Viola] a lot, and his big thing was throwing them with conviction", Matz told Brender. "The more I throw them now, the better they get. I throw pitches with conviction in the game. During my sides, I work on them and everything is coming together with them. The more I throw them, the more comfortable I feel and the better it's getting. Frank is a guy with tons of experience. He really helped me with the mental part of the game...Frank was awesome with the mental part, which is really what I needed last year to get me kick started in my career."

The changes and refinements that Matz implemented served him well for the 2014 season, a year that can accurately be described as a coming out party for the 23-year-old. He began the season with the St. Lucie Mets and dominated the Florida State League. He made 12 starts with them, tossing 69.1 innings, and posted a 2.21 ERA with 62 strikeouts (8.0 K/9) and 21 walks (2.7 BB/9). Midseason, Matz was promoted to the Binghamton Mets, the Mets' Eastern League affiliate. It is said that the jump from High-A to Double-A is the most difficult for minor league players, as the most advanced hitting and pitching prospects are generally found in the Eastern, Southern, and Texas Leagues. For as good as Matz was in St. Lucie, he was better in Binghamton.

In the face of stiffer competition, the left-hander stepped up his own game. He made 12 starts with the B-Mets, pitching 71.1 innings. He posted a 2.27 ERA with 69 strikeouts (8.7 K/9) and 14 walks (1.8 BB/9). Putting the finishing touches on an excellent season, Mats threw 7.1 no-hit innings in Game 3 of the Eastern League Championship Series against the Richmond Flying Squirrels, a game Binghamton would eventually go on to win, capturing its first Eastern League championship in twenty years.

Steven Matz's story has been one of highs and lows and overcoming adversity. Armed with an electric arsenal of pitches and, perhaps most importantly, a clean bill of health, the Long Island lefty has already conquered the South Atlantic League, the Florida State League, and the Eastern League. With the 2014 season in the books, it looks as if he will be looking to tame the Pacific Coast League for some portion of 2015. After that, the green grass of Flushing will be beckoning.